Plastic waste is now polluting all of the world's ecosystems, even those located far from civilisation. The impact of this on the food chain is still unclear. A laboratory study by the Swiss Federal Institute for Forest Snow and Landscape Research WSL published in iForest has now shown that forest trees also take up plastic particles through their roots and transport them to the above-ground tissues of the plant.

Plastic is a petroleum product that is extremely slow to decompose. According to the German Nature and Biodiversity Conservation Union, a plastic bag takes 10 to 20 years, a plastic straw 200 years and a plastic bottle 450 years to decompose. During decomposition, these objects are ground into ever-smaller particles over time. These are known as microplastics (particles smaller than 5 mm) or nanoplastics (particles smaller than 1,000 nanometres). Nanoplastic particles in particular pose a potential hazard to living organisms, as these can absorb the particles. The particles accumulate in the tissue and there are indications that they can cause chronic inflammation.

Only a handful of studies have as yet been conducted into whether plants absorb nanoplastics via their roots, with no studies focusing on forest trees. Previous studies on onions point to nanoplastics being able to damage root cells and thus inhibit root growth. 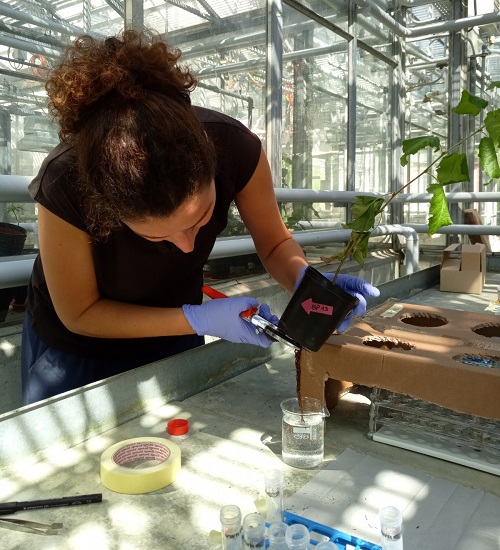 Environmental scientist Maria Elvira Murazzi cuts off the lower roots of a birch seedling for analysis, following immersion in a nanoplastic solution.

Led by Arthur Gessler from the WSL Ecosystem Ecology Group, a research team has now investigated the uptake of nanoplastics in three common species of forest tree, namely birch, spruce and sessile oak. To this end, the researchers labelled polystyrene nanoparticles measuring 28 nanometres with the heavy carbon variant 13C and added them to water, which was then administered to the lower roots of tree seedlings.

Researchers were able to detect 13C in the plant tissue after one to four days, mostly in those parts of the roots in direct contact with the water mixed with nanoplastics. However, small amounts of nanoplastics also accumulated in the upper parts of the roots and in the leaves. In the birch, which consumes large volumes of water, significant amounts of nanoplastics were also deposited in the trunk. As such, the researchers speculate in the iForest article that the nanoparticles are transported via the xylem, the vessels that move water around the plant.

How alarming is this finding for the environment? The quantities absorbed were very small, explains Gessler. "However, if trees are exposed to these concentrations for years on end, we can definitely expect that significant volumes will be transported to and consequently accumulate in the leaves, trunk and branches." Plants form the foundation of the food chain and so plastic could enter forest ecosystems through them. The team is now conducting further experiments to determine whether nanoplastics interfere with photosynthesis, more specifically the photochemical reaction of the seedlings, and consequently affect plants' nutrition. Gessler believes that only by banning single-use plastic packaging wherever feasible and recycling as much as possible can we solve the problem posed by plastic.