Incorporating various minerals in collagen puts these composite materials under stress and makes them particularly hard and strong.

What engineers discovered only about 100 years ago has been used by nature for as long as vertebrates have existed. Just as steel wires under strain increase the fracture resistance of prestressed concrete, bones become particularly hard and strong because their collagen fibres are under stress due to embedded mineral nanoparticles. This stress is also transferred to the particles.

A team from the Max Planck Institute of Colloids and Interfaces has observed that not only hydroxyapatite (which forms the mineral component of bones) but also other minerals with different crystal structures create prestress in the material. For the first time, the researchers have followed live how the stress builds up in the collagen and mineral particles when they precipitate within the protein fibres. The findings could be used to develop collagen-based hybrid materials for medical applications, among other things. 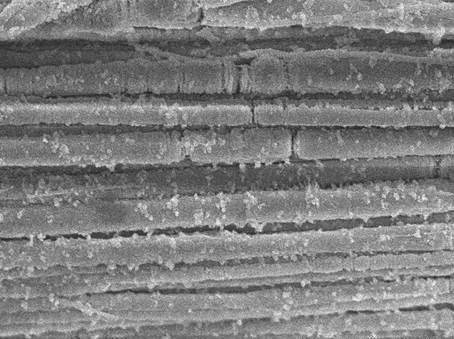 Stressed by mineral particles: Scanning electron microscopy shows that nanocrystals of strontium carbonate have become embedded within the collagen fibres of a tendon. These put the collagen under strain in the same way as hydroxyapatite particles, which form the mineral component of bone. The fact that mineral substances create prestress in collagen fibers according to the principle that engineers also use in prestressed concrete is thus apparently a universal effect of mineralization.

There had initially been a troublesome difficulty with one experiment. Hang Ping, a guest scientist at the Max Planck Institute of Colloids and Interfaces, wanted to investigate in the laboratory whether hydroxyapatite and other minerals intercalate in collagen. To do so, he fixed pieces of tendon, which is largely made of collagen, to glass plates with two adhesive strips. But as the minerals migrated from a solution into the protein bundles, the tendon pulled out from under the tape. This happened with every experiment. This was not only a hindrance to the experiment but also puzzling in itself. Hang Ping quickly agreed with Wolfgang Wagermaier, Research Group Leader at the Max Planck Institute of Colloids and Interfaces, and Peter Fratzl, Director at the Potsdam institute, that this was an exciting research question.

When the researchers systematically approached the problem, they found that the tendon as well as the mineral particles embedded in it were actually subjected to stress after mineral particles had become embedded in the bundles of collagen fibres. And the stress was immense: 100 kg/cm2, which corresponds to a force about 100 times greater than typical forces in muscles. A similar effect is used by engineers in prestressed concrete for bridges. It apparently also helps to give bones their special hardness and strength. The team has now examined this even more closely. Hang Ping and his colleagues found that collagen is also subjected to tensile stress when nanocrystals of other minerals build up within its fibres. “This is surprising because the effect occurred also in minerals with crystal structures different from that of hydroxyapatite”, says Wagermaier. “It would have been obvious that this works only with the special constellation of collagen and hydroxyapatite. But it is apparently a universal principle”.

However, in their current work, the researchers not only established the universality of the effect but also followed how the tensile stress gradually built up as the nanocrystals grew within the collagen fibres. “Such in operando studies are quite demanding from an experimental perspective”, says Wagermaier. The team therefore used a special experimental set-up and observed the process at the particularly powerful X-ray source of the synchrotron Bessy II in Berlin-Adlershof. After the interaction of collagen and minerals had created the prestress, the researchers heated the composite material in order to relieve the stress due to the mineral. This provided proof that the prestress is indeed caused by the mineralization process.

“This universal mechanism of the mineralization of organic fibre tissues could be transferred to technical hybrid materials in order to achieve high fracture resistance”, says Fratzl. Composite materials made of collagen and mineral nanoparticles could thus be developed specifically for implants according to the blueprint of bone. However, mineralization could also strengthen synthetic polymers if they have a structure similar to that of collagen. The findings of the Potsdam team are not only relevant for the design of new materials. “It is also interesting from a medical or biological point of view to understand what happens in the process of mineralization in bones”, says Wagermaier. “Many bone diseases are associated with changes in the mineral content of bones and thus their altered properties”. A better understanding of how mineralization affects the properties of bones could therefore provide new starting points for treating bone diseases such as osteoporosis. It may someday be possible to rehabilitate bone with mineralization defects in the same way as derelict bridges.