Researchers from Stanford University and Harvard University have developed a new method of volumetric 3D printing capable of fabricating resin parts without the need for any support structures.

The approach relies on a nanoparticle-laden resin material that only hardens when it’s blasted with a very focused laser spot. By varying the focus of the laser throughout the resin vat, the researchers have made it possible to print at any point in the pool of resin, not just at the surface layer.

As such, the novel 3D printer doesn’t necessarily need to print objects from the bottom-up on a layer-by-layer basis, paving the way for abstract geometries that can be ‘added to’ from virtually any direction.

“Because our resin is self-supporting during the printing process, we don’t need to print any supports, making post-processing of the parts much simpler,” says Dan Congreve, co-author of the study. “Because we aren’t confined to this layer-by-layer process, we can print structures such as overhangs which are traditionally challenging. This is a brand-new technology, and we are just starting to scratch the surface of what it’s capable of.”

On first inspection, the Stanford 3D printing method looks a lot like conventional stereolithography (SLA). A laser beam is directed at resin in a vat, which cures when it’s exposed to blue light. However, the team didn’t just use a standard blue laser as this would cure the resin along the entire length of the penetrating beam.

Instead, they leveraged a special resin containing light-converting nanoparticles just 80nm in diameter. The nanoparticles are designed to convert red light into blue light when a critical energy threshold is hit, which can only be achieved when the laser is at maximum focus. As such, the technique utilizes a standard red laser instead, with a mechanism for diluting and focusing that red laser.

The novel setup eliminates the need to cure exclusively at the surface layer, making it possible to cure individual points in a resin vat by only focusing the red laser at the desired XYZ coordinates. The team states that one or more lasers can be rotated around the vat to print volumetrically from virtually every direction at the same time, enabling any geometry without supports. 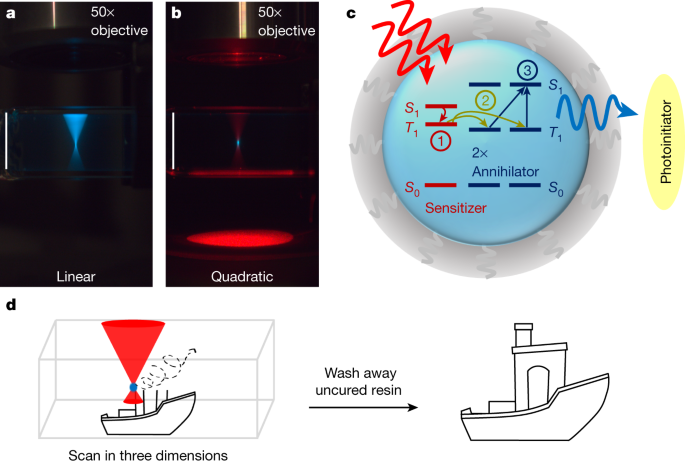 The point of maximum focus is where the resin turns red light into blue light, curing the material.

The mechanism for transforming one wavelength of light into another is called triplet fusion upconversion and it’s Congreve’s specialism.

“I got interested in this upconversion technique back in grad school,” he adds. “It has all sorts of interesting applications in solar, bio, and now this 3D printing. Our real specialty is in the nanomaterials themselves – engineering them to emit the right wavelength of light, to emit it efficiently, and to be dispersed in resin.”

To formulate the special resin mix, the team turned the active upconversion molecules into nanoscale droplets and coated them in a shielding silica layer. The resulting nanocapsules were distributed throughout the resin matrix to form the final light-converting composite.

“Figuring out how to make the nanocapsules robust was not trivial – a 3D-printing resin is actually pretty harsh,” said Tracy Schloemer, one of the lead authors of the study. “And if those nanocapsules start falling apart, your ability to do upconversion goes away. All your contents spill out and you can’t get those molecular collisions that you need.”

The researchers are currently in the process of exploring other applications for the light-converting nanocapsules. Potential use cases include more efficient solar panels, whereby low-energy light can be converted into a wavelength that solar cells can more easily capture. They can also be used to study biological models that use light to power chemical reactions.

Further details of the study can be found in the paper titled ‘Triplet fusion upconversion nanocapsules for volumetric 3D printing’.

Despite the novelty of their 3D printer, the Stanford researchers aren’t the first to explore the concept of volumetric 3D printing. A research team from Utrecht University recently successfully fabricated working livers using a newly developed ultrafast volumetric 3D bioprinting method. Printed in less than 20 seconds, the liver units were able to perform key toxin elimination processes mimicking those that natural livers perform in our bodies, and could open new opportunities for regenerative medicine and personalized drug testing.