Tissue engineering and nanofabrication created a miniature working model of a heart chamber.

In recent years, scientists have been using biomimetic tissue models—reconstructed tissues designed to replicate the attributes of living tissue—to study disease and development in the human body. The heart, however, is a different story. Even though advances in stem cell research now make it easier to grow cardiac tissue, replicating a functioning human heart in a lab remains complicated.

To address this gap, a multidisciplinary research team has developed a miniature replica of a heart chamber that brings together advanced stem-cell technologies and nanoengineering. Named the miniaturized Precision-enabled Unidirectional Microfluidic Pump (miniPUMP), the device comprises a hollow, microscopic, cylindrical scaffold built using precision 3D printing. This scaffold forms a framework for the cardiac tissue, which is made of heart muscle cells derived from human stem cells. The device mimics the lower heart chamber, the ventricle.

And just like a real heart, the tissue beats spontaneously, says Christos Michas, a biomedical researcher at Boston University and lead author of the study. The device is submerged in cell media containing glucose and other nutrients that the cells need to survive. “It’s possible to make the tissue beat by simulating [it] electrically, [but] you don’t need to. You just assemble it, and it just does its own thing,” he says. 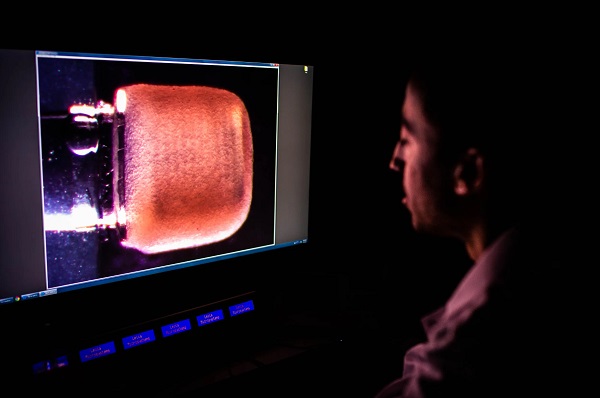 Christos Michas takes a real-time side view image of the miniPUMP in the lab. The scaffold that gives structure to the heart cells—without exerting any active force on them—can be seen through the tissue.

The novelty of the miniPUMP, Michas explains, is the marrying of nanofabrication and tissue engineering in a way that hasn’t been considered before. “With the nanoengineered parts, we were able to replicate different aspects of the heart—specifically, the chamber, which contracts and then springs back, and also the valves that regulate the flow of the blood,” he says. They were thus able to mimic some aspects of heart function, such as pressure and the volume of fluid pumped, that has so far not been represented in research literature. “By doing that, we have access to more metrics of the performance of the heart, so we can have a better model of the heart.”

Apart from the convenience of having scaled-down organ models for research, the miniaturization of the device has further advantages, says coauthor Alice White, mechanical engineering chair at Boston University. First, it doesn’t use a lot of stem cells, which are a precious commodity. “[It] also means that we could maybe do lots of things in parallel in a relatively small space,” White says. The other big advantage, she adds, is that their mini heart chamber is compatible with other organ-on-a chip technologies that are being developed.

The chip in question, Michas explains, is a microfluidic chip that's lined with living human cells. The team used a 3D-printing technique called two-photon direct-laser writing, in which a biocompatible liquid resin solidifies in contact with the laser. “It didn’t really matter what the material was, as long as it could maintain its structure and have very fine features,” he adds. Precision fabrication was crucial given that many of the miniPUMP components were smaller than a dust particle, and the whole thing was smaller than a postage stamp. 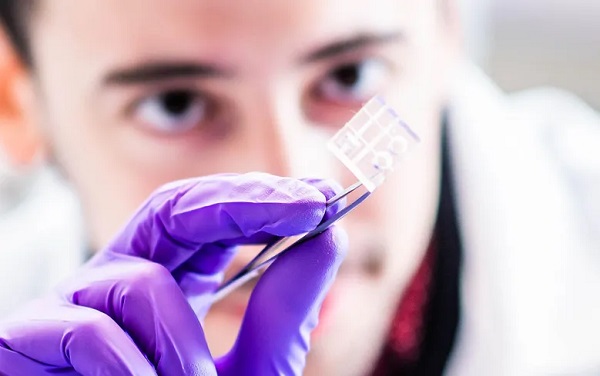 A miniature replica of a heart chamber made from engineered parts and tissue from stem cells—and all contained on a chip not much bigger than a postage stamp—could help researchers study disease and test new treatments.

One of the biggest challenges for the team was replicating the pumping function of the heart. “First of all, you need a cardiac chamber—something that resembles a balloon—so it can contain fluid,” says Michas. “[Arranging] the tissue on such a small scale, in a 3D format, is very challenging, because the tissue on its own would collapse into a sphere.” This is where the microengineered scaffold came into use.

The second aspect, Michas adds, is that the fluid must flow in a directional manner, just like it does in the heart. “That means that we had to have valves, but the valves that we would need for such a scaled-down system would be extremely sensitive to pressure.” Once again, fine-resolution 3D printing enabled that.

Michas and his colleagues’ mini heart chamber continued to beat in the lab for three weeks. “We did not conduct a full study to see the effect of therapeutic treatments on the heart, but with the proper adjustments, I’m pretty confident that it will last for months,” Michas says.

This longevity, as well as replicating the natural beating mechanism of the heart muscle, provides scientists opportunities to study the heart as well as test the effectiveness of therapeutics with no risk to human patients. Apart from drug development and testing, Michas sees other possibilities too, such as disease modeling. “We know that in the case of hypertension, the heart, over time, changes the way it beats, how much blood it can pump, how fast it [does so],” he says. “So, if we want to understand this better and develop therapies, then we need to have easily accessible models to replicate it. The miniPUMP could be used for that [by controlling valve pressure]. That is one of the additional metrics that other systems usually lack.”

Another possibility, Michas says, is in developing advanced therapies, like gene therapies. “These allow us, again, to replicate a little bit of the process of those therapies and see if they [work] or not.” Lastly is modeling human development. “That is a very complicated scientific question, and models like this, to some extent, could help us better understand how the body forms during embryo development.”