A New Method for Exploring The Nano-world

Scientists at the Max Planck Institute for the Science of Light (MPL) and Max-Planck-Zentrum für Physik und Medizin (MPZPM) in Erlangen present a large step forward in the characterization of nanoparticles. They used a special microscopy method based on interfereometry to outperform existing instruments. One possible application of this technique may be to identify illnesses. 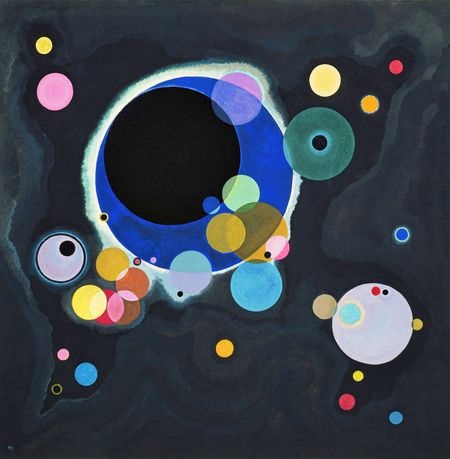 The painting called Several Circles by Vasily Kandinsky (1926) wonderfully depicts a typical situation, where nanoparticles of different sizes and material coexist in a sample. iNTA offers a particularly high resolution in identifying these different populations.

Technically, one calls something a nanoparticle when its size (diameter) is smaller than one micrometer (one thousandth of a millimeter). Objects of the order of one micrometer can still be measured in a normal microscope, but particles that are much smaller, say smaller than 0.2 micrometers, become exceedingly difficult to measure or characterize. Interestingly, this is also the size range of viruses, which can become as small as 0.02 micrometers.

Over the years, scientists and engineers have devised a number of instruments for characterizing nanoparticles. Ideally, one wants to measure their concentration, assess their size and size distribution, and determine their substance. A high-end example is an electron microscope. But this technology has many shortcomings. It is very bulky and expensive, and the studies take too long because samples have to be carefully prepared and be put into vacuum. And even then, it remains difficult to determine the substance of the particles one sees in an electron microscope.

A quick, reliable, light and portable device that can be used in the doctor’s office or in the field would have a huge impact. A few optical instruments  on the market offer such solutions, but their resolution and precision have been insufficient for examining smaller nanoparticles, e.g., much smaller than 0.1 micrometer (or otherwise said 100 nm).

A group of researchers at the Max Planck Institute for the Science of Light and Max-Planck-Zentrum für Physik und Medizin have now invented a new device that offers a big leap in the characterization of nanoparticles. The method is called iNTA, short for Interferometric Nanoparticle Tracking Analysis. Their results are reported in the May issue of the internationally renowned magazine Nature Methods.

The method is based on the interferometric detection of the light scattered by individual nanoparticles that wander around in a liquid. In such a medium, thermal energy perpetually moves particles in random directions. It turns out that the space that a particle explores in a given time correlates with its size. In other words, small particles move “faster” and cover a bigger volume than large particles. The equation that describes this phenomenon – the Stokes-Einstein relation - dates back to the beginning of the last century and since then has found use in many applications. In a nutshell, if one could follow a nanoparticle and collect statistics about its jittery trajectory, one could deduce its size. So, the challenge is to record very fast movies of tiny particles wizzing by.

Scientists at MPL have developed a special microscopy method over the past two decades, known as interferometric scattering (iSCAT) microscopy. This technique is extremely sensitive in detecting nanoparticles. By applying iSCAT to the problem of diffusing nanoparticles, the MPL group realized that they can outperform the existing instruments on the market. The new technology has a particular edge in deciphering mixtures of nanoparticles with different sizes and different materials. 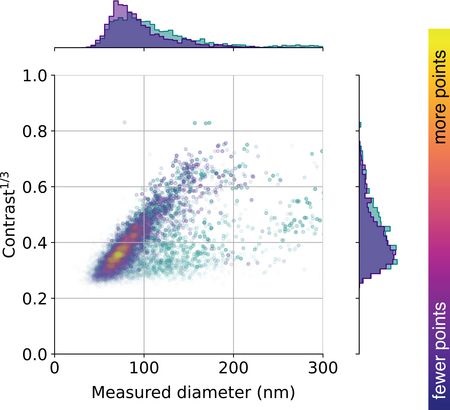 This figure shows the distribution of vesicles extracted from the urine of a healthy person as a function of vesicle size and iSCAT contrast (i.e., how strongly they scatter light). Currently, the researchers are investigating such distributions in conjunction with various diseases.

The applications of the new method are manifold. A particularly exciting line of applications concerns nano-sized vehicles that are secreted from cells, the so-called extracellular vesicles. These are made of a lipid shell, much like a nano soap bubble. But the shell and the inner liquid also contain proteins, which tell us about the origin of the vesicles, i.e. from which organ or cellular process. When the protein amount and/or the vesicle size deviate from the normal range, it could be that the person is ill. Therefore, it is very important to find ways to characterize extracellular vesicles.

The researchers at the MPL and MPZPM are now working on developing a bench-top system to enable scientists worldwide to benefit from the advantages of iNTA.

Read the original article on Max Planck Institute for the Science of Light.