Scientists have synthesized the first belt-shaped molecular nanocarbon with a twisted Möbius band topology--a Möbius carbon nanobelt--that paves the way for the development of nanocarbon materials with complex topological structures. 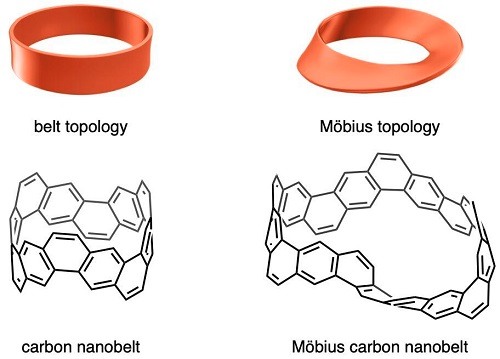 Belt topology compared with Möbius topology (top), and the structures of carbon nanobelts with these topologies (bottom).

"The Möbius carbon nanobelt was a dream molecule in the scientific community after we reported the first chemical synthesis of a carbon nanobelt--an ultra-short carbon nanotube--in 2017. Just like belts we use every day, we imagined what would happen to our 'molecular belt' when tightened with a twist. It's another amazingly beautiful molecule," says Kenichiro Itami, leader of the research group. Such a twisted Möbius carbon nanobelt should manifest quite different properties and molecular motions compared to those with a normal belt topology. However, creating this twist is easier said than done. "We knew from our previous synthesis of carbon nanobelts that the strain energy is the biggest hurdle in the synthesis. Moreover, the additional twist within the belt structure makes the strain energy of the final target molecule even higher. The key to the success in the actual synthesis was our molecular design and detailed examination of the reaction conditions," says Yasutomo Segawa, a co-leader of the project. 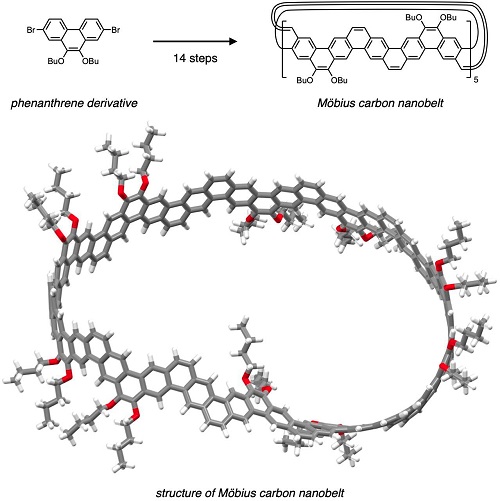 The structure of the Möbius carbon nanobelt synthesized in this research.

The rational synthetic route was determined by using the theoretical analysis of the huge strain derived from both the belt-shape and twisted molecular structure of Möbius carbon nanobelt. The Möbius carbon nanobelt was synthesized in 14 chemical reaction steps including a newly developed functionalization reaction, Z-selective Wittig reaction sequence, and strain-inducing nickel-mediated homocoupling reaction. Spectroscopic analysis and molecular dynamics simulation reveal that the twist moiety of the Möbius band moves quickly around the Möbius carbon nanobelt molecule in solution. The topological chirality originating from the Möbius structure was confirmed experimentally using chiral separation and circular dichroism spectroscopy.

Looking back in history, new forms of carbon and nanocarbons have consistently opened doors to new science and technology and have led to the discovery of extraordinary (and often unpredictable) properties, functions, and applications. The present work is a pioneering achievement that paves the way for the development of nanocarbon materials with complex topological structures and the birth of innovative materials science using Möbius topology.