Forming metal into the shapes needed for various purposes can be done in many ways, including casting, machining, rolling, and forging. These processes affect the sizes and shapes of the tiny crystalline grains that make up the bulk metal, whether it be steel, aluminum or other widely used metals and alloys.

Now researchers at MIT have been able to study exactly what happens as these crystal grains form during an extreme deformation process, at the tiniest scales, down to a few nanometers across. The new findings could lead to improved ways of processing to produce better, more consistent properties such as hardness and toughness.

The new findings, made possible by detailed analysis of images from a suite of powerful imaging systems, are reported today in the journal Nature Materials, in a paper by former MIT postdoc Ahmed Tiamiyu (now assistant professor at the University of Calgary); MIT professors Christopher Schuh, Keith Nelson, and James LeBeau; former student Edward Pang; and current student Xi Chen. 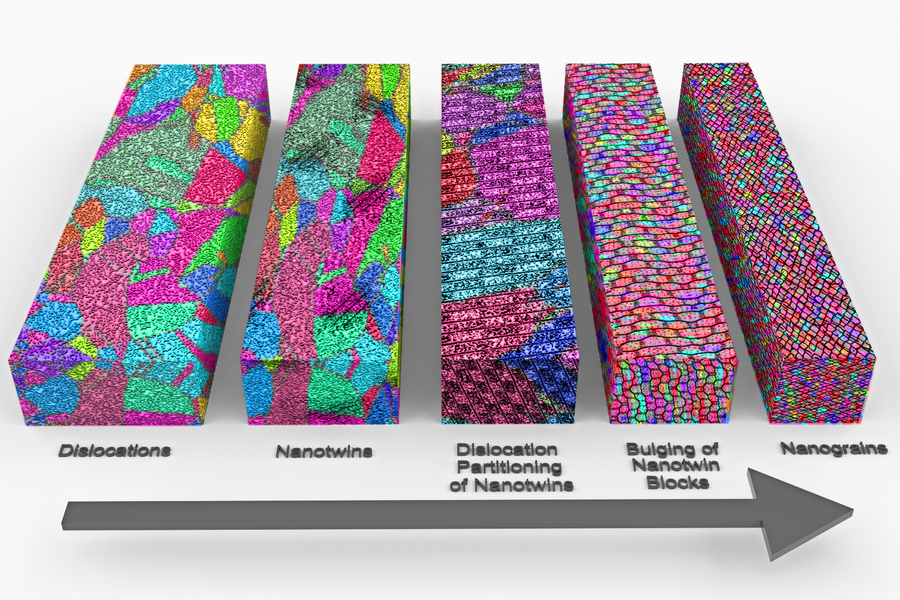 For the first time, researchers have described how the tiny crystalline grains that make up most solid metals actually form. Understanding this process, they say, could theoretically lead to ways of producing stronger, lighter versions of widely used metals such as aluminum, steel and titanium.

“In the process of making a metal, you are endowing it with a certain structure, and that structure will dictate its properties in service,” Schuh says. In general, the smaller the grain size, the stronger the resulting metal. Striving to improve strength and toughness by making the grain sizes smaller “has been an overarching theme in all of metallurgy, in all metals, for the past 80 years,” he says.

Metallurgists have long applied a variety of empirically developed methods for reducing the sizes of the grains in a piece of solid metal, generally by imparting various kinds of strain through deforming it in one way or another. But it’s not easy to make these grains smaller.

The primary method is called recrystallization, in which the metal is deformed and heated. This creates many small defects throughout the piece, which are “highly disordered and all over the place,” says Schuh, who is the Danae and Vasilis Salapatas Professor of Metallurgy.

When the metal is deformed and heated, then all those defects can spontaneously form the nuclei of new crystals. “You go from this messy soup of defects to freshly new nucleated crystals. And because they're freshly nucleated, they start very small,” leading to a structure with much smaller grains, Schuh explains.

What’s unique about the new work, he says, is determining how this process takes place at very high speed and the smallest scales. Whereas typical metal-forming processes like forging or sheet rolling, may be quite fast, this new analysis looks at processes that are “several orders of magnitude faster,” Schuh says.

Such a high-speed process is not just a laboratory curiosity, he says. “There are industrial processes where things do happen at that speed.” These include high-speed machining; high-energy milling of metal powder; and a method called cold spray, for forming coatings. In their experiments, “we’ve tried to understand that recrystallization process under those very extreme rates, and because the rates are so high, no one has really been able to dig in there and look systematically at that process before,” he says.

Using a laser-based system to shoot 10-micrometer particles at a surface, Tiamiyu, who carried out the experiments, “could shoot these particles one at a time, and really measure how fast they are going and how hard they hit,” Schuh says. Shooting the particles at ever-faster speeds, he would then cut them open to see how the grain structure evolved, down to the nanometer scale, using a variety of sophisticated microscopy techniques at the MIT.nano facility, in collaboration with microscopy specialists.

The result was the discovery of what Schuh says is a “novel pathway” by which grains were forming down to the nanometer scale. The new pathway, which they call nano-twinning assisted recrystallization, is a variation of a known phenomenon in metals called twinning, a particular kind of defect in which part of the crystalline structure flips its orientation. It’s a “mirror symmetry flip, and you end up getting these stripey patterns where the metal flips its orientation and flips back again, like a herringbone pattern,” he says. The team found that the higher the rate of these impacts, the more this process took place, leading to ever smaller grains as those nanoscale “twins” broke up into new crystal grains.

In the experiments they did using copper, the process of bombarding the surface with these tiny particles at high speed could increase the metal’s strength about tenfold. “This is not a small change in properties,” Schuh says, and that result is not surprising since it’s an extension of the known effect of hardening that comes from the hammer blows of ordinary forging. “This is sort of a hyper-forging type of phenomenon that we’re talking about.”

In the experiments, they were able to apply a wide range of imaging and measurements to the exact same particles and impact sites, Schuh says: “So, we end up getting a multimodal view. We get different lenses on the same exact region and material, and when you put all that together, you have just a richness of quantitative detail about what’s going on that a single technique alone wouldn't provide.”

Because the new findings provide guidance about the degree of deformation needed, how fast that deformation takes place, and the temperatures to use for maximum effect for any given specific metals or processing methods, they can be directly applied right away to real-world metals production, Tiamiyu says. The graphs they produced from the experimental work should be generally applicable. “They’re not just hypothetical lines,” Tiamiyu says. For any given metals or alloys, “if you’re trying to determine if nanograins will form, if you have the parameters, just slot it in there” into the formulas they developed, and the results should show what kind of grain structure can be expected from given rates of impact and given temperatures.