Scientists working at DESY’s PETRA III light source have been able to generate the first synchrotron-based X-ray map of the whole body of an organism at such a high resolution that contaminants could be detected at the individual cell level. The research team was able to identify cerium nanoparticles in the digestive system of the roundworm Caenorhabditis elegans while also determining that the nanoparticles showed relatively low toxicity. The results from PETRA III were corroborated by fluorescent microscopy, and the method behind the result could prove valuable also for assessment of other environmental pollutants. The results were published in the journal Environmental Science and Technology and involved scientists from the Norwegian University of Life Sciences and the University of Antwerp from the Netherlands.

Nanoparticles exist in various forms in the environment. They are defined as any matter particles that measure below the threshold of a millionth of a metre in width. This research investigated nanoparticles of the rare earth metal cerium, which are among the most manufactured nanomaterials due to their unique properties and application in automobile catalytic converters, fuel cells, and materials that block ultraviolet light. The cerium nanoparticles have thus been detected in the wider environment around industrial sites. The effects of release of such nanomaterials in the environment is uncertain, with previous studies showing inconsistent results on the particles’ potential toxicity.

The entire bodies of the worms are included in the PETRA III dataset. Here, cerium nanoparticles are shown in red, while zinc and iron particles, which are normally found in the worm, are shown in green and blue, respectively.

Ole Christian Lind from the Norwegian University of Life Sciences (NMBU) has been studying a variety of environmental contaminants at synchrotron sources such as PETRA III for the past two decades. Normally, such synchrotron studies are performed on preserved, usually dried, specimens. To reach the goal of performing a full imaging study on an undried specimen, Lind used PETRA III’s P06 beamline, headed by DESY scientist Gerald Falkenberg. As the sample, the scientists used the roundworm Caenorhabditis elegans. “We used C. elegans because it is perhaps the most studied eukaryote model organism on the planet,” says Lisa Rossbach, a postdoc at NMBU who is one of the study’s primary authors.

The scientists exposed the worms to a high concentration of cerium nanoparticles, much higher than those found in the environment. “Using X-ray fluorescence spectroscopy, we managed to piece together an extremely high-resolution picture of roundworms that were preserved in a pristine condition,” says Falkenberg. “We accomplished this by using an extremely narrow X-ray beam to excite the electrons in clusters of the nanoparticles and the worm’s tissues, allowing a full internal picture of the organism and the cerium distribution within it.” The data were so detailed that they allow scientists to view the entire organism while also zooming in on individual parts of cells, allowing the scientists to localise clusters of nanoparticles within.

Lind says: “This is a breakthrough experiment. The ability to map uptake of contaminants at 300-nanometre resolution for full-body X-ray imaging of an intact non-dehydrated organism enables us to address the consequences of pollutants in a totally new way. This is next-level toxicology, where we can in detail show that the presence of a contaminant in a tissue or a cell is directly connected to the effect that it generates.”

The pictures revealed that high concentrations of cerium nanoparticles did not cause acute toxic effects and cleared quickly from the body. “However, cerium did accumulate in the mouthparts and caused deformities to the worms’ food processing apparatus”, says Rossbach. As part of this study, Rossbach also investigated the same tissue malformations using in vivo fluorescence microscopy, corroborating the effect of the nanoparticles by examining levels of oxidative stress in the tissues. 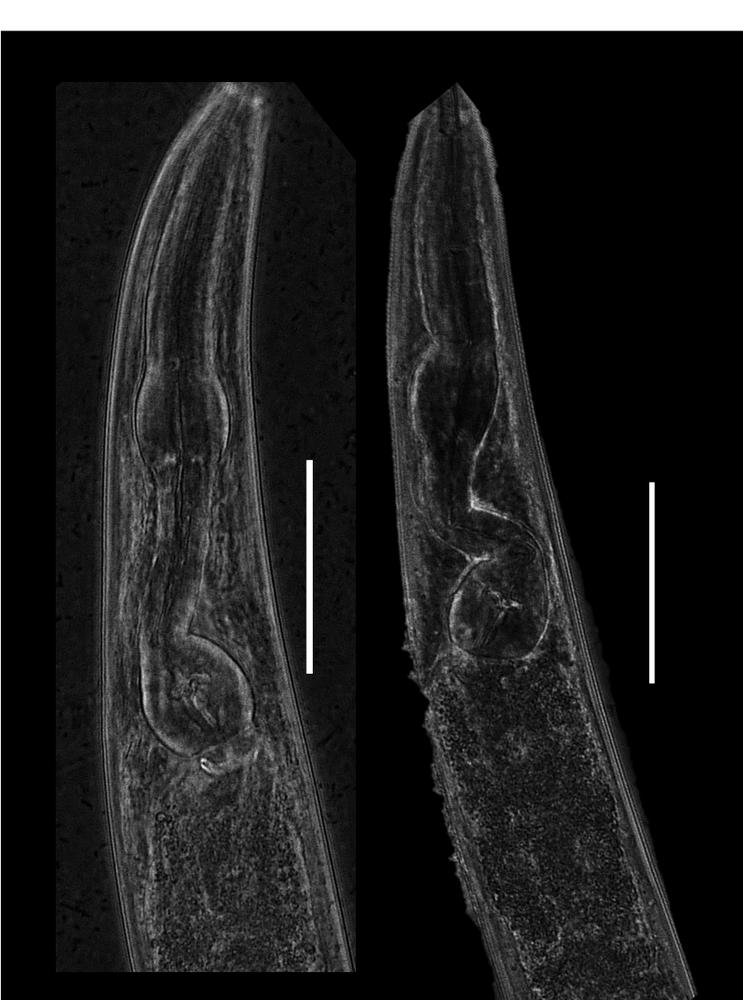 The parts of the roundworm's head that were deformed by the cerium nanoparticles can also be seen in this dataset. The effects on the mouthparts were confirmed by fluorescence microscopy.

The results are also if great interest because cerium is often used as an analogue for radioactive pollutants, which themselves often present themselves as nanoparticles. “In addition to being an interesting result in its own, this paves the way for far more detailed studies on the effects of various kinds of pollution on organisms.” Future experiments could also focus on nanoplastics, which are appearing in even some of the most remote areas of the environment.