A Unique Catalyst Paves the Way for Plastic Upcycling

A recently developed catalyst for breaking down plastics continues to advance plastic upcycling processes. In 2020, a team of researchers led by Ames Laboratory scientists developed the first processive inorganic catalyst to deconstruct polyolefin plastics into molecules that can be used to create more valuable products. Now, the team has developed and validated a strategy to speed up the transformation without sacrificing desirable products.

The catalyst was originally designed by Wenyu Huang, a scientist at Ames Lab. It consists of platinum particles supported on a solid silica core and surrounded by a silica shell with uniform pores that provide access to catalytic sites. The overall amount of platinum needed is quite small, which is important because of platinum's high cost and limited supply. During deconstruction experiments, the long polymer chains thread into the pores and contact the catalytic sites, and then the chains are broken into smaller sized pieces that are no longer plastic material (see image for more details). 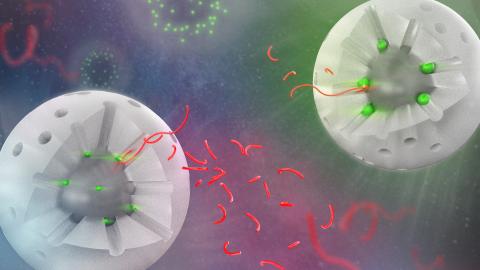 Visual of two variations of the catalyst, with a segment of the shell removed to show the interior. The white sphere represents the silica shell, the holes are the pores. The bright green spheres represent the catalytic sites, the ones on the left are much smaller than the ones on the right. The longer red strings represent the polymer chains, and the shorter strings are products after catalysis. All shorter strings are similar in size, representing the consistent selectivity across catalyst variations. Additionally, there are more smaller chains produced by the smaller catalyst sites because the reaction occurs more quickly.

Aaron Sadow, a scientist at Ames Lab and director of the Institute for Cooperative Upcycling of Plastics (iCOUP), explained that the team crafted three variations of the catalyst. Each variation had identically sized cores and porous shells, but different diameters of platinum particles, from 1.7 to 2.9 to 5.0 nm.

“In the literature, the selectivity for carbon-carbon bond cleavage reactions usually varies with the size of the platinum nanoparticles. By placing platinum at the bottom of the pores, we saw something quite unique,” said Sadow.

Instead, the rate at which the chains were broken into smaller molecules was different for the three catalysts. The larger platinum particles reacted with the long polymer chain more slowly while the smaller ones reacted more quickly. This increased rate could result from the higher percentage of edge and corner platinum sites on the surfaces of the smaller nanoparticles. These sites are more active in cleaving the polymer chain than the platinum located in the faces of the particles.

According to Sadow, the results are important because they show that activity can be adjusted independently from the selectivity in these reactions. “Now, we are confident that we can make a more active catalyst that would chew up the polymer even faster, while using catalyst structural parameters to dial in specific product chain lengths,” he said.

Huang explained that this type of larger molecule reactivity in porous catalysts in general are not widely studied. So, the research is important for understanding the fundamental science as well as how it performs for upcycling plastics.

“We really need to further understand the system because we're still learning new things every day. We are exploring other parameters that we can tune to further increase the production rate and shift the product distribution,” said Huang. “So there are a lot of new things in our list waiting for us to discover.”

This research is further discussed in the paper “Size-Controlled Nanoparticles Embedded in a Mesoporous Architecture Leading to Efficient and Selective Hydrogenolysis of Polyolefins,” authored by X. Wu, A. Tennakoon, R. Yappert, M. Esveld, M.S. Ferrandon, R.A. Hackler, A.M. LaPointe, A. Heyden, M. Delferro, B. Peters, A.D. Sadow, and W. Huang; and published in Journal of the American Chemical Society.