Researchers have developed a multifunctional nanoplatform based on mesoporous hexagonal core-shell zinc porphyrin-silica nanoparticles (MPSNs) loaded with R837, which can be used to integrate PDT, PTT, and tumor-specific immunotherapy for breast cancer.

DONG Wenfei's group from the Suzhou Institute of Biomedical Engineering and Technology (SIBET) of the Chinese Academy of Sciences has recently developed a multifunctional nanoplatform based on mesoporous hexagonal core-shell zinc porphyrin-silica nanoparticles (MPSNs) loaded with R837 (a toll-like receptor-7 agonist), which can be used to integrate PDT, PTT, and tumor-specific immunotherapy for breast cancer.

According to the researchers, MPSNs with zinc phosphide (ZnP) as the core and a mesoporous silica framework as the shell could effectively generate singlet oxygen and convert photons to heat with a single light source.

Meanwhile, the excellent mesoporous structure of the silica shell can facilitate efficient R837 loading. Consequently, the therapeutic strategy based on [email protected] not only eradicated primary tumors via phototherapy modalities (PDT and PTT), but also effectively inhibited distant metastasis due to the strong immune response triggered by the two-way mechanistic interaction. 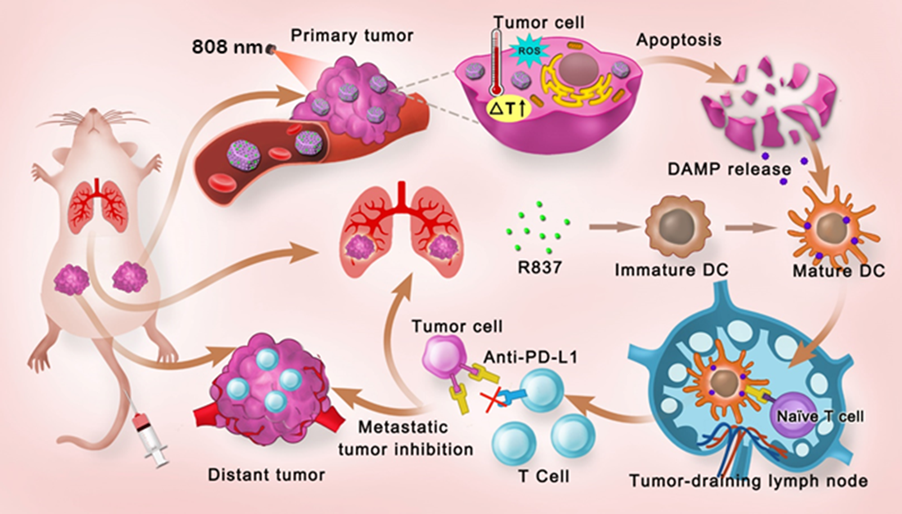 Schematic diagram of nanomaterials for photoimmunotherapy of breast cancer.

This study has been published in Journal of Nanobiotechnology and it was supported by the National Key R&D Program of China and other funds.