A team of researchers has built an intelligent sensor – the size of about 1/1000 of the cross-section of a human hair – that can simultaneously detect the intensity, polarization and wavelength of light, tapping into the quantum properties of electrons. It’s a breakthrough that could help advance the fields of astronomy, health care, and remote sensing.

Researchers have learned in recent years that twisting certain materials at specific angles can form what are known as “moiré materials,” which elicit previously undiscovered properties. In this case, the research team used twisted double bilayer graphene (TDBG) - that is, two atomic layers of natural stacked carbon atoms given a slight rotational twist - to build their sensing device. This is critical because the twist reduces the crystal symmetry, and materials with atomic structures that are less symmetrical - in many cases - promise some intriguing physical properties that aren’t found in those with greater symmetry. 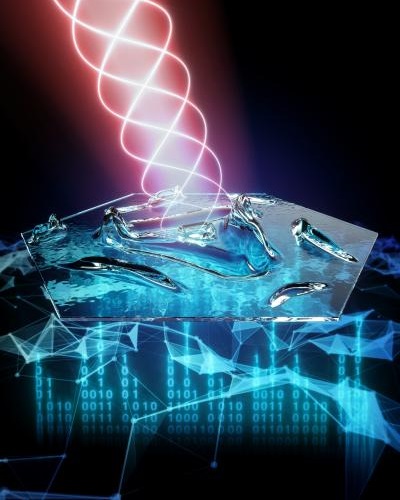 Artistic rendering of the intelligent sensing process: quantum geometric properties determine the photoresponses, which are then interpreted by a neural network.

With this device, the researchers were able to detect a strong presence of what is known as bulk photovoltaic effect (BPVE), a process that converts light into electricity, giving a response strongly dependent on the light intensity, polarization and wavelength. The researchers found that the BPVE in TDBG can further be tuned by external electrical means, which allowed them to create “2D fingerprints” of the photovoltages for each different incident light.

Shaofan Yuan, a graduate student in Xia’s lab and co-lead author of the study, had the idea to apply a convolutional neural network (CNN), a type of artificial neural network previously used for image recognition, to decipher these fingerprints. From there, they were able to demonstrate an intelligent photodetector.

Its small size makes it potentially valuable for applications such as deep space exploration, in-situ medical tests and remote sensing on autonomous vehicles or aircrafts. Moreover, their work reveals a new pathway for the investigation of nonlinear optics based on moiré materials.

“Ideally, one single intelligent device can replace several bulky, complex and expensive optical elements that are used to capture the information of light, dramatically saving space and cost,” said Chao Ma, a graduate student in Xia’s lab, and co-lead author of the study.

Patrick Cheung of University of Texas at Dallas performed theoretical calculations and analysis. Other contributing authors are Drs. Kenji Watanabe, Takashi Taniguchi of National Institute for Materials Science in Japan.