Writing with Light on Titania: Rewritable UV-sensitive Surfaces Made from Doped TiO2 Nanocrystals

Researchers have succeeded in producing a coating material that can be written on using UV light and the writing erased again using oxygen. Changes to rewritable paper could help reduce paper waste in a wide variety of applications. The material is made from three non-toxic components and is produced in a single synthesis step, as described in the journal Angewandte Chemie.

Yadong Yin and his team based at the University of California, Riverside (USA) focused on titania (TiO2) nanocrystals to produce a light-sensitive, rewritable system. Nanocrystalline TiO2, a semiconductor, darkens when irradiated with ultraviolet (UV) light due to charge separation and reduction of titanium atoms. Critically, the color change is not permanent because oxygen in the air re-oxidizes the titanium and causes a return to transparency. 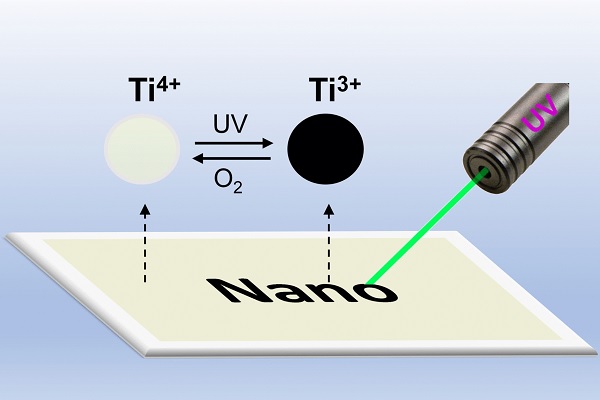 The team of researchers concentrated on sustaining the color change for a longer period of time. They used nitrogen as a dopant, which they obtained from urea, and decorated the crystals with a common non-toxic substance called diethylene glycol. This substance, added to the synthesis as a solvent, also played a crucial role in the color change; the researchers noted that it scavenged excess electron holes and so delayed reoxidation and a return to the transparent state.

When applied to glass or paper, the nanocrystals formed a uniform coating that could be written on using UV light. All that was needed to produce the writing was 30 seconds of illumination with a light source at a wavelength of less than 400 nm. The team emphasized that it was not necessary to use a strong light source; lamps in the power range of LEDs were sufficient to produce a high level of contrast on the material.

The team explored two light-writing methods. First, they produced patterns or printed text by illuminating the paper or glass substrate through a photomask. They also produced freehand writing using a laser pen. Both options gave a high-contrast pattern that was stable for many hours and could either be erased by heating or faded slowly because of oxidation. The team point out that extending the life of the printing is possible by covering the film surface with a protective layer of a non-toxic polymer, reducing its exposure to oxygen.

The main advantage of the system produced by Yin and his team is its reusability. The study demonstrated that up to 50 write–erase cycles could be completed without any notable loss of contrast. This means that the technology could be applied in a number of fields where reusable/rewritable surfaces are required; for example, daily transport tickets, information boards, data storage, or sensor technology. The authors highlight the simple production method, using common, non-toxic starting materials, and the high degree of compatibility with other materials.