Droplet systems such as DNA droplets, which are formed by liquid-liquid phase separation of macromolecules, play an essential role in cellular functions. Now, by combining the technologies of DNA droplets and DNA computing, computational DNA droplets have been developed by scientists at Tokyo Tech, which can recognize specific patterns in tumor biomarker microRNA sequences.

Aqueous droplet formation by liquid-liquid phase separation (or coacervation) in macromolecules is a hot topic in life sciences research. Of these various macromolecules that form droplets, DNA is quite interesting because it is predictable and programmable, which are qualities useful in nanotechnology. Recently, the programmability of DNA was used to construct and regulate DNA droplets formed by coacervation of sequence designed DNAs.

A group of scientists at Tokyo University of Technology (Tokyo Tech) led by Prof. Masahiro Takinoue has developed a computational DNA droplet with the ability to recognize specific combinations of chemically synthesized microRNAs (miRNAs) that act as biomarkers of tumors. Using these miRNAs as molecular input, the droplets can give a DNA logic computing output through physical DNA droplet phase separation. Prof. Takinoue explains the need for such studies, "The applications of DNA droplets have been reported in cell-inspired microcompartments. Even though biological systems regulate their functions by combining biosensing with molecular logical computation, no literature is available on integration of DNA droplet with molecular computing." Their findings were published in Advanced Functional Materials. 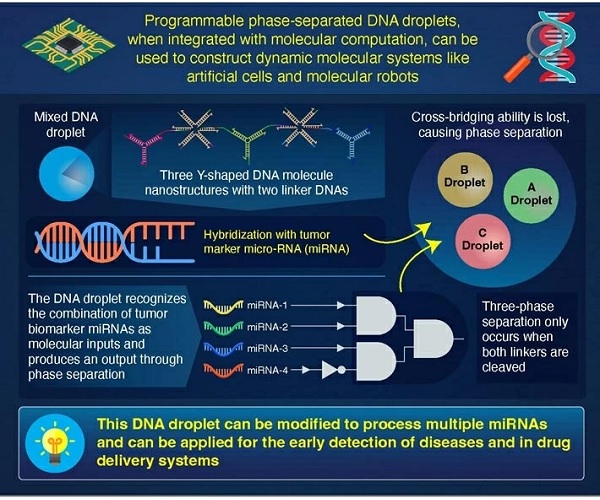 Developing this DNA droplet required a series of experiments. First, they designed three types of Y-shaped DNA nanostructures called Y-motifs A, B, and C with 3 sticky ends to make A, B, and C DNA droplets. Typically, similar droplets band together automatically while to join dissimilar droplets a special "linker" molecule required. So, they used linker molecules to join the A droplet with B and C droplet; these linker molecules were called AB and AC linkers, respectively.

In their first experiment they evaluated the "AND" operation in the AB droplet mixture by introducing 2 input DNAs. In this operation, the presence of input is recorded as 1 while its absence is recorded as 0. The phase separation of AB droplet mixture occurred only at (1,1), meaning when both input DNAs are present, suggesting successful application of AND operation. Following this study, the scientists decided to introduce breast cancer tumor markers, miRNA-1 and miRNA-2, to AC droplet mixture as inputs for the AND operation. The AND operation was successful implying that the computational DNA droplet identified the miRNAs.

This property of ABC droplet enabled the researchers to demonstrate the ability to detect a set of known cancer biomarkers or detect markers of 3 diseases simultaneously. Prof. Takinoue, who is also the corresponding author, sees a huge potential for computational DNA droplets. According to him, "If a DNA droplet can be developed which can integrate and process multiple inputs and outputs, we can use it in early disease detection as well as drug delivery systems. Our current study also acts as a steppingstone for research in developing intelligent artificial cells and molecular robots."

We surely have our fingers crossed!