Moving Furniture in The Micro-World

Have you ever noticed when moving furniture that heavy objects are easier to move if you rotate them at the same time as you push? Many people intuitively do this right. An international research team from Konstanz (Germany), Trieste and Milan (Italy) has now investigated this phenomenon – the reduction in static friction caused by simultaneous rotation – on the microscopic scale.

In their recent study in Physical Review X, the researchers found that the reduction in static friction of a microscopic object on a crystalline surface can be described by moiré patterns, which occur when periodic patterns superimpose. Based on this concept, the researchers predict an unusual state, in which microscopic objects can be set in rotation by applying a minimal amount of torque. In the future, this could enable the construction of micro-machines with ultra-low static friction against rotation.

To set an object in motion, one needs to push it to overcome its static friction with the underlying surface. This holds true even if the touching surfaces are very smooth. Daily experience teaches us that static friction is much smaller when the object is not only pushed, but simultaneously rotated. Even though renowned scholars, such as Leonardo da Vinci, have already studied friction phenomena more than 500 years ago, the relation between static friction forces and torques is still not fully understood. This is quite remarkable, given that rotational friction originates from the same interaction between an object and the underlying surface as the well-explored translational friction.

The complex relationship between static translational and rotational friction becomes even more intriguing on the microscopic scale, where flat contacts involve only a few hundred to a few thousand atoms.

Rotational friction and its interplay with translational friction for such small contacts has remained rather unexplored, because it is technically very challenging to apply well-controlled torques to rotating microscale objects.

Moiré patterns are the key

In their recent study – combining experimental and theoretical approaches – the researchers from Konstanz, Trieste and Milan have overcome this challenge and investigated rotational friction and its interplay with translational friction for microscopic contacts. “For our experiments, we created crystalline clusters made of micron-sized magnetic spheres and brought them into contact with a structured surface with regularly repeating wells,” Dr Xin Cao, one of the lead authors of the study and Humboldt Fellow in the working group of Clemens Bechinger, describes the starting point of the experiments. He continues: “This setting mimics the contact area between two atomically flat surfaces.”

The two-dimensional clusters – with contacts to the surface consisting of 10 to 1000 spherical particles – were then set in rotational motion using a highly controllable rotating magnetic field. The minimum torque required to make the respective cluster rotate corresponds to the static rotational friction, similar to the static translational friction, which characterizes the minimum force required to achieve a translational motion of the cluster.

In their study, the researchers found that the interplay of rotational and translational friction can be understood through the properties of what is known as moiré patterns. These patterns arise when two or more periodic structures superimpose. “Optical moiré patterns can be observed, for example, when a fine-mesh curtain wrinkles and individual layers of the curtain overlap,” explains Dr Andrea Silva, second lead author of the study and Physicist at the International School for Advanced Studies (SISSA) in Trieste. “The resulting patterns are extremely sensitive to minute relative movements and exhibit higher-level geometric structures that are not present in the overlapping structures themselves.”

The advantage of simultaneous rotation

Coming back to the experiments, Andrea Silva describes: “The contact between the particle cluster and the underlying surface in areas where the periodicities in the structure of both objects match can be compared to eggs in an egg carton.” Without applying external forces or torques, this area of structural overlap is at a max, which means that a large number of particles of the cluster are close to the bottom of the wells of the patterned surface, resulting in high static friction.

When a force is applied to the cluster to push it in a particular direction, the area of structural overlap shifts to the edge of the contact area. As a result, it becomes smaller. However, a large number of particles remain “stuck” in the wells of the substrate, so that a comparatively large force is required to overcome the cluster’s resistance against motion and to depin it from the substrate. If, on the other hand, the cluster is twisted with a torque, the area of overlap shrinks symmetrically. “This makes it much easier to push the cluster and set it in motion, since the area of structural overlap has already been significantly reduced by the applied torque,” Xin Cao says, explaining how simultaneous pushing and rotating reduces static friction. 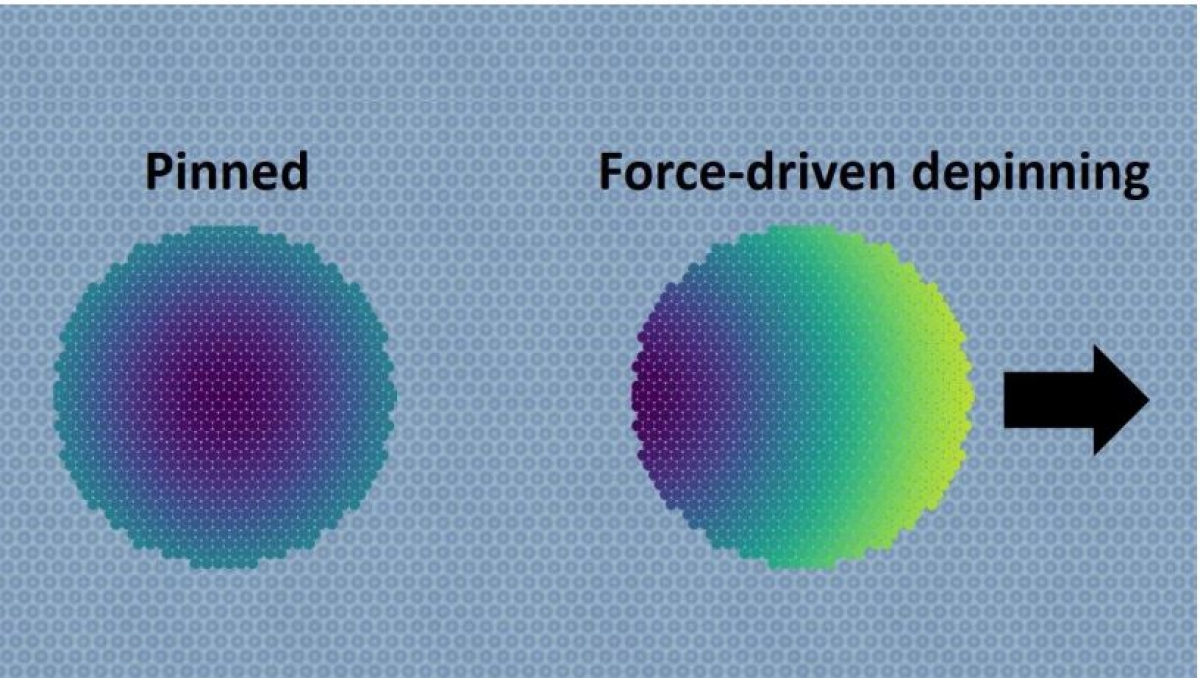 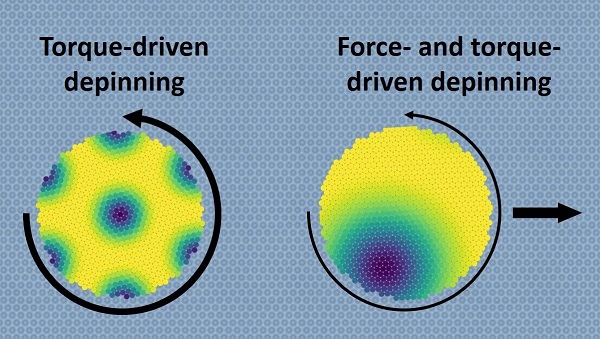 Schematic illustration of the moiré pattern evolution under the influences of external forces and torques for a circularly shaped colloidal cluster interacting with a periodically structured surface. Regions where the particles of the cluster are close to the bottom of the wells of the patterned surface appear as dark-coloured regions in the respective moiré patterns. The width of the arrows represents the amount of force and/or torque required to overcome the static friction between cluster and surface.

Based on the properties of the observed moiré patterns the physicists were not only able to explain why an additional rotation facilitates the translation of microscopic objects, but also to make predictions about the dependence of the static friction against rotations on the cluster size: When the latter exceeds a certain threshold, the static friction against rotations decreases strongly, resulting in a state of ultra-low static friction for very large clusters. “Such a low-friction state can be highly relevant for the fabrication and functioning of small mechanical devices – from the atomic to the micro-scale – bringing us closer to realizing smaller and more efficient machines,” concludes Clemens Bechinger.