Stem cells give rise to all kinds of cells and tissues in our body through a conversion process called “differentiation.” However, guiding stem cell differentiation in the laboratory is a complex and laborious process. Now, researchers from Korea have developed a novel platform that uses metal-organic framework nanoparticle–embedded nanopit arrays to enable highly efficient stem cell differentiation without complex experimental steps. This could open up new possibilities in regenerative stem cell therapy.

Researchers from Korea have developed a novel platform that promotes highly efficient stem cell differentiation outside the body using metal-organic framework nanoparticle – embedded in nanopit arrays. This could open doors to treatment of neurologic disorders such as Alzheimer's and Parkinson’s diseases.

Stem cells are essentially our body’s raw materials – cells that give rise to all other cells and tissues with specialized functions. The conversion into specific cells occurs through a process called “differentiation,” in which stem cells divide to form daughter cells. This lends itself to practical applications in regenerative therapy, where functional healthy cells generated from stem cells can be used to cure injuries and cellular damages in our body. 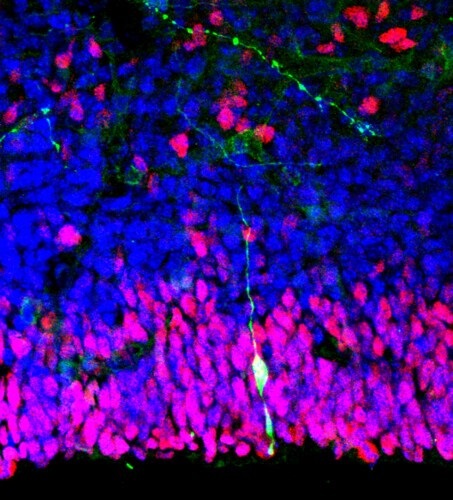 In a new study, researchers from Korea, led by Associate Professor Tae-Hyung Kim of school of integrative engineering at Chung-Ang University, came up with an ingenious solution. They developed a novel platform based on metal-organic frameworks (MOFs), hybrid crystalline porous materials constructed using metal ions and organic ligands (ions/molecules attached to the metal ion). Due to their porous nature, MOFs are excellent for trapping and releasing molecules of interest over a long period of time. This gave the team the idea to use MOFs for storing and releasing biocompatible nanoparticles necessary for stem cell differentiation. This paper was made available online on 20 April 2022 and was published in Volume 8, Issue 16 of the journal Science Advances on 20 April 2022.

In their study, the team chose neural stem cells as a proof of concept and embedded nanoparticles loaded with retinoic acid, an essential component for neuronal differentiation, into the nanocrystalline MOF, nUiO-67. There was, however, one issue to be considered. “Adding nanoparticles directly to the cell cultivation medium may cause safety issues when used for therapeutic purposes and can also cause damage to the nanoparticle structures owing to the presence of redox enzymes and reactive oxygen species (ROS) in the intracellular environment,” explains Dr. Kim.

To get around this problem, the team separated the stem cells from MOFs by creating periodic pattern of nanopit arrays using a technique called “laser interference lithography.”

By optimizing these nanopit arrays such that each array captured a single MOF, the team came up with the platform called “single metal-organic framework (MOF) nanoparticle–embedded nanopit arrays (SMENA)” that could automatically convert stem cells into neurons.

SMENA offered two big advantages over the conventional method for in vitro stem cell differentiation. Firstly, it obviated all the complex experimental steps and typical issues related to cell contamination and batch-to-batch variation. Secondly, and surprisingly, the continuous and stable supply of differentiation factors made for accelerated differentiation, resulting in approximately 40-fold higher expression of neuronal cell markers (indicating the generation of neurons) compared to that for standard protocols.

These findings have excited the team about the future prospects of SMENA. “The platform developed in our study could facilitate and accelerate the use of various stem cell sources for clinical applications and drug screening. The functional cells produce through SMENA can be used to treat various diseases and disorders, including Alzheimer's and Parkinson’s diseases,” speculates Dr. Kim. The paper was also recently featured as a research highlight in Nature Reviews Materials by the Associate Editor, Charlotte Allard.