Identical light particles (photons) are important for many technologies that are based on quantum physics. A team of researchers from Basel and Bochum has now produced identical photons with different quantum dots – an important step towards applications such as tap-proof communications and the quantum internet.

Many technologies that make use of quantum effects are based on exactly equal photons. Producing such photons, however, is extremely difficult. Not only do they need to have precisely the same wavelength (colour), but their shape and polarization also have to match. 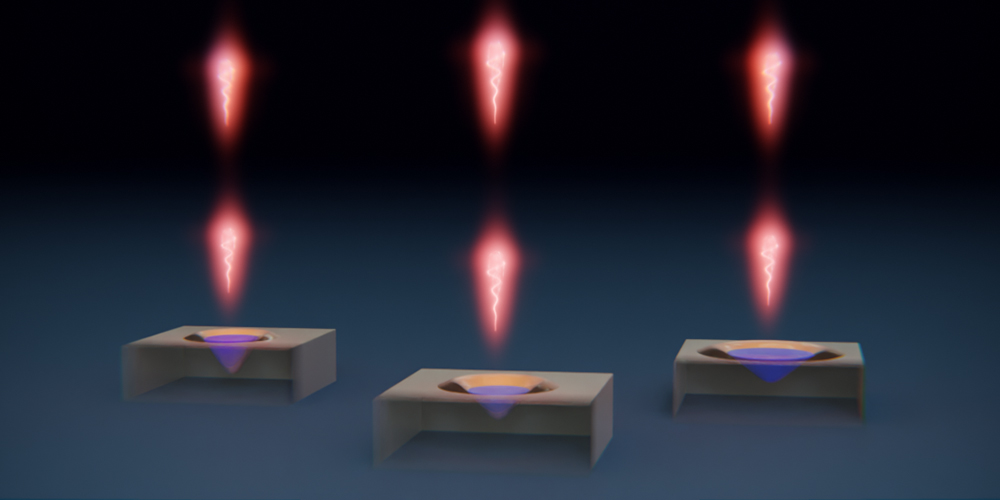 Although the quantum dots of the Basel researchers are different, they emit exactly identical light particles.

In their experiments, the physicists used so-called quantum dots, structures in semiconductors only a few nanometres in size. In the quantum dots, electrons are trapped such that they can only take on very specific energy levels. Light is emitted on making a transition from one level to another. With the help of a laser pulse that triggers such a transition, single photons can thus be created at the push of a button.

“In recent years, other researchers have already created identical photons with different quantum dots”, explains Lian Zhai, a postdoctoral researcher and first author of the study that was recently published in Nature Nanotechnology. “To do so, however, from a huge number of photons they had to pick and choose those that were most similar using optical filters.” In that way only very few usable photons remained.

Warburton and his collaborators chose a different, more ambitious approach. First, the specialists in Bochum produced extremely pure gallium arsenide from which the quantum dots were made. The natural variations between different quantum dots could thus be kept to a minimum. The physicists in Basel then used electrodes to expose two quantum dots to precisely tuned electric fields. Those fields modified the energy levels of the quantum dots, and they were adjusted in such a way that the photons emitted by the quantum dots had precisely the same wavelength.

To demonstrate that the photons were actually indistinguishable, the researchers sent them onto a half-silvered mirror. They observed that, almost every time, the light particles either passed through the mirror as a pair or else were reflected as a pair. From that observation they could conclude that the photons were 93 percent identical. In other words, the photons formed twins even though they were “born” completely independently of one another.

Moreover, the researchers were able to realize an important building block of quantum computers, a so-called controlled NOT gate (or CNOT gate). Such gates can be used to implement quantum algorithms that can solve certain problems much faster than classical computers.

“Right now our yield of identical photons is still around one percent”, PhD student Gian Nguyen concedes. Together with his colleague Clemens Spindler he was involved in running the experiment. “We already have a rather good idea, however, how to increase that yield in the future.” That would make the twin-photon method ready for potential applications in different quantum technologies.