Experts from the Center for Research and Development in Paint Technology (CIDEPINT) of the Faculty of Engineering of the UNLP and scientists from the Autonomous University of San Luis Potosí, in Mexico, are developing an acrylic paint capable of resisting the subjugation in the open air. of the environmental conditions of La Plata for a period of four years. For this to happen, the experts used nanoparticles of zinc oxide in the paints and with the additive it was possible to extend the useful life of the paint, which is an innovative discovery.

The tests were carried out on a series of panels, similar to cement blocks, covered with a water-based paint and with the nanoadditive zinc oxide (ZnO). The compounds have been exposed since 2017 on the terrace of the Paint Technology Research and Development Center (CIDEPINT), at the mercy of the proliferation of fungi, bacteria and lichens, among other microorganisms. The tests allowed to reach promising findings.

The research titled “Long-term field study of a water-based paint with a nanoadditive for biodeterioration control”was recently published in the magazine Journal of Building Engineering. The doctor Cecilia Deyaa member of the project, pointed out that It is not usual to carry out such extensive trials over time. and stressed that the importance of this type of study is that it allows analyzing the degradation of paint under natural environmental conditions, taking into account the variation in temperature and phenomena such as rain, wind, sun and humidity, among others.

The painting was made by researchers from CIDEPINT, an institution that depends on the National University of La Plata (UNLP), the Center for Scientific Research of the Province of Buenos Aires (CICBA) and CONICET; while the zinc oxide particles were provided by scientists from the Autonomous University of San Luis Potosí.

“The paint had a nano additive, which were zinc oxide particles in very low concentration, because the idea is to try to test new biocides. Biocides are additives that are added to a paint formulation to prevent settling and development. of biofilms that degrade paints”Deya explained.

For her part, Dr. Natalia Bellottiresponsible for the Antimicrobial Coatings area of ​​CIDEPINT and co-author of the work, mentioned that Traditionally, very aggressive biocides were used, which are currently prohibited due to their toxicity.. On the other hand, commercial biocides used in the paint industry, generally organic, tend to decrease their efficiency with time of exposure to the film.

That is why nanoparticles are studied that have the particularity of remaining retained in the films and that maintain their antimicrobial efficiency over time. For this reason, new paint designs are formulated with the aim of ensuring that their useful life is long-lasting, like before, but with environmentally friendly biocides. In this way, CIDEPINT researchers verified that the zinc oxide additive extended the useful life of the paint, maintaining its integrity. In contrast, test panels that did not have the nanoparticles deteriorated in less time.

Another advantage of these biocides, pointed out by the scientists, is that they demonstrated a photoactive activity. “We saw that they not only have an antimicrobial action, but also, when ultraviolet (UV) light strikes, they have the ability to release reactive oxygen compounds and this acts positively on organic matter. It is a quality within what is known as films self-cleaning, and it’s something extra compared to the silver nanoparticles that are also used today”.

How long should a paint last?

Paints can be affected by microorganisms that are naturally in the environment and that, finding a surface to adhere to, begin to develop and form biofilms. These microorganisms release compounds that are degrading from a chemical point of view and, at the same time, in the case of fungi, they penetrate the film, breaking it due to their invasive growth. 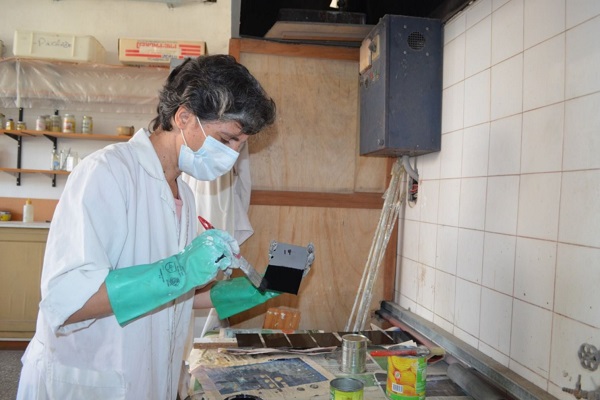 According to the CIDEPINT researchers, it is estimated that a painting should last 10 years. However, they indicated that there are different views. “For some people, the paint stops working when its color changes or stains appear, for others it happens when it starts to come off. It depends on each one’s criteria,” said Deyá. Meanwhile, Bellotti added that when it is observed that the biofilm has an area coverage of around 30% in a painting, its useful life is already compromised from the point of view of biodeterioration.

Read the original article on California18.

Graphene-enhanced Wallpaper for Heating Homes Is Being Trialed in Wales

New Route to Build Materials Out of Tiny Particles