Polymers with different metal complexes in their side chains are thought to be promising high-performance materials with a wide variety of applications. However, conventional fabrication methods are not suitable for constructing such polymers because controlling their resulting metal composition is complicated. Recently, scientists from Japan have developed a method to overcome this limitation and successfully produce multimetallic copolymers, which can be used as building blocks to create future hybrid materials.

From plastics to clothes to DNA, polymers are everywhere. Polymers are highly versatile materials that are made of long chains of repeating units called monomers. Polymers containing metal complexes on their side chains have enormous potential as hybrid materials in a variety of fields. This potential only increases with the inclusion of multiple metal species into the polymers. But conventional methods of fabricating polymers with metal complexes are not appropriate for the construction of multimetallic polymers, because controlling the composition of metal species in the resulting polymer is complex. 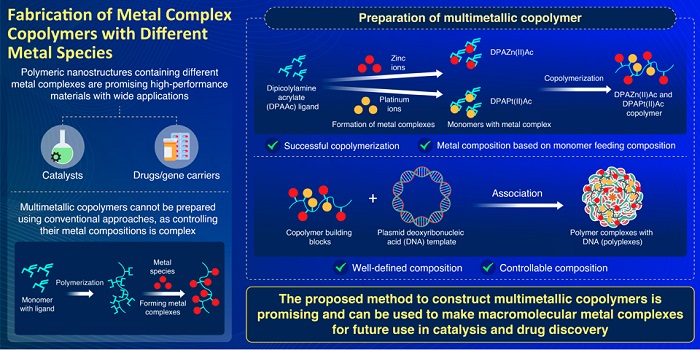 The new method can be used to construct copolymers comprising different metal species, which have potential uses in catalysis and drug discovery.

Recently, a research team, led by Assistant Professor Shigehito Osawa and Professor Hidenori Otsuka from Tokyo University of Science, has proposed a new method of polymerization that can overcome this limitation. Dr. Osawa explains, "The usual method of preparing such complexes is to design a polymer with ligands (molecular 'backbones' that join together other chemical species) and then add the metal species to form complexes on it. But each metal has a different binding affinity to the ligand, which makes it complicated to control the resulting structure. By considering polymerizable monomers with complexes of different metal species, we can effectively control the composition of the resulting copolymer." The study was made available online on April 1, 2022, and published in Volume 58, Issue 34 of Chemical Communications on April 30, 2022.

When the monomers that make up a polymer are polymers themselves, the polymer is called a copolymer. For their study, the scientists designed a dipicolylamine acrylate (DPAAc) monomer. DPA was chosen because it is an excellent metal ligand and has been used in various biochemical applications. They then polymerized DPAAc with zinc (Zn) and platinum (Pt) to form two polymer chains with metal complexes―DPAZn(II)Ac and DPAPt(II)Ac. They then copolymerized the two monomers. They found that they could not only successfully create a copolymer, but that they could also control its metal composition by varying the feeding composition of the monomers.

Then they applied this copolymer as a building block to fabricate nanoparticles using plasmid deoxyribonucleic acid (DNA) as a template. Plasmid DNA was chosen as a template because the two constituent monomers are known to bind to it. The formation of the resulting nanoparticle polymer complexes with DNA (polyplexes) was confirmed using high-resolution scanning tunneling electron microscopy and energy-dispersive X-ray spectroscopy.

The polyplexes formed in the study are DNA-binding molecules, which indicates that they could be used to develop anti-cancer drugs and gene carriers. The proposed fabrication method will also lead to advances in catalysis that move away from precious metals like platinum. "These multimetallic copolymers can serve as building blocks for future macromolecular metal complexes of many varieties," concludes Dr. Osawa.

The findings of this study are sure to have far reaching consequences in the field of polymer chemistry.