How molecules bind to a surface is of central importance in chemical reactions, making the possibility of studying binding configurations in isolated nanosystems of great interest. A Freiburg research team led by Dr. Lukas Bruder and Prof. Dr. Frank Stienkemeier has now succeeded in studying the binding configurations and mobility of organic molecules on ultracold noble gas particles.

In doing so, they obtained information on the different binding configurations between the molecules and the nanoparticle surface and how these configurations develop after exposure to light. To this end, phthalocyanine molecules were studied as important building blocks for optoelectronic and organic photovoltaic applications. The results were published in the journal Nature Communications. 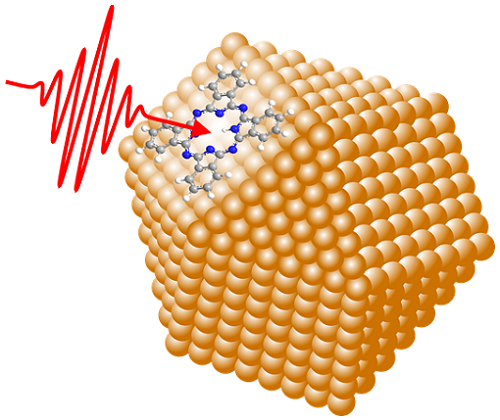 Laser excitation of a phthalocyanine molecule on the surface of a noble gas cluster consisting of a few hundred neon atoms. The system has a size of less than ten nanometers.

For the experiments, single molecules were deposited on isolated noble gas particles in ultrahigh vacuum and subsequently studied by coherent two-dimensional spectroscopy. This technique, applied to isolated nanosystems, allows the study of molecular properties with particularly high time and energy resolution. The time resolution here is only a fraction of a millionth of a millionth of a second, making it possible to follow binding processes in real time.

“What is particularly surprising is the large number of possible binding configurations that we were able to estimate,” says Ulrich Bangert, who was largely responsible for the laboratory work. This observation, which was made possible by determining the homogeneous line profile in such a system for the first time, offers new incentives for theoretical modeling of the nanoparticles.

“It will be interesting to see how our research method can be transferred to other nanoparticles, such as catalytic nanoparticles,” says Lukas Bruder, looking to the future. “However, the high resolution achieved also shows in general a promising perspective for investigating photochemical reactions in nanosystems,” adds Frank Stienkemeier.

Read the original article on Albert Ludwig University of Freiburg.