Researchers from Nanjing University and Beihang University in China and the Max Planck Institute for the Structure and Dynamics of Matter have produced a new class of exciton with hybrid dimensionality by engineering the properties of layered silicon diphosphide (SiP2). Their work has been published in Nature Materials.

Using SiP2, researchers in China fabricated a new kind of material whose 2D layers are bound by van der Waals forces and feature strong internal covalent interactions. This produces peculiar one-dimensional phosphorus chains along which electronic states can localize. The team then managed to engineer a new kind of exciton with hybrid dimensionality in this layered material, meaning that the electron has a 1D character and the hole displaying 2D characteristics. This is the first time such a phenomenon has been observed. Theoreticians at the MPSD confirmed the findings with advanced simulations.

By exposing the material to laser light, the experimentalists were able to create and subsequently probe these exitonic states, which appear as peaks in the measured spectra. In particular, the emergence of a peculiar side peak to the main excitonic peak in the spectra shows a distinct signature of the hybrid dimensionality excitons: Due to their strong dependence on the material’s internal structure, the newly-created excitons are expected to interact strongly with other material excitations, such as lattice vibrations that alter the phosphorous chains in SiP2. 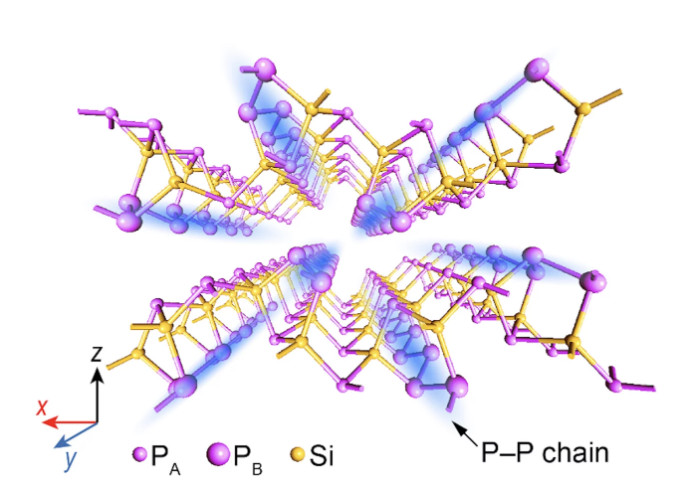 Schematic layered structure of SiP2. The blue shading highlights the PB–PB chains formed by the PB atoms along the y direction of the crystal lattice, which play a critical role in generating quasi-1D electronic and excitonic states.

The theory group at the MPSD subsequently confirmed these findings through extensive analysis, using state-of-the-art methods to investigate the excitonic particles. Their simulations show that the particle consists of a positively charged hole with 2D character and a negatively charged electron that is localized along the 1-dimensional phosphorous chains, giving rise to excitons with mixed dimensionality.

The theoreticians demonstrated that such an exciton interacts strongly with lattice vibrations, which generates the experimentally measured side peak feature. Such a feature has so far only been measured in low-dimensional materials such as graphene nanotubes or transition metal dichalcogenide monolayers, but not in a bulk material such as SiP2.

This collaboration has shown the existence of exciton-phonon sidebands in a 3D bulk crystal as well as excitonic states with hybrid dimensionality. These findings represent important progress in the search for new ways to control and investigate the interactions between quasi-particles such as excitons, phonons and others in solid materials.

„Our approach provides an intriguing platform to study and engineer new states of matter such as trions - two electrons and one hole or vice versa - and more complex particles with hybrid dimensionality,” says co-author Peizhe Tang, Professor at Beihang University and visiting scientist at the MPSD. Fellow co-author Lukas Windgätter, a doctoral student in the Institute’s Theory group, adds: “To me it is intriguing how one can control the interactions of particles through engineering solids. Especially being able to create composite particles with hybrid dimensionality opens up pathways to investigate new physics.”