Researchers around Toma Susi have succeeded in showing how the influence of atoms on the stability of a nanomaterial can be indirectly determined by heating.

The migration of carbon atoms on the surface of the nanomaterial graphene was recently measured for the first time. Although the atoms move too swiftly to be directly observed with an electron microscope, their effect on the stability of the material can now be determined indirectly while the material is heated on a microscopic hot plate. The study by researchers at the Faculty of Physics of the University of Vienna was published in the journal Carbon. 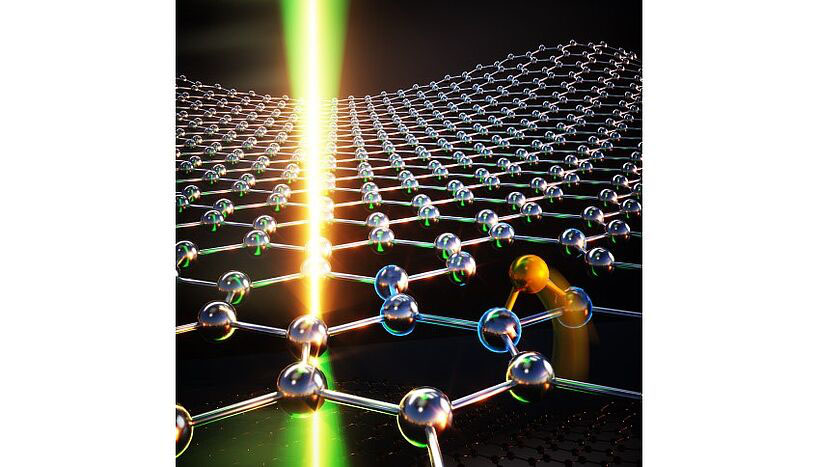 A carbon atom (highlighted in orange) migrating on the surface of graphene at elevated temperature towards a vacancy, racing against a scanning electron beam (green-yellow glow) nearing the same position.

Carbon is an element essential to all known life and exists in nature primarily as graphite or diamond. Over the past decades, material scientists have created many novel forms of carbon that include fullerenes, carbon nanotubes, and graphene. Graphene in particular has been the subject of intensive research, not only because of its superlative properties but also because it is particularly well-suited for experiments and modeling. However, it has not been possible to measure some fundamental processes, including the motion of carbon atoms on its surface. This random migration is the atomic origin of the phenomenon of diffusion.

Diffusion (from Latin diffundere: "to spread out", "to scatter") refers to the natural motion of particles such as atoms or molecules in gases, liquids or solids. In the atmosphere and the oceans, this phenomenon ensures an even distribution of oxygen and salt. In the technical industries, it is of central importance for steel production, lithium-ion batteries, and fuel cells, to name just a few examples. In materials science, diffusion at the surface of solids explains how certain catalytic reactions proceed and many crystalline materials including graphene are grown.

Surface diffusion rates generally depend on temperature: the warmer, the faster the atoms migrate. In principle, by measuring this speed at different temperatures, we can determine the energy barrier that describes how easy it is for the atoms to hope from one site on the surface to the next. However, this is impossible by direct imaging if they do not stay put for long enough, which is the case for carbon atoms on graphene. Thus, until now, our understanding has relied on computer simulations. The new study overcomes this difficulty by indirectly measuring their effect while heating the material on a microscopic hot plate inside an electron microscope.

By visualizing the atomic structure of graphene with electrons while occasionally kicking out atoms, the researchers could determine how fast carbon atoms on the surface must be moving to explain the filling of the resulting holes at elevated temperatures. By combining electron microscopy, computer simulations, and an understanding of the interplay of the imaging process with the diffusion, an estimate for the energy barrier could be measured. "After careful analysis, we pinpointed the value to 0.33 electronvolts, somewhat lower than expected," lead author Andreas Postl states.

The study is also an example of serendipity in research, as the team’s original goal was to measure the temperature dependence of this irradiation damage. "Honestly, this was not what we initially set out to study, but such discoveries in science often happen by persistently pursuing small but unexpected details," senior author Toma Susi concludes.