Boron nitride nanotubes used to be hard to process, according to Rice University researchers. Not anymore.

A Rice team led by professors Matteo Pasquali and Angel Martí has simplified handling of the highly valuable nanotubes to make them more suitable for large-scale applications, including aerospace, electronics and energy-efficient materials. 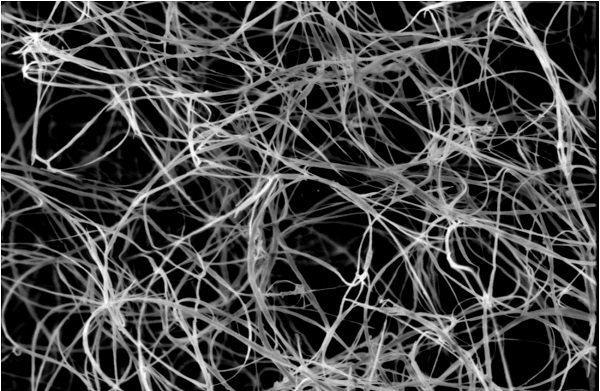 A tangle of unprocessed boron nitride nanotubes seen through a scanning electron microscope. Rice University scientists introduced a method to combine them into fibers using the custom wet-spinning process they developed to make carbon nanotube fibers.

The researchers reported in Nature Communications that boron nitride nanotubes, aka BNNTs, assemble themselves into liquid crystals under the right conditions, primarily concentrations above 170 parts per million by weight in chlorosulfonic acid.

These liquid crystals consist of aligned BNNTs that are far easier to process than the tangled nanotubes that usually form in solution. The lab proceeded to form fibers and films from the liquid crystalline solutions.

“BNNT fibers are attractive for the manufacture of a variety of products, with applications that range from wearables to aerospace vehicles,” said Martí, whose lab designed solutions and helped characterize the fibers produced in Pasquali’s lab.

A robust fiber of boron nitride nanotubes as seen under a scanning electron microscope. The heat-tolerant fibers developed at Rice University could be useful for aerospace and electronics applications and as energy-efficient materials.

To form liquid crystals, the researchers needed to be sure their nanotubes were free of contaminants. Unfortunately, those contaminants were mostly bits of boron nitride that threatened to gum up the works.

“Early BNNT samples contained lots of non-nanotube boron nitride structures,” said graduate student and lead author Cedric Ginestra. “They were either chemically bound to the BNNTs or just physically adhered in a way that prevented BNNTs from dispersing in acid and aligning at higher concentrations.

“It is difficult to separate these boron nitride allotropes from BNNTs, and hard to even measure their concentration,” he said. “All the different types of boron nitride appear identical by basically every quantitative technique that we’ve tried so far.” 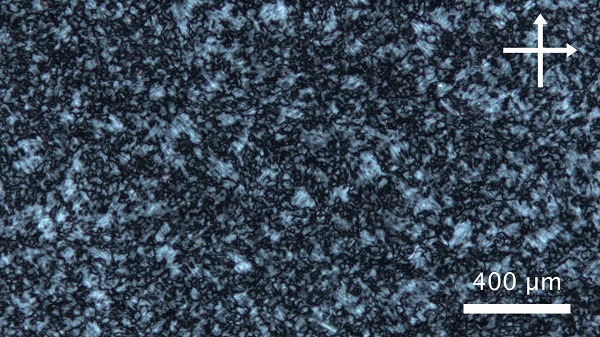 Liquid crystals of boron nitride nanotubes are easy to extrude into fibers through a process developed at Rice University. The fibers could be useful for aerospace and electronics applications and as energy-efficient materials.

Working with their supplier to optimize their BNNT purification process for the formation of liquid crystalline solutions and using a purification process developed in the Pasquali lab helped them obtain better batches of BNNTs, he said. Once suitable material was produced, the Pasquali group was primed to quickly adapt its wet-spinning techniques for carbon nanotube fibers to make the first boron nitride threads with the process.

“There are reports of others taking solid puffs of BNNTs and stretching and twisting them to make a yarn, but that’s very different from our process,” Ginestra said. “Our goal was to make a very highly aligned fiber because the properties are better along the length of the nanotubes.”

Liquid crystals are the ideal precursor for fibers because the nanotubes within are already aligned, he said. BNNT alignment in the liquid crystals was identified microscopically by their birefringence, a phenomenon by which crystals split light, prism-like, even if they appear to be clear.

The films also demonstrated how BNNT solution processing can adopt methods developed for carbon nanotubes, Ginestra said. Such transparent thin films could be useful in next-generation electronics. “The BNNT film and fiber properties will improve as the material and our understanding of the liquid crystalline solution improves,” he said.

Martí noted BNNT films would be useful as filters for ultraviolet light, antifouling coatings and for corrosion protection.