Researchers have discovered a new method to improve the stability of diamane synthesized by-high pressure method.

A research team led by Prof. WANG Xianlong from the Hefei Institutes of Physical Science of the Chinese Academy of Sciences (CAS) has discovered a new method to improve the stability of diamane synthesized by-high pressure method. By introducing boron (B) and nitrogen (N) dopants into diamane, they found that the diamane's structure and electronic properties could be regulated. Related results were published in Physical Review B.

Diamane is a two-dimensional (2D) single-layer diamond obtained by compressing bi-layer graphene to form interlayer sp3 bonds. With the characteristics of both graphene and diamond, it is expected to be a new 2D carbon material alongside graphene. However, diamane synthesized by high-pressure method is converted back to graphene after releasing pressure, and it cannot be maintained under ambient conditions.

In this study, the researchers investigated the structural and electronic properties of different doped forms of B and N atoms in cubic and hexagonal diamane based on the first-principles methods.

They found that the doping configuration reduced the formation energy of diamane, promoted the synthesis of diamane and enhanced the stability of diamane at ambient condition.

They proposed an easiest mechanism to synthesize diamane experimentally by compressing bi-layer graphene with one layer doped with B atom and the other doped with N atom.

Diamane doped with N atoms was easy to obtain experimentally because the formation energy of diamane was not sensitive to the distribution of N dopant. In addition, depending on the concentrations and distributions of B and N atoms, doped diamane had variable electronic structures (semiconductor, metal, superconductivity ~ 4 K), which could be applied to the field of 2D electronic devices.

This work offers a new scheme to synthesize more stable and functional diamane. 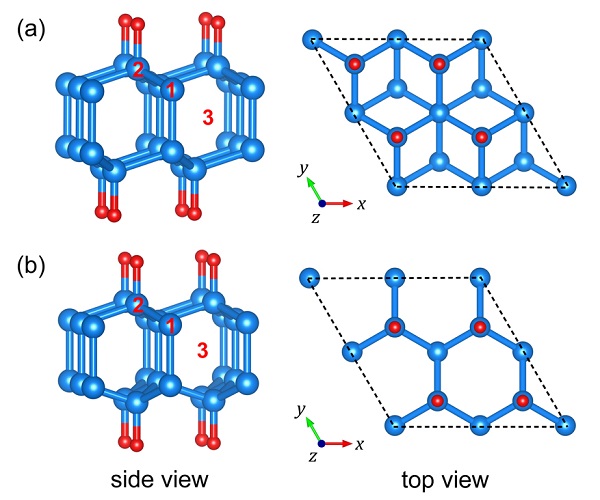 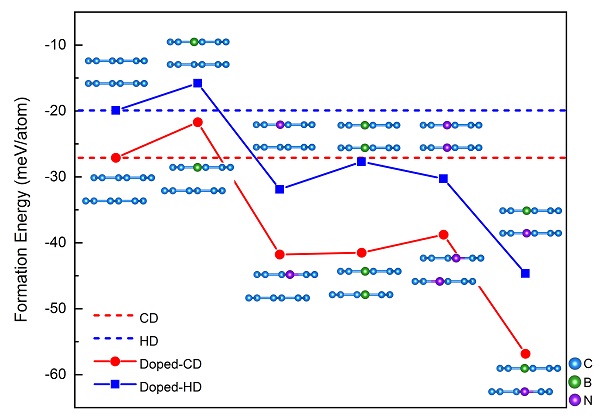 Formation energies of diamane with different doping methods at the concentration of 6.25 mol%. 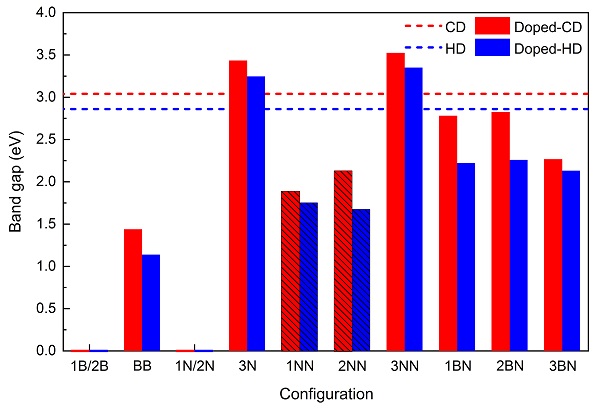 The bandgaps of different doping configurations. Bars with simple color represent the direct bandgap, and bars with slanted lines on the surface represent the indirect bandgap. The dashed red and blue lines show the bandgap of pristine cubic and hexagonal diamane, respectively.