A 2.6nm-long single molecule wire has quasi-metallic properties and shows an unusual increase of conductance as the wire length increases; its excellent conductivity holds great promise for the field of molecular electronics.

As our devices get smaller and smaller, the use of molecules as the main components in electronic circuitry is becoming ever more critical. Over the past 10 years, researchers have been trying to use single molecules as conducting wires because of their small scale, distinct electronic characteristics, and high tunability. But in most molecular wires, as the length of the wire increases, the efficiency by which electrons are transmitted across the wire decreases exponentially. This limitation has made it especially challenging to build a long molecular wire—one that is much longer than a nanometer—that actually conducts electricity well.

Columbia researchers announced today that they have built a nanowire that is 2.6 nanometers long, shows an unusual increase in conductance as the wire length increases, and has quasi-metallic properties. Its excellent conductivity holds great promise for the field of molecular electronics, enabling electronic devices to become even tinier. The study is published today in Nature Chemistry.

The team of researchers from Columbia Engineering and Columbia’s department of chemistry, together with theorists from Germany and synthetic chemists in China, explored molecular wire designs that would support unpaired electrons on either end, as such wires would form one-dimensional analogues to topological insulators (TI) that are highly conducting through their edges but insulating in the center.

While the simplest 1D TI is made of just carbon atoms where the terminal carbons support the radical states--unpaired electrons, these molecules are generally very unstable. Carbon does not like to have unpaired electrons. Replacing the terminal carbons, where the radicals are, with nitrogen increases the molecules’ stability. “This makes 1D TIs made with carbon chains but terminated with nitrogen much more stable and we can work with these at room temperature under ambient conditions,” said the team’s co-leader Latha Venkataraman, Lawrence Gussman Professor of Applied Physics and professor of chemistry. 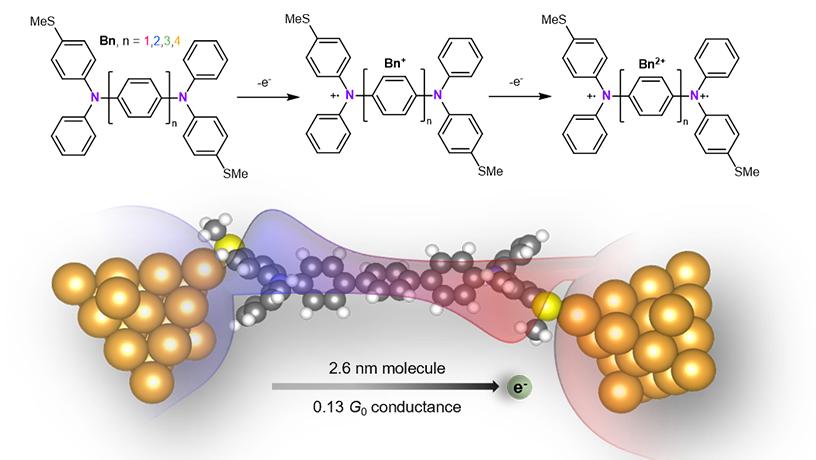 A brief abstract figure of this work. The geometry of the highest conducting trimer (n=3) molecule in the molecular junction. Red and blue regions are artistic depictions on the coupling between the two edge states.

Through a combination of chemical design and experiments, the group created a series of one-dimensional TIs and successfully broke the exponential-decay rule, a formula for the process of a quantity decreasing at a rate proportional to its current value. Using the two radical-edge states, the researchers generated a highly conducting pathway through the molecules and achieved a “reversed conductance decay,” i.e. a system that shows an increasing conductance with increasing wire length.

“What’s really exciting is that our wire had a conductance at the same scale as that of a gold metal-metal point contacts, suggesting that the molecule itself shows quasi-metallic properties,” Venkataraman said. “This work demonstrates that organic molecules can behave like metals at the single-molecule level in contrast to what had been done in the past where they were primarily weakly conducting.“

The researchers designed and synthesized a bis(triarylamines) molecular series, which exhibited properties of a one-dimensional TI by chemical oxidation. They made conductance measurements of single-molecule junctions where molecules were connected to both the source and drain electrodes. Through the measurements, the team showed that the longer molecules had a higher conductance, which worked until the wire was longer than 2.5 nanometers, the diameter of a strand of human DNA.

Laying the groundwork for more technological advancements in molecular electronics

“The Venkataraman lab is always seeking to understand the interplay of physics, chemistry, and engineering of single-molecule electronic devices,” added Liang Li, a PhD student in the lab, and a co-first author of the paper. “So creating these particular wires will lay the groundwork for major scientific advances in understanding transport through these novel systems. We’re very excited about our findings because they shed light not only on fundamental physics, but also on potential applications in the future.”

The group is currently developing new designs to build molecular wires that are even longer and still highly conductive.