Rice University scientists who “flash” materials to synthesize substances like graphene have turned their attention to boron nitride, highly valued for its thermal and chemical stability.

The process by the Rice lab of chemist James Tour exposes a precursor to rapid heating and cooling to produce two-dimensional materials, in this case pure boron nitride and boron carbon nitride. Both have until now been hard to create in bulk, and nearly impossible to produce in easily soluble form.

The lab’s report in Advanced Materials details how flash Joule heating, a technique introduced by the Tour lab in 2020, can be tuned to prepare purified, microscopic flakes of boron nitride with varying degrees of carbon.

Experiments with the material showed boron nitride flakes can be used as part of a powerful anticorrosive coating. 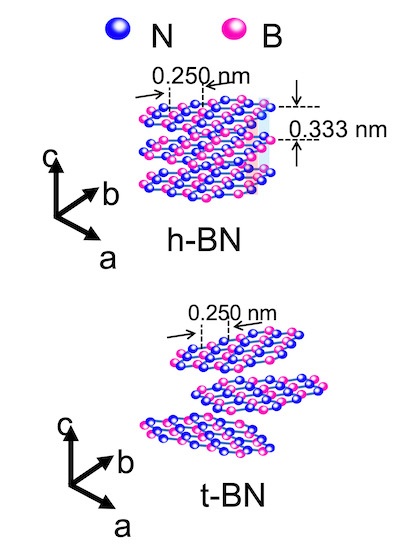 An illustration compares flakes of hexagonal boron nitride, top, and turbostratic boron nitride, bottom, the latter synthesized through the flash Joule heating process developed at Rice. Two-dimensional materials are turbostratic when interactions between their layers are weak, making them easier to separate and solubilize.

“Boron nitride is a highly sought 2D material,” Tour said. “To be able to make it in bulk, and now with mixed amounts of carbon, makes it even more versatile.”

At the nanoscale, boron nitride comes in several forms, including a hexagonal configuration that looks like graphene but with alternating boron and nitrogen atoms instead of carbon. Boron nitride is soft, so it’s often used as a lubricant and as an additive to cosmetics, and is also found in ceramics and metal compounds to improve their ability to handle high heat.

Rice chemical engineer Michael Wong recently reported that boron nitride is an effective catalyst in helping to destroy PFAS, a dangerous “forever chemical” found in the environment and in humans.

Flash Joule heating involves stuffing source materials between two electrodes in a tube and sending a quick jolt of electricity through them. For graphene, the materials can be just about anything containing carbon, food waste and used plastic car parts being just two examples. The process has also successfully isolated rare earth elements from coal fly ash and other feedstocks.

In experiments led by Rice graduate student Weiyin Chen, the lab fed ammonia borane (BH3NH3) into the flash chamber with varying amounts of carbon black, depending on the desired product. The sample was then flashed twice, first with 200 volts to degas the sample of extraneous elements and again with 150 volts to complete the process, with a total flashing time of less than a second. 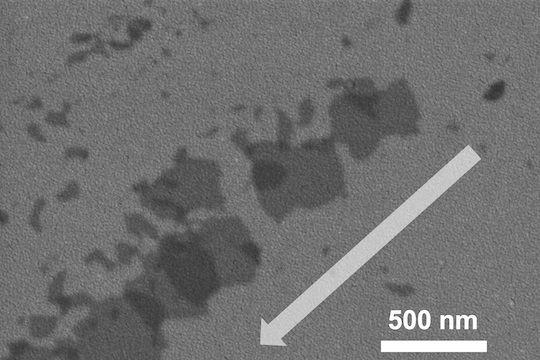 Particles of mechanically sheared flash boron nitride, as seen through a scanning electron microscope. The arrow shows the direction of shear force applied to the material. The flash Joule heating process developed at Rice creates turbostratic materials with weak interactions between layers, making them easier to separate.

Microscope images showed the flakes are turbostratic — that is, misaligned like badly stacked plates — with weakened interactions between them. That makes the flakes easy to separate.

They’re also easily soluble, which led to the anticorrosion experiments. The lab mixed flash boron nitride with polyvinyl alcohol (PVA), painted the compound on copper film and exposed the surface to electrochemical oxidation in a bath of sulfuric acid.

The flashed compound proved more than 92% better at protecting the copper than PVA alone or a similar compound with commercial hexagonal boron nitride. Microscopic images showed the compound created “tortuous diffusion pathways for corrosive electrolytes,” to reach the copper, and also prevented metal ions from migrating.

Chen said the conductivity of the precursor can be adjusted not only by adding carbon but also with iron or tungsten.

He said the lab sees potential for flashing additional materials. “Precursors that have been used in other methods, such as hydrothermal and chemical vapor deposition, can be tried in our flash method to see if we can prepare more products with metastable features,” Chen said. “We’ve demonstrated flashing metastable phase metal carbides and transition metal dichalcogenides, and this part is worth more research.”