NUS scientists have demonstrated the non-invasive imaging of both the organic layers and underlying inorganic lattice of two-dimensional (2D) hybrid perovskites at the sub-angstrom level.

The past few years have witnessed a surge of research interest worldwide and rapid growth in the field of 2D Ruddlesden–Popper halide perovskites (RPPs). 2D RPPs are a type of perovskite crystal with novel light-matter interaction and significantly enhanced photo- and chemical stability. They have insulating organic layers sandwiched between conducting inorganic lead-halide frameworks. However, the insulating nature and softness of the organic layers and the “buried” inorganic framework make the determination of the spatial atomic arrangement and understanding of related effects in 2D RPPs a challenge.

Microscopic knowledge of the atomic arrangements in 2D RPPs is still lacking: addressing this aspect is critical not only for fundamental understanding and control of charge, exciton dynamics and other quantum phenomena, but also for their technological applications in photovoltaic and optoelectronic devices.

A NUS research team led by Associate Professor Jiong LU, in collaboration with Professor Kian Ping LOH’s research group, both from the Department of Chemistry at the National University of Singapore has developed a method for non-invasive imaging of both the top organic layers and their underlying inorganic lattice in 2D RPP at the sub-angstrom scale. The researchers used a combination of scanning tunnelling microscopy (STM) and imaging techniques (Figure (A)).

The STM results provided an atomic reconstruction of the inorganic lead-halide lattice (Figure (B)), while the tip-functionalised ncAFM imaging enabled a visualisation of the top organic layers and its arrangement with respect to the undelaying inorganic lattice at sub-angstrom resolution (Figure (C)). The reconstruction of the on-surface organic layers, presented by a well-ordered array containing pairs of butylammonium cations (Figure (D)), was found to be intimately interlocked with the deformation of the inorganic lattice through hydrogen bonding interactions. This work is jointly undertaken with Prof Pavel JELÍNEK from the Institute of Physics, Czech Academy of Sciences (FZU).

Using the Kelvin Probe Force Microscopy (KPFM) technique, the team also conducted the atomic-scale imaging of the electrostatic potential variation across the pairs of butylammonium cations. Interestingly, this revealed alternating quasi-one-dimensional (1D) electron and hole channels at neighbouring interdomain boundaries. These could potentially allow for long-distance exciton diffusion to enhance the performance of perovskite-based photovoltaic and optoelectronic devices.

Prof Lu said, “Our findings not only bring seminal nanoscale insights on the ground state structure of both organic and inorganic motifs in RPPs, but also shed new light on the mechanism of the efficient separation of photoexcited electron–hole pairs and exciton transport in them.” 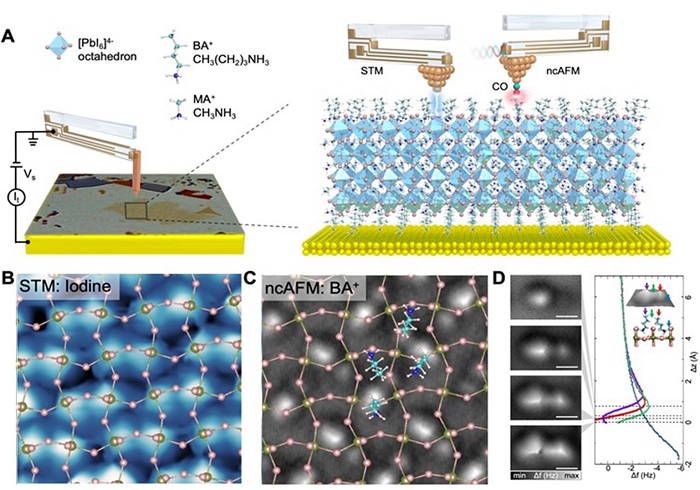