Cancers in humans have all sorts of ways to survive and thrive: Cells and tumors alike engage in devious means to deflect, deceive, and evade detection by our bodies’ immune systems.

Take how they fend off anti-cancer vaccines, for example. Cancer cells in the body, whether singularly or consolidated, essentially cloak themselves through chemical secretions to remain camouflaged to agents in the vaccines that otherwise would trigger an all-out attack from the body’s immune system. The fact that the body’s immune system largely can’t “see” cancer is a major reason why cancer treatments resort to indiscriminate warfare that kills healthy and cancerous cells alike.

Pharmaceutical scientists at the University of Iowa may have discovered a new strategy to overcome cancer’s ingenious defenses. In a new study, the researchers found that charged nanoparticles combined with a vaccine were effective in eliminating tumors or extending life span in cancerous mice.

The new approach is attractive, the researchers contend, because the nanoparticle could be mass manufactured, stored at room temperature, and administered by general physicians to treat a variety of cancers.

“This could be an off-the-shelf, stable formulation that could be available as a powder,” says Ali Salem, the study’s corresponding author and the Lyle and Sharon Bighley Endowed Chair and Professor in Pharmaceutical Sciences in the UI College of Pharmacy. 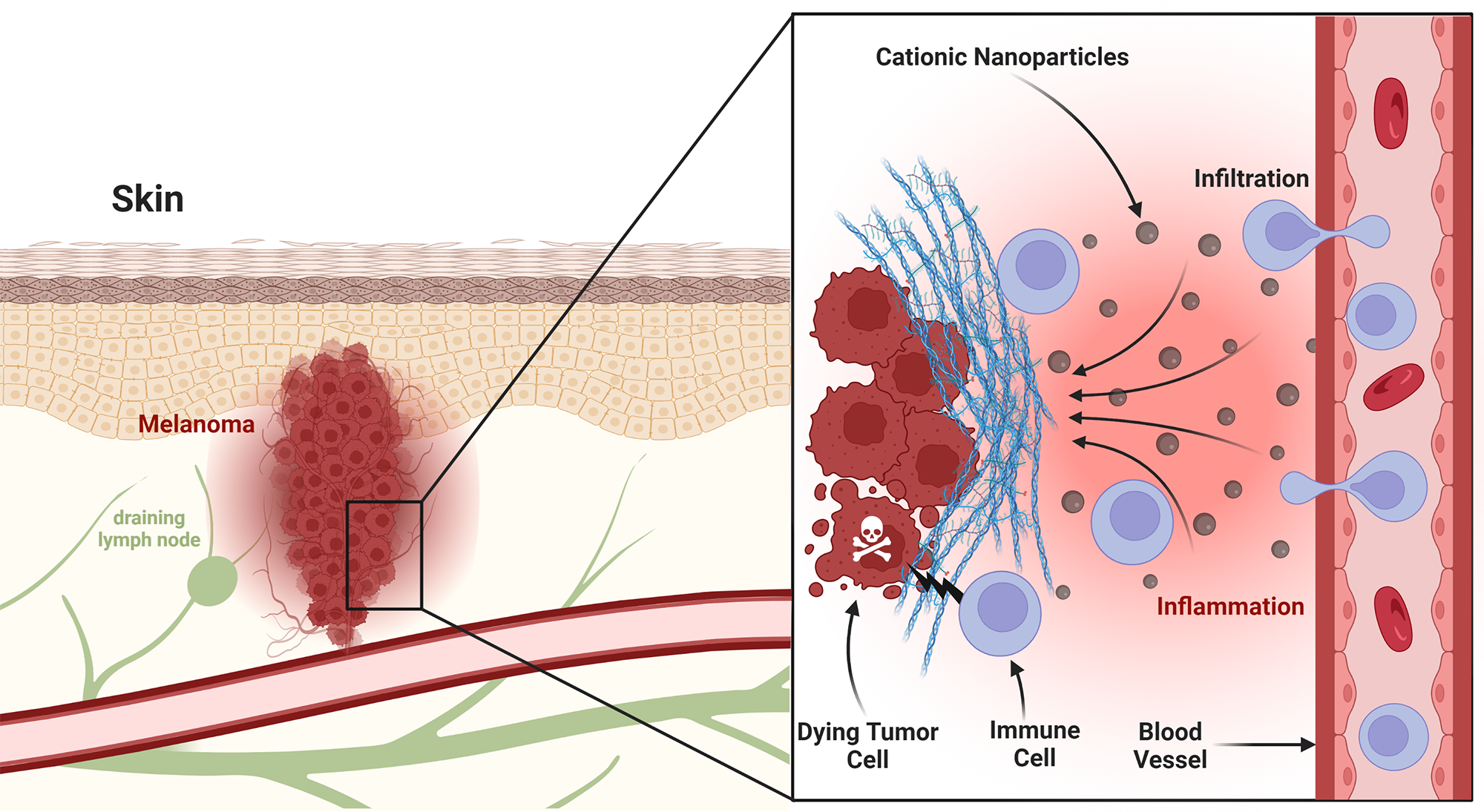 The charged nanoparticles—spheres ranging in diameter from 100 to 160 nanometers that were created in Salem’s lab—were injected around melanoma tumors in mice. The nanoparticles act as a beacon of sorts, allowing melanoma-fighting cells triggered by the adenovirus vaccine to locate the tumor and overcome its defenses.

“It’s a new approach to treating cancer and making vaccines work better,” Salem says. “Historically, vaccines haven’t had the level of translational success that they have promise for. This approach might finally realize the promise of vaccines to treat cancer.”

The adenovirus vaccine jump-starts the body’s cancer-fighting operation by instructing a family of immune cells, called cytotoxic T lymphocyte cells, to fan out on tumor search-and-destroy missions. But tumors secrete chemical signals to make themselves seem nonthreatening, and thus largely evade detection. The charged nanoparticles, when injected near a tumor, create an inflammatory response, akin to setting a house on fire. The T cells, circulating around, see the flames and rush to the site.

“The cationic nanoparticles create a localized inflammation at the tumor site,” explains Emad Wafa, postdoctoral researcher in the College of Pharmacy at Iowa and a co-author on the study. “It sends up a signal, ‘Hey, come over here, we have a situation here that needs to be taken care of.’ The nanoparticles are a critical addition to help the vaccine be effective.”

Other studies have demonstrated the success of using a combination of an adjuvant— essentially a vaccine booster designed to stimulate a stronger immune response—and a vaccine to locate and erase tumors. In one such study, led by Sean Geary, assistant research scientist in Salem’s lab and a co-author on this study, researchers injected an adjuvant called CpG directly into mouse tumors, which was combined with an adenovirus vaccine to fight tumors in mice. But CpG did not work as effectively in that study and is not as easy to mass manufacture.

“We have a synthetic agent that’s more cost-effective, it’s easier to manufacture, it’s more stable, and it would be easier for a physician to learn and use it, versus a biologically based agent,” says Salem, who has studied vaccines for 23 years. “It’s a conceptually different approach.”

The results were published online on July 20 in Science Advances, part of the Science family of journals. The study is titled, “Cationic nanoparticles enhance T cell tumor infiltration and antitumor immune responses to a melanoma vaccine.”

Read the original article on University of Iowa.