Buckyballs on Gold Are Less Exotic Than Graphene

C60 molecules on a gold substrate appear more complex than their graphene counterparts, but have much more ordinary electronic properties. This is now shown by measurements with ARPES at BESSY II and detailed calculations.

Graphene consists of carbon atoms that crosslink in a plane to form a flat honeycomb structure. In addition to surprisingly high mechanical stability, the material has exciting electronic properties: The electrons behave like massless particles, which can be clearly demonstrated in spectrometric experiments. Measurements reveal a linear dependence of energy on momentum, namely the so-called Dirac cones - two lines that cross without a band gap - i.e. an energy difference between electrons in the conduction band and those in the valence bands.

Using density functional theory and measurement data from spin-resolved photoemission, the team investigated the origin of the repeating Au(111) bands and resolved them as deep surface resonances. These resonances lead to an onion-like Fermi surface of Au(111).

Artificial variants of graphene architecture are a hot topic in materials research right now. Instead of carbon atoms, quantum dots of silicon have been placed, ultracold atoms have been trapped in the honeycomb lattice with strong laser fields, or carbon monoxide molecules have been pushed into place on a copper surface piece by piece with a scanning tunneling microscope, where they could impart the characteristic graphene properties to the electrons of the copper. 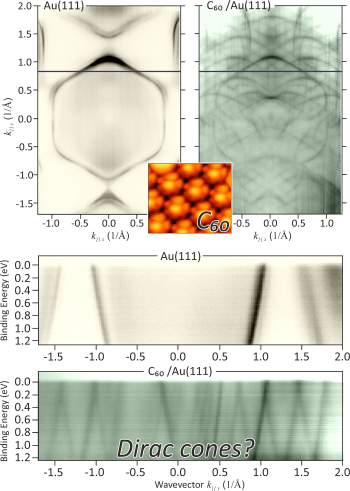 Measurement data from BESSY II before and after deposition of C60 molecules demonstrate the replication of the band structure and the emergence of cone-like band crossings. A scanning electron microscopy of the buckyballs on gold is superimposed in the centre.

A recent study suggested that it is infinitely easier to make artificial graphene using C60 molecules called buckyballs. Only a uniform layer of these needs to be vapor-deposited onto gold for the gold electrons to take on the special graphene properties. Measurements of photoemission spectra appeared to show a kind of Dirac cone.

"That would be really quite amazing," says Dr. Andrei Varykhalov, of HZB, who heads a photoemission and scanning tunneling microscopy group. "Because the C60 molecule is absolutely nonpolar, it was hard for us to imagine how such molecules would exert a strong influence on the electrons in the gold." So Varykhalov and his team launched a series of measurements to test this hypothesis.

In tricky and detailed analyses, the Berlin team was able to study C60 layers on gold over a much larger energy range and for different measurement parameters. They used angle-resolved ARPES spectroscopy at BESSY II, which enables particularly precise measurements, and also analysed electron spin for some measurements.

"We see a parabolic relationship between momentum and energy in our measured data, so it's a very normal behavior. These signals come from the electrons deep in the substrate (gold or copper) and not the layer, which could be affected by the buckyballs," explains Dr. Maxim Krivenkov, lead author of the study. The team was also able to explain the linear measurement curves from the previous study. "These measurement curves merely mimic the Dirac cones; they are an artifact, so to speak, of a deflection of the photoelectrons as they leave the gold and pass through the C60 layer," Varykhalov explains. Therefore, the buckyball layer on gold cannot be considered an artificial graphene.