At the Water's Edge: Self-assembling 2D Materials at a Liquid-Liquid Interface

The past few decades have witnessed a great amount of research in the field of two-dimensional (2D) materials. As the name implies, these thin film-like materials are composed of layers that are only a few atoms thick. Many of the chemical and physical properties of 2D materials can be fine-tuned, leading to promising applications in many fields, including optoelectronics, catalysis, renewable energy, and more.

In a recent study published first on June 13, 2022, and featured on the front cover of Chemistry--A European Journal, a team of scientists from Tokyo University of Science (TUS) and The University of Tokyo in Japan reported a remarkably simple way to synthesize heterolayer coordination nanosheets. Composed of the organic ligand, terpyridine, coordinating iron and cobalt, these nanosheets assemble themselves at the interface between two immiscible liquids in a peculiar way. The study, led by Prof. Hiroshi Nishihara from TUS, also included contributions from Mr. Joe Komeda, Dr. Kenji Takada, Dr. Hiroaki Maeda, and Dr. Naoya Fukui from TUS.

To synthesize the heterolayer coordination nanosheets, the team first created the liquid-liquid interface to enable their assembly. They dissolved tris(terpyridine) ligand in dichloromethane (CH2Cl2), an organic liquid that does not mix with water. They then poured a solution of water and ferrous tetrafluoroborate, an iron-containing chemical, on top of the CH2Cl2. After 24 hours, the first layer of the coordination nanosheet, bis(terpyridine)iron (or "Fe-tpy"), formed at the interface between both liquids.

The team made detailed observations of the heterolayer using various advanced techniques, such as scanning electron microscopy, X-ray photoelectron spectroscopy, atomic force microscopy, and scanning transmission electron microscopy. They found that the Co-tpy layer formed neatly below the Fe-tpy layer at the liquid-liquid interface. Moreover, they could control the thickness of the second layer depending on how long they left the synthesis process run its course.

Interestingly, the team also found that the ordering of the layers could be swapped by simply changing the order of the synthesis steps. In other words, if they first added a cobalt-containing solution and then replaced it with an iron-containing solution, the synthesized heterolayer would have cobalt coordination centers on the top layer and iron coordination centers on the bottom layer. "Our findings indicate that metal ions can go through the first layer from the aqueous phase to the CH2Cl2 phase to react with terpyridine ligands right at the boundary between the nanosheet and the CH2Cl2 phase," explains Prof. Nishihara. "This is the first ever clarification of the growth direction of coordination nanosheets at a liquid/liquid interface."

Additionally, the team investigated the reduction-oxidation properties of their coordination nanosheets as well as their electrical rectification characteristics. They found that the heterolayers behaved much like a diode in a way that is consistent with the electronic energy levels of Co-tpy and Fe-tpy. These insights, coupled with the easy synthesis procedure developed by the team, could help in the design of heterolayer nanosheets made of other materials and tailored for specific electronics applications. "Our synthetic method could be applicable to other coordination polymers synthesized at liquid-liquid interfaces," highlights Prof. Nishihara. "Therefore, the results of this study will expand the structural and functional diversity of molecular 2D materials." 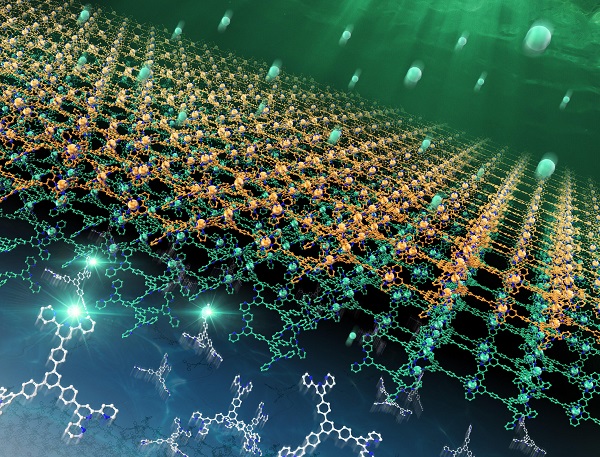 This image depicts the formation of the second layer in a heterolayer coordination nanosheet. Cobalt ions pass through the preexisting first layer (composed of iron coordination centers and terpyridine ligands), which has formed at the liquid-liquid interface between water and dichloromethane. They then assemble into coordinated layers by combining with terpyridine ligands.

With eyes set on the future, the team will keep investigating chemical phenomena occurring at liquid-liquid interfaces, elucidating the mechanisms of mass transport and chemical reactions. Their findings can help expand the design of 2D materials and, hopefully, lead to better performance of optoelectronic devices, such as solar cells.