COVID Virus May Tunnel Through Nanotubes from Nose to Brain

Nanotubes may provide a cunning answer to the mystery of how the virus that causes COVID infects neurons and produces long-lasting neurological symptoms.

As familiar to everyone as the COVID-causing coronavirus SARS-CoV-2 has become over the past two years, feverish research is still trying to parse a lingering puzzle. How, in fact, does the pandemic virus that has so changed the world cross over into the brain after entering the respiratory system? An answer is important because neurological complaints are some of the most common in the constellation of symptoms called long COVID. The mystery centers around the fact that brain cells don’t display the receptors, or docking sites, that the virus uses to get into nasal and lung cells.

SARS-CoV-2, though, may have come up with an ingenious work-around. It may completely do away with the molecular maneuverings needed to attach to and unlock a cell membrane. Instead it wields a blunt instrument in the form of nanotube “bridges”—cylinders constructed of the common protein actin that are no more than a few tens of nanometers in diameter. These tunneling nanotubes extend across cell-to-cell gaps to penetrate a neighbor and give viral particles a direct route into COVID-impervious tissue.

Researchers at the Pasteur Institute in Paris demonstrated the prospects for a nanotube-mediated cell crossing in a study in a lab dish that now needs to be confirmed in infected human patients. Given further proof, the findings could explain why some people who get COVID-19 experience brain fog and other neurological symptoms. Also, if the intercellular conduits could be severed, that might prevent some of these debilitating aftereffects of infection. 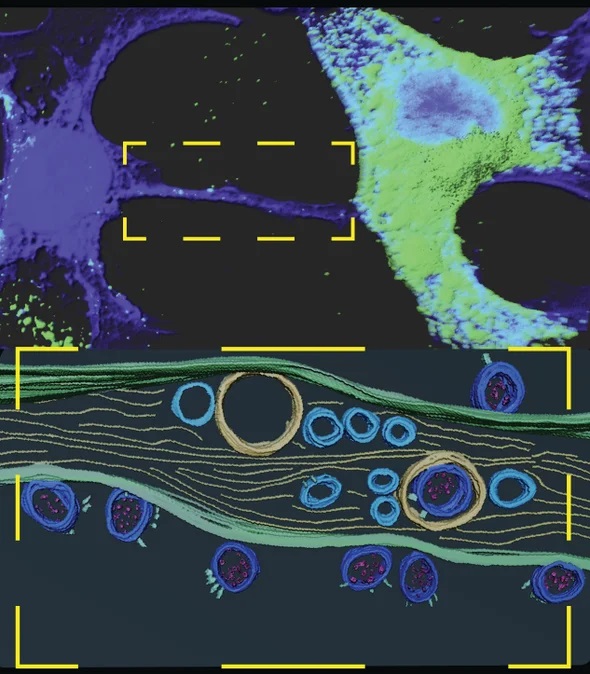 Tunneling nanotube bridge provides a conduit for SARS-COV-2 to cross from one cell to another. A closeup is shown below with viruses in transit.

The nanotube route “is a shortcut that propagates infection fast and between different organs, permissive or not permissive, to the infection,” says Chiara Zurzolo, a cell biologist at the Pasteur Institute, who conducted the study. “And it might be also a way for the virus to hide and escape the immune response.”

The virus may be capable of commandeering a cell’s own nanotubes, diverting them away from other routine tasks, such as transferring lipids and proteins between cells. Early research on SARS-CoV-2 suggested that it might be able to hijack similar cell projections. A 2020 paper published in the journal Cell found that cells infected with the novel coronavirus extended out antennalike feelers called filopodia with viral particles onboard.

SARS-CoV-2 typically gets into cells in the respiratory tract and elsewhere by latching its protruding “spike” protein to ACE2 receptors on their surface. Zurzolo and her team wondered if the coronavirus was using tunneling nanotubes to sneak into cells that were not studded with these receptors. To find out what was going on, the researchers took cells from monkey kidneys, infected them with SARS-CoV-2 and cultured them alongside human neurons in a lab dish.

Monkey kidneys cells are commonly used to model the human respiratory tract in studies of COVID-19 because the cells display ACE2 receptors. The neurons came from a cell line that was originally cultured from a cancer called neuroblastoma. These cells lack ACE2 receptors, but after 48 hours side-by-side with coronavirus-infected kidney cells, 62.5 percent of them were infected with SARS-CoV-2.

The team then used cutting-edge microscopy techniques to image how this viral transfer occurred. By tagging viral proteins with antibodies and fluorescent compounds so that they stood out, the researchers captured high-resolution images of the virus within the tunneling nanotubes that connected the cells. They could see both viral particles and little sacs called vesicles in which the virus copies itself. They also detected proteins that are part of the cellular machinery the virus uses to replicate. The imaging was so detailed that even the spike proteins that give the virus its prickly appearance were visible, the researchers reported in the journal Science Advances. Once nestled in the neuronal cells, the coronavirus was able to continue replicating.

The experiments also showed that cells infected with the coronavirus grew far more tunneling nanotubes than uninfected cells, suggesting that the virus itself spurs a cell to put out these connectors. SARS-CoV-2 isn’t the only pathogen that controls cells in this way. HIV also takes advantage of tunneling nanotubes to move between cells, and the Marburg virus triggers the growth of filopodia.

“The virus is so sinister,” says Nevan Krogan, a molecular biologist at the University of California, San Francisco, who was not involved in the new research but conducted the 2020 study that found the increase in filopodia after coronavirus infection. “It’s manipulating all of our processes with a very limited genetic [repertoire].”

The cellular bridges may play a role in how the virus sometimes triggers long COVID, Krogan says. Zurzolo and her team suspect that the virus enters through the nose and travels along to one of the brain’s two olfactory bulbs, which contain tissue that processes smells. The nanotubes may help the virus avoid antibodies, allowing it to linger longer in the body. “If you can manipulate enzymes that are responsible for this filopodia or nanotube formation, this could be a way to maybe have an effect on long COVID,” Krogan says.

His work showed that the coronavirus increases production of the enzyme casein kinase II, which in turn helps build the protein backbone of filopodia and nanotubes. Senhwa Biosciences, a Taiwan–based drug development company, is currently conducting clinical trials of a drug called silmitasertib that inhibits casein kinase II to probe whether it has an impact on COVID-19 recovery.

Meanwhile Zurzolo and her colleagues are now working to prove that their hypothesis about how SARS-CoV-2 reaches the brain occurs in actual infections. If they can do so, they may be a step closer to figuring out why, for some people, COVID-19 triggers a lingering health debacle.