Bottom-up construction with a 2D twist could yield novel materials Tetrahedron-shaped nanoparticles are interesting enough by themselves, but under the right circumstances, Rice University scientists have discovered they do something remarkable.

While doing a routine check on a batch of tiny gold tetrahedrons, Rice chemist Matthew Jones and graduate student Zhihua Cheng found their microscopic particles had the unanticipated ability to arrange themselves into 2D chiral superstructures.

The discovery, which is detailed in a new study in Nature Communications, is likely the first-known spontaneous self-assembly of a planar chiral structure, Jones said.

Chiral structures are mirror opposites, similar forms, like right and left hands, that can’t be superimposed on one another. It’s an important distinction in drug design, where chiral molecules may be therapeutic in one handedness and toxic in the other.

Tetrahedrons themselves are not chiral — that is, they can be superimposed on their mirror images. That made it doubly surprising that they fell so easily into chiral forms during experiments when evaporated onto a surface, Jones said.

“This is unexpected,” he said. “It’s very rare to see a chiral structure form when your building blocks are not chiral.”

Jones said the 2D superlattices the tetrahedra create could lead to advances in metamaterials that manipulate light and sound in useful ways. “There’s a whole series of papers that predict some of the most interesting properties from optical metamaterials arise in structures that have chirality at this length scale,” he said. 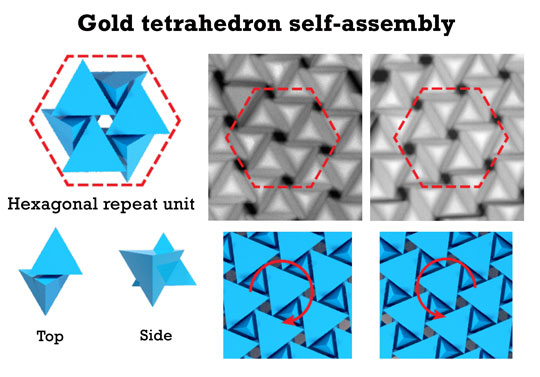 The tetrahedrons form hexagonal domains with either a right-handed or left-handed twist. During assembly, the particles come together with their tips facing either up or down. When the points meet, the particles must slide past one another to continue getting closer together, and this movement forces all six particles in an assembling hexagon to randomly rotate to the left or right.

The chiral surfaces created at Rice are ultrathin assemblies of particles that incorporate left-handed and right-handed domains in equal numbers. That matters in how they process circularly polarized light, a useful tool in spectroscopy and plasmonics.

Jones said one way to build precise 2D structures is to start with a large piece of material and work from the top down, like a sculptor, removing unwanted bits to arrive at the desired shape. Self-assembly is a bottom-up approach where a large structure, like a tree, grows from the joining of countless small pieces. Bottom-up assembly is typically the faster and more efficient of the two approaches.

“Most of the time people use spherical particles in self-assembly, but you just can’t get that much complexity in terms of the structure,” Jones said. “My group takes non-spherical particles and tries to get them to assemble themselves into more sophisticated structures.”

Having discovered a way to make well-formed gold nano-tetrahedrons, Jones and Cheng put them in a solution and placed a droplet on a substrate. “We just let the droplet evaporate, and what we get out are these amazing superlattices,” he said.

“There are two things that make them amazing,” he said. “One is that they’re exclusively two-dimensional, and the second, which is more interesting, is that they’re chiral.”

Jones and Cheng initially thought the particles might grow in three dimensions, “but we now understand how they form such a complicated 2D structure that is two particles thick,” Jones said. 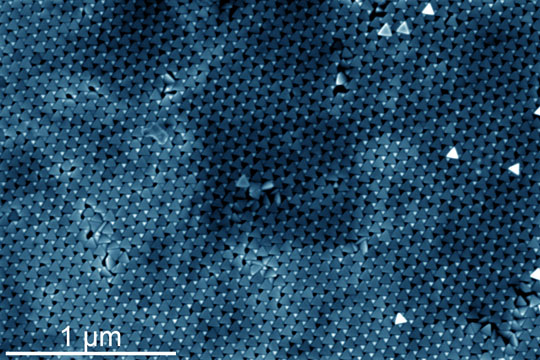 A false-color image from a scanning electron microscope shows hundreds of gold tetrahedrons — nanoparticles shaped like pyramids — that randomly form “chiral” structures as they self-assemble in a flat two-dimensional sheet.

Cheng said, “Initially we didn’t expect them to assemble at all. I just wanted to see that the particles were pure and uniform in size. When I saw the different chiral arrangements it was a total surprise to me that they assembled into such a cool structure!”

Jones said the particles take advantage of several phenomena as they assemble, including van der Waals forces, electrostatic repulsion between the molecules on the tetrahedron surfaces and the substrate the droplet is placed on. “Over time, as the droplet evaporates, the particles go from mostly repulsive to strongly attractive, and that’s how they crystallize into superlattices,” he said.

The material’s hexagonal domains form when the tetrahedrons come together with their tips either up or down. As the particles assemble, their points eventually meet, requiring them to slide past each other a bit to continue getting closer together. This forces all the particles in the assembling hexagon to randomly rotate one way or the other, forming left- and right-handed chiral domains.

Jones noted there is a mathematical foundation to the phenomenon that someone may eventually figure out.

“It was only recently that the densest packing of spheres was mathematically proven, so it may be some time before we can expect something similar for tetrahedra,” he said. “It’s very, very complicated.”

Jones said he sees the possibility of one day “assembling a material like this at the surface of a swimming pool” so that advanced metamaterial coatings could be applied to virtually any object simply by dipping it through the liquid surface.