Nanoparticle advances could overcome a hurdle to producing more compact smartphones, while low toxicity quantum dots may allow the imaging of biological processes in living tissues.

New nanoparticles and quantum dots from a major producer of capacitors for smartphone manufacturers, could bring tiny, printable components and quantum-scale biomarkers into our daily lives.

Murata Manufacturing’s products, including multi-layer ceramic capacitors (MLCCs) and passive components, are found in many of the world’s mobile phones and electronic devices. Murata’s MLCCs – which regulate voltage and the flow of current by temporarily storing excess electrical charge, thus enabling the stable function of electronics – currently make up about 40% of MLCCs sold globally.

High-end smartphones are equipped with about 1,000 MLCCs, and recent advances in battery and circuit miniaturization mean the capacity and size of MLCCs is now one of the key bottlenecks to producing lighter and more compact models.

Now new a MLCC in development at Murata could be just 0.25 mm long – significantly more minute than the smallest ones the company produces today.

MLCCs usually consist of thin films of insulating, or ‘dielectric’, ultrafine grains sandwiched between electrodes. “We have been trying to develop various fabrication methods for dielectric nanoparticles in order to construct multiple, very thin dielectric layers, to achieve high electrical capacity in a very small package,” explains Keigo Suzuki, who leads Murata’s nanoparticle manufacturing technology research and development in Kyoto, Japan. However, the true breakthrough, he says, have been fabrication methods suitable for new business. 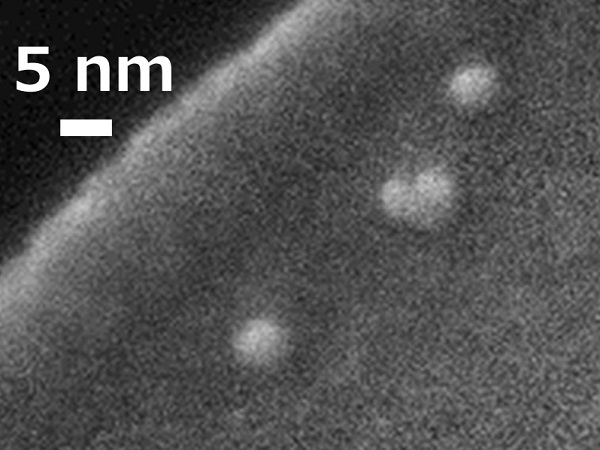 “We developed a method for fabricating various functional oxide nanoparticles using a technique that disperses the compound in solution, a sort of inverse micelle technique,” says Suzuki. In the technique, a hydrolysis reaction takes place in small water droplets dispersed in hydrophobic solvent. The resultant oxide nanoparticles repel each other in the right solution. 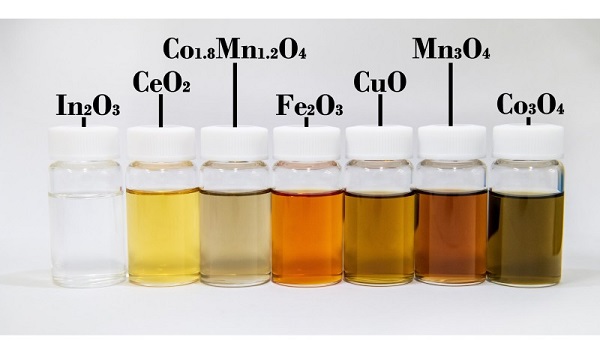 The double-salt polymerization method relies on the interaction between two metal-containing double-salts in solution. Through dehydration condensation of the salts, metal oxides are formed and polymerized, resulting in nanoparticles with a consistent morphology that are well dispersed in a liquid medium to form a colloidal solution.

What sets Murata’s nanoparticles apart is that they are resistant to agglomeration, which is due to the short organic ligands incorporated in the nanoparticles as part of the production process. These ligands also make it possible to sinter the nanoparticles at relatively low temperatures, opening the possibility of use in inks and other printable applications. Sintering is a process whereby a material can be compressed into a solid mass through heating or pressure, without melting it. 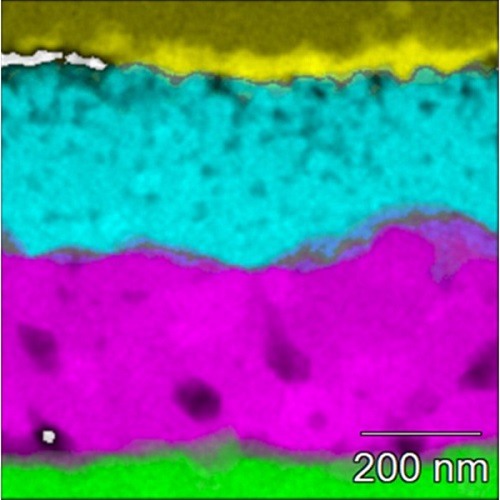 “The potential for printable and flexible electronics is particularly exciting,” says Yusuke Otsuka, who developed double-salt polymerization method. “This easy sintering capability makes it possible not only to produce various new devices, such as sensors, transparent conductive films, and photoelectrodes, but also to stack layers of different nanoparticles for efficient charge-carrier separation in many technologies used for energy conversion.”

The potential uses within renewable technologies is promising, says Otsuka: “These nanoparticles, based on elements commonly found on Earth, are fairly environmentally benign, will show high performance in solar cells and electrical components, and strong photocatalytic activity.” 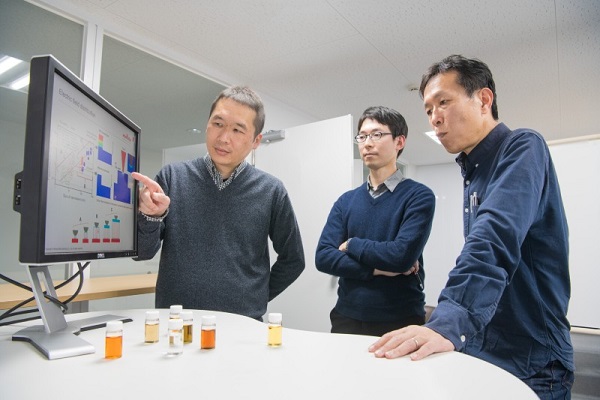 (Left to right) Keigo Suzuki, Yusuke Otsuka and Norikazu Fujihira, who work on Murata’s nanoparticle manufacturing technology in Kyoto, Japan, have developed methods to mass produce a variety of nanoparticles.

Murata have also developed new quantum dots, which are a special class of nanoparticle that display quantum mechanical optical and electronic properties not seen in larger particles.

Quantum effects limit the energies of an atom’s electrons and electron holes, a space where an electron could but does not exist, giving the particles the ability to emit light at a very specific wavelength when exposed to ultraviolet light. This property can be used for tagging and imaging biological tissues, with applications for medical imaging.

“But the vast majority of commercialized quantum dots consist of harmful and toxic elements such as cadmium and selenium,” explains Norikazu Fujihira, who is also on Murata’s R&D team. “This makes it difficult to use these quantum dots, not only for general products, but also as chemical reagents and for medical applications.” 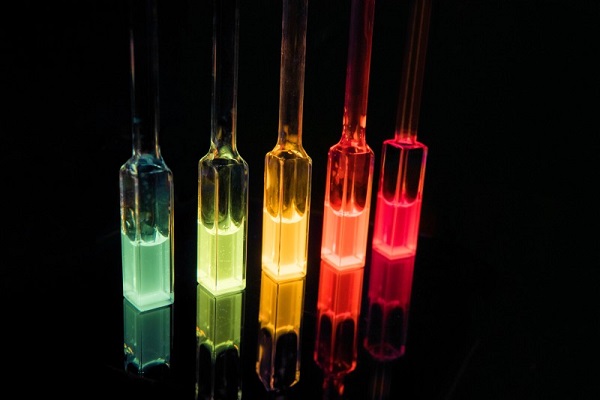 A new type of quantum dot has the benefit of being free from some of the common toxic materials found in conventional quantum dots. Quantum dots are fabricated by a commercial-scale manufacturing process to reliably produce particles with a specific peak luminescence wavelength.

In collaboration with Nagoya University, Fujihira and his colleagues have developed a new type of quantum dot product by combining semiconductor compounds. Importantly, the dots are free of highly toxic materials, such as cadmium, selenium, lead or mercury. This opens the door to using them to tag and image biological processes in living tissue, explains Fujihira.

These dots also have a greater brightness and a longer life than commonly used materials for imaging within living tissues, such as fluorescent dyes or green fluorescent protein.

Murata hopes its quantum dots will prove particularly useful for intracellular imaging and in vivo imaging of transplanted cells, and their accumulation and integration in tissues and organs. 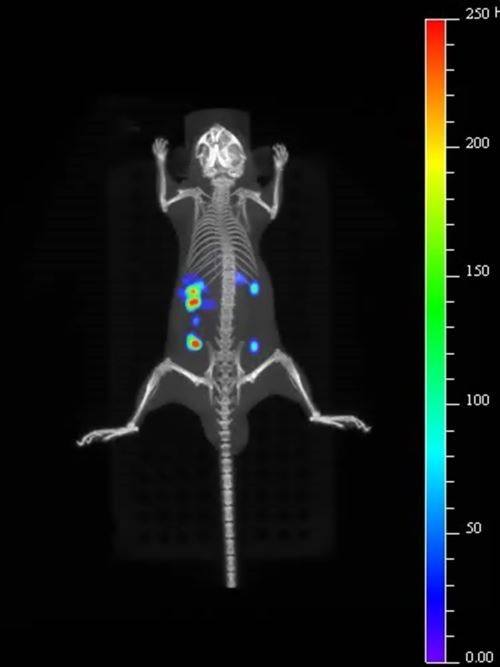 New quantum dots developed by Murata are proving useful for intracellular and in vivo imaging.

Fujihira’s team also succeeded in developing a commercial-scale manufacturing process to reliably produce particles with a specific peak luminescence wavelength, he says. And they have now commercialized the colloidal quantum dots for use as fluorescent markers for living cells.

While energy conversion and optical devices such as LEDs and displays could also benefit, Murata’s focus has been biological imaging, for which there is great demand, says Fujihira. The team is also continually improving the luminescence properties of the dots through sophisticated ligand engineering, tweaking qualities like brightness, and the sharpness of light emission, he adds.

“We see the next big challenge as being how to realize the potential of these materials consistently in everyday devices,” says Suzuki. “But we expect nanoparticle development will become increasingly important due to their high functionality and efficient use of resources.”

In particular, Suzuki points out that nanoparticles and quantum dots are expected to make a significant impact in the renewable energy sector, lowering the impact of the resources that go into making solar cells, and with a potential use as a newly efficient photocatalyst for water splitting during the production of hydrogen for energy.