Electrical energy from wind or sun can be stored as chemical energy in hydrogen, an excellent fuel and energy carrier. The prerequisite for this, however, is efficient electrolysis of water with inexpensive catalysts. For the oxygen evolution reaction at the anode, nanostructured nickel silicide now promises a significant increase in efficiency. This was demonstrated by a group from the HZB, Technical University of Berlin and the Freie Universität Berlin as part of the CatLab research platform with measurements among others at BESSY II.

Electrolysis might be a familiar concept from chemistry lessons in school: Two electrodes are immersed in water and put under voltage. This voltage causes water molecules to break down into their components, and gas bubbles rise at the electrodes: Oxygen gas forms at the anode, while hydrogen bubbles form at the cathode. Electrolysis could produce hydrogen in a CO2-neutral way - as long as the required electricity is generated by fossil free energy forms such as sun or wind.

Crystalline nickel silicide (left) is chemically transformed into nanostructured material with excellent catalytic properties for the electrolytic splitting of water and the production of valuable nitrile compounds.

The only problem is that these reactions are not very efficient and extremely slow. To speed up the reactions, catalysts are used, based on precious and rare metals such as platinum, ruthenium or iridium. For large-scale use, however, such catalysts must consist of widely available and very cheap elements.

To accelerate the oxygen evolution reaction at the anode, nickel-based materials are considered as good candidates. Nickel is resistant to corrosion, hardly toxic and also inexpensive. Until now, however, energy-intensive high-temperature processes have been mostly used to produce nickel-based catalyst materials. 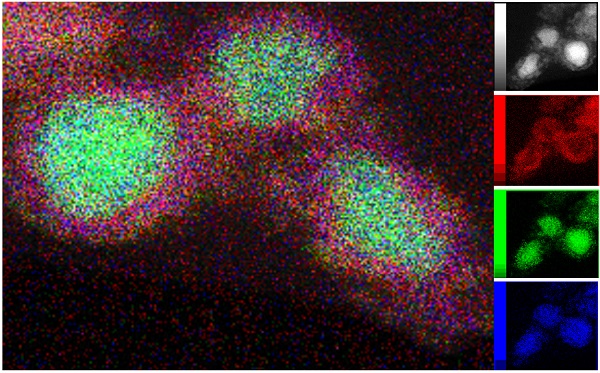 Transmission electron microscopy (TEM) of the catalytically active phase was combined with energy-dispersive X-ray spectroscopy to map the distribution of Ni (green), Si (blue), and oxygen (red) around the core-shell structures.

A team led by Dr. Prashanth Menezes (HZB/TU Berlin) has now found a “soft chemical” way to produce an efficient catalyst based on nickel-silicon intermetallic nanocrystals.

"We combined the element nickel with silicon, the second most abundant element in the Earth's crust, and achieved nanostructuring via a chemical reaction. The resulting material has excellent catalytic properties," says Menezes. The crystalline Ni2Si served as a precatalyst for the alkaline oxygen evolution reaction at the anode and undergoes surface transformation to form nicke(oxy)hydroxide as an active catalyst under operating condition. Remarkably, the water electrolysis was further paired with value added organic oxidation reaction in which electrosynthesis of industrially valuable nitrile compounds were produced from primary amines with selective and full conversion under mild conditions. Such electrosynthetic methods can boost up the hydrogen generation at the cathode and can simultaneously provide access to valuable industrial products at the anode.

Compared to modern catalysts based on Nickel, Cobalt, Iron, Ruthenium and Iridium, the nanoporous Ni2Si is significantly more active and remains stable for longer reaction time at industrial-level conditions. To understand the behaviour of Ni2Si in more detail, the team combined different measurement methods, including elemental analyses, electron microscopy and modern spectroscopic measurements at BESSY II. "In the future, even industrial alkaline water electrolysers could be equipped with a coating of this nanoporous nickel silicide," says Menezes.