According to a study published on Nano Letters, researchers led by Prof. WU Zhikun from the Hefei Institutes of Physical Science (HFIPS) of the Chinese Academy of Sciences (CAS) obtained reduced palladium (Pd)-based alloy nanoclusters (abbreviated as Au4Pd6 and Au3AgPd6) for the first time. The Au3AgPd6 is the smallest tri-metal alloy nanocluster with well-defined composition/structure so far, according to the researchers.

Catalysis is closely related to surface. For metal catalysts, increasing the proportion of surface atoms can improve the utilization efficiencies of metals, which is particularly important for noble metal catalysts such as gold and platinum. Thus, reducing the number of kernel atoms in metal nanocluster is expected to improve the metal utilization efficiency, and an extreme case is to reduce the kernel atom number to only one. However, the synthesis of single-atom-kernelled nanocluster is difficult, especially when the kernel atoms are relative active metal atom such as silver (Ag) and copper (Cu) due to the stability issue.

It is well known that alloying can not only improve the catalytic performance of clusters, but also stabilize them. A large number of alloy nanoclusters with group 11 metal (gold (Au), Ag, Cu) as the main body have been reported, but the alloy nanoclusters with reduced Pd as the main body have not been mentioned, mainly because Pd and thiolate can easily form a +2 charged crown-like structure, which is very stable and difficult to be reduced.

In order to avoid the formation of crown-like structure, some special procedures must be adopted, such as the procedure of increasing steric hindrance of thiolate. On the other hand, the stability endows Pd-thiolate complex with the ability to protect the single atom kernel as a shell, which inspires enthusiasm for the synthesis investigation. Unfortunately, Pd-based nanoclusters with a single silver atom kernel have not been obtained by the traditional mixed metal salt co-reduction method.

The recently proposed anti-galvanic reduction (AGR) provided a novel solution: the co-reduction method can be first used to synthesize Au-Pd cluster with a single gold atom kernel, then AGR is used to replace the kernel gold atom with Ag atom.

In this study, the researchers chose the CO2 electroreduction as the model reaction to investigate the catalytic performance of the as-obtained alloy nanoclusters due to its significance. Results showed that Au3AgPd6 had better catalytic activity and selectivity than Au4Pd6 (the Faraday efficiency of CO2 to CO is 94.1% and 88.1%, respectively), indicating that AGR can not only improve the catalytic performance, but also improve the utilization efficiency of gold (100%) and reduce the cost of the catalyst.

Compared with the previous Au47Cd2 obtained by two-phase AGR method, the mass activity of the as-obtained Au3AgPd6 was also higher (55.6 and 266.7 mA mg-1, respectively).

Taking Au25 as an example to illustrate the composition of metal nanoclusters: a. metal kernel; b. metal-ligand shell; c. total structure of Au25. Green is Au, yellow is S, C and H are omitted. 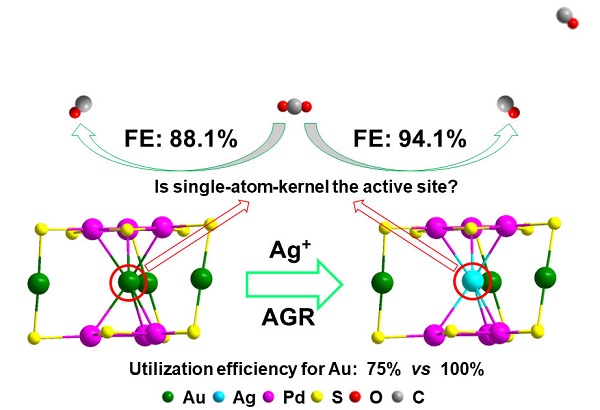 Improving the catalytic performance and exploring the active sites of clusters through AGR.

Further experiments manifested that the kernel atom is not the active site of the reaction, but can change the catalytic and other properties by tuning the electronic structure of the nanocluster, which provides a reference for regulating the performance of the cluster.

"This work is important for further research," said Prof. WU, "we put forward the strategy for the meal utilization efficiency improvement, and proposed the concept of 'sing-atom-kernelled nanocluster catalyst'."

This study deepens the understanding of cluster active sites, and provides guidance for subsequent research and applications.