Industry uses magnetic materials in applications ranging from data storage and cell phones to motors and sensors. Researchers are always looking for new magnetic particles as the technology moves to smaller and smaller scales.

In this study, researchers first theoretically predicted, designed, and then synthesized a new, extremely small, thermally stable magnetic nanoparticle. The nanoparticle is designed to be a small symmetric cluster of atoms that acts as a superatom. In superatoms, quantum confinement causes the electronic states of the cluster of atoms to take on an arrangement that mimics the electronic shells and occupancies of a single atom. This gives superatoms unique properties that are rare in nature. In the new nanoparticle, two different electronic subshells are filled; one with 57 electrons and the other with 50 electrons. This dual shell filling produces the energetic stability that enables the superatoms to be synthesized and creates the stable magnetic orderings that give superatoms their unique properties. 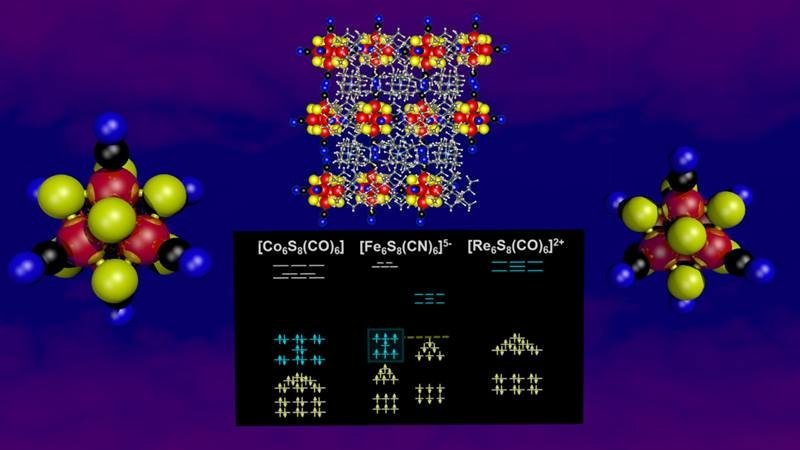 The superatom cluster (Fe6S8(CN)6-5) with a large spin magnetic moment and enhanced stability. The stability is due to dual shell filling, with the spin up and spin down shells both filled but with a different number of electrons.

Hund’s rule in atomic physics and the Stoner model in solid-state physics describe the traditional mechanisms by which spin magnetic moments arise in atoms and ferromagnetic metals. In both models, valence electrons avoid pairing by occupying half-filled orbitals, which increases the exchange energy and lowers the Coulomb repulsion. In this work, researchers from Virginia Commonwealth University, Columbia University, and Harvard University detailed a new mechanism for the formation of magnetic moments in which the quantum confinement of electrons in clusters splits their electronic structures into distinct subshells with different spin directions and number of available orbitals. The filling of each subshell to reach closed-shell electronic configuration stabilizes the cluster and creates differential spin occupations, i.e., a magnetic moment. This mechanism bears a striking resemblance to the mechanism governing magnetic semiconductors, but it uniquely operates at the nanoscale. Jahn-Teller distortions typically prevent the formation of high spin states in clusters but the dual subshell filling mechanism results in both high electronic stability and a large magnetic moment. This is ideal for applications in spin-based electronics because the electronic structure is inherently spin-polarized, and the magnetic moment arising from filling both subshells is robust against structural distortions and defects.