Inflammatory bowel disease (IBD), also known as "green cancer", is a chronic, non-specific disease of the intestine. IBD includes ulcerative colitis and Crohn's disease, both of which tend to be debilitating, lifelong conditions that can prove fatal in severe cases. Currently, there is no cure for IBD. The main clinical treatments are drugs such as aminosalicylic acid preparations and corticosteroids, but they are often accompanied by gastrointestinal problems, anaemia, and various intestinal complications. Finding alternative, more effective options is a priority for researchers.

In a study published in the KeAi journal Fundamental Research, researchers from China explored a treatment method using ultrasmall Au25 – gold - nanoparticles. In previous studies, these nanoclusters have been found to effectively eliminate a variety of reactive oxygen species (ROS), a type of free radical molecule that can build up and damage DNA, RNA and proteins in a cell. Elevated levels of ROS are commonly found in the gastrointestinal tract of IBD patients. 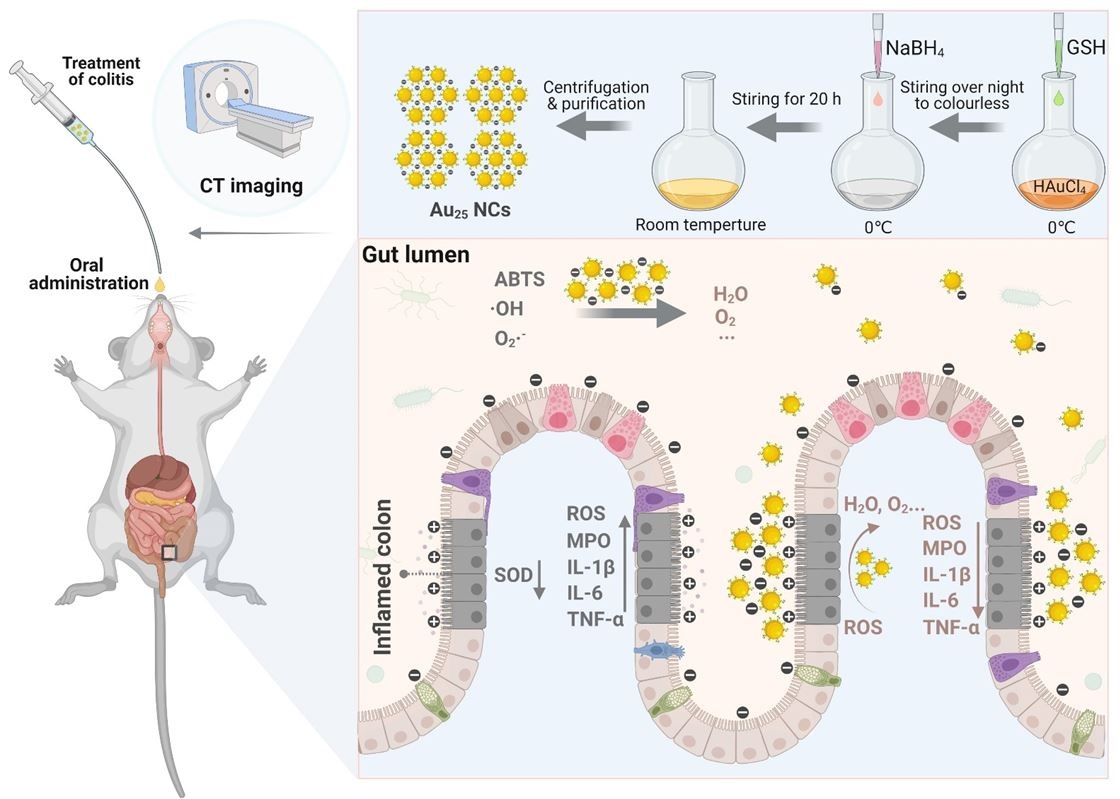 Synthesis of Au25 nanoclusters and the treatment process for colitis in mice.

The team found that administering Au25 nanoclusters orally to mice suffering from colitis eliminated ROS, increased antioxidant enzymes, and inhibited pro-inflammatory cytokines, without any obvious side effects. According to one of the paper’s authors, Fei Wang of China’s The Seventh Affiliated Hospital of Sun Yat-Sen University, a reduction in the inflammation in the gastrointestinal tracts of the mice was observed within 24 hours. She adds: “And the fact that these nanoclusters can be administered orally, means there is no need for invasive procedures.”

In addition, the team found that the nanoclusters have a number of benefits when compared with natural enzymes used in traditional IBD treatments, including lower cost, better stability, mass synthesis and easier storage. Wang explains: “The storage of Au25 nanoclusters was not affected by pH, temperature or solution medium, and their good physiological stability and acid resistance meant they were easily able to access the inflamed colon. They also have good biocompatibility and chemical stability and can remove a variety of ROS.”

Wang concludes: “Au25 nanoclusters offer a promising strategy in the research field of nanomedicine therapy for IBD. We believe this study demonstrates their value as a scientific basis and experimental basis for the clinical treatment of IBD.”