Two-dimensional materials, which consist of a single layer of atoms, exhibit unusual properties that could be harnessed for a wide range of quantum and microelectronics systems. But what makes them truly special are their flaws. “That’s where their true magic lies,” said Alexander Weber-Bargioni at the Department of Energy’s Lawrence Berkeley National Laboratory (Berkeley Lab). Defects down to the atomic level can influence the material’s macroscopic function and lead to novel quantum behaviors, and there are so many kinds of defects that researchers have barely begun to understand the possibilities. One of the biggest challenges in the field is systematically studying these defects at relevant scales, or with atomic resolution.

Artificial intelligence suggests a way forward. Researchers at Berkeley Lab recently unveiled a new, fast, and readily reproducible way to map and identify defects in two-dimensional materials. It uses convolutional neural networks, which are an application of artificial intelligence, to quickly analyze data from autonomous experiments, which in recent years have become a powerful tool for imaging these exotic materials.

“Defects can be used advantageously, or they can cause issues with the macroscopic function of the material,“ said John Thomas, a postdoctoral research fellow in the Weber-Bargioni Group at the Molecular Foundry, a DOE Office of Science user facility at Berkeley Lab where this research was conducted. Thomas devised the approach that couples AI with autonomous discovery. “This combination gives us a nice way to screen for defects and measure them,” he said. The method could dramatically reduce the time required to characterize two-dimensional materials and use them in next-generation quantum and electronic devices. The scientists reported their research in a paper published in npj Computational Materials.

Understanding the quantum properties of solids has enabled breakthrough technologies over the decades, such as the transistor and laser. Now, as scientists pursue other applications that harness quantum information science, such as quantum sensing and computing, it’s critical to better understand a phenomenon in solids called quantum coherence. This is the focus of the Center for Novel Pathways to Quantum Coherence in Materials (NPQC), an Energy Frontier Research Center (EFRC) led by Berkeley Lab. The center’s goal is to dramatically improve scientists’ understanding and control of coherence in solids, which could lead to new devices and applications. And a big part of this work is studying a material’s minute flaws.

In this specific research, which was supported by the NPQC EFRC, Thomas and Weber-Bargioni, who is a co-PI in the EFRC, collaborated with Marcus Noack of Berkeley Lab’s Applied Mathematics and Computational Research Division. Noack, who is the lead for autonomous, self-driving experiments at Berkeley Lab’s Center for Advanced Mathematics for Energy Research Applications (CAMERA), developed gpCAM, the system used for autonomous experiments. The group tested their AI-enhanced approach on material made from a single layer of tungsten disulfide (WS2) grown on a substrate of graphene and silicon carbide.

Collecting high-resolution spectroscopic data on sulfur vacancies (a kind of defect) in a square sample of the material measuring 125×125 pixels would require roughly 23 days using the conventional approach to scanning tunneling microscopy (STM). STM offers a powerful way to collect spectroscopic surface information and connect it to macroscopic phenomena, but creating a full spectral picture, said Thomas, can often be complicated by a number of factors that can arise during such a long time.

Reducing the time needed to acquire the data could reduce the risk of those complications. By combining STM measurements with machine learning tools, the new approach cut the imaging time down to about 8 hours.

“From about three weeks down to a third of a day,” Thomas said. “It’s a good leap forward.” 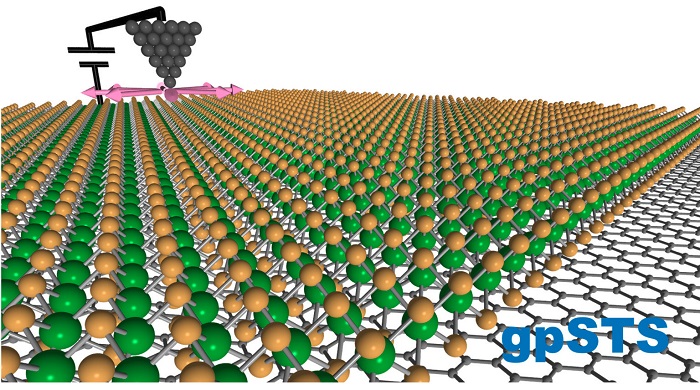 Illustration depicts an experiment which directs an ultrasharp probe across a 2D material, capturing the local atomic and electronic structure, that is controlled via autonomous discovery.

WS2 is a transition metal dichalcogenide (TMD), a material with properties that make it appealing for applications like quantum emitters, devices that can produce a single photon at a time and which could lead to other quantum applications. In addition, defects like sulfur vacancies in TMDs hint at exotic new ways to manipulate electrons and photons in electronic devices.

But WS2 is only the beginning. The new technique could be used to generate high-dimensional surface data on almost any type of two-dimensional material, Thomas said, and lead to the kind of systematic high-resolution study that the field needs. In addition, the method may be extended beyond STM to other spectroscopic techniques, including atomic force spectroscopy, photo STM, and in ultrafast STM. It is available for public use as an open access software package called gpSTS, where Thomas is the lead developer.

“Hopefully we’ve made a tool that anyone can pull up, and add to most STMs out there,” Thomas said. “For myself, we’ll continue delving into different quantum materials and new and novel defects.”

The machine learning component of this research benefited from the expertise of CAMERA, which is aimed at delivering the fundamental new mathematics required to capitalize on experimental investigations at scientific facilities.

This work was supported by DOE Office of Science.