Researchers at the University of Tsukuba report a new procedure to produce microscopic single crystals in the shape of hollow vases based on spontaneous crystal growth, which may provide a source of storage containers for nanotechnology applications.

Scientists from the Department of Materials Science at the University of Tsukuba developed a new method to produce micrometer-scale single crystals in the form of hollow vessels. By drop-casting an ethanol solution onto a quartz substrate, the molecules can spontaneously assemble into the proper shape. This research may open the way for a new line of experiments in which chemical processes can be contained within these microscopic vessels. 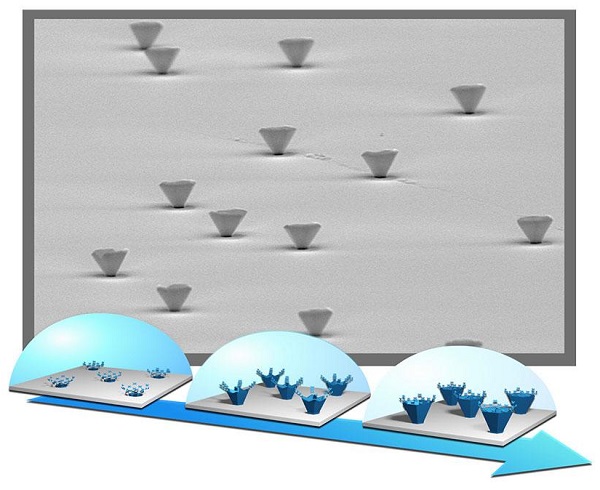 Placing a fancy bowl made of crystal in a conspicuous spot in your house can make a positive impression on your guests. But an even more impressive feat would be the ability to create such a vessel as a single microscopic crystal. While some tiny organisms have been known to exhibit this type of expertise, it can be challenging to scientists to reproducibly make these nano-containers, because uncontrolled growth can lead to misshapen final products.

Now, a team of researchers at the University of Tsukuba have reported a new procedure to reproducibly create hollow vessel-shaped crystals that are uniform in size and attached to a substrate with their open side facing upwards. The crystals were grown from molecules that had a paracyclophane core and with four (methoxyphenyl)ethynyl arms, called (S)-CP4, or its mirror-image molecule, (R)-CPP4. To produce the vases, a heated solution of (S)-CPP4 was gently dropped onto a quartz substrate under ambient conditions. When the solution cooled, the molecules began to spontaneously crystallize. "Using this procedure, we were able to achieve synchronous, uniaxial, and stepwise growth of micrometer-sized single crystals," says senior author Professor Yohei Yamamoto.

The team used X-ray crystallography and scanning electron microscopy to study the resulting structures. The side walls of the vessels grew outward with hexagonal symmetry, leaving a void inside the facets. The size of the side walls was found to be nearly constant, with a thickness of just 500 nanometers. The researchers also showed how strong intermolecular interactions give the vessel mechanical strength. Many crystal vessels can be fabricated simultaneously, and a variety of shapes can be produced. For example, excess edge or body growth gives rise to "flower" or "jewel" forms, respectively.

"Hollow crystals with Intricate morphologies and well-developed crystalline edges and facets can be very useful as tiny containers," says Professor Yamamoto. As a proof-of-concept, the team melted a tiny sample inside a crystal vessel and found that the resulting liquid stayed inside. On the basis of this, we might see a new type of micro-sized lab equipment, in which reactions can be performed with extremely small amounts of chemicals.