Researchers have succeeded in characterizing the chemical changes in proteins that are typical for epigenetic modifications using nanopore analysis.

Changes known as epigenetic modifications play an important role in cancer development, among other things. Being able to analyze them quickly and reliably could, for example, contribute significantly to the further development of personalized therapy. A research team from the Institute of Physiology at the University of Freiburg has now succeeded in characterizing the chemical changes in proteins that are typical for epigenetic modifications using nanopore analysis. The researchers have published their research results in the Journal of the American Chemical Society (JACS).

In recent years, nanopores have become a widely applicable tool for the analysis of molecules. Due to their special properties, they allow the structure of molecules to be analyzed within fractions of a second: As cylindrically arranged proteins, nanopores form tiny channels only a few millionths of a millimeter (nanometer) in diameter that can be embedded in biomembranes. "For the experiments, we apply a constant voltage across the membrane so that ions from the surrounding medium flow through the pore. This creates a constant, precisely measurable electric current" explains Prof. Dr. Jan C. Behrends from the Faculty of Medicine at the University of Freiburg, in whose laboratory the now-published experiments took place. However, when a molecule migrates into the pore, the current is blocked: the larger the molecule, the more strongly it is blocked too. 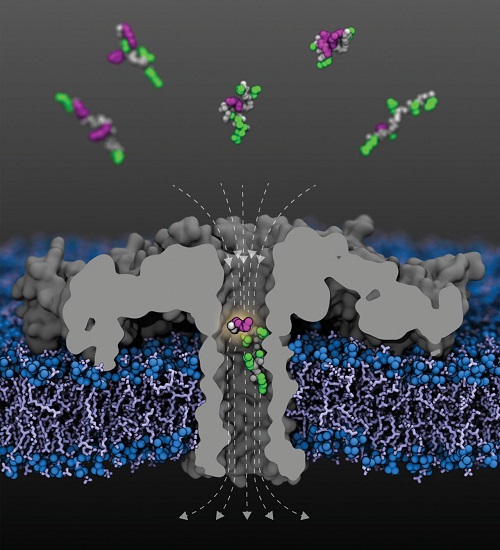 Cut-open view of the modified (R220S) aerolysin pore (gray) with field lines (dashed) in a lipid membrane. Fragments of human histone protein 4 acetylated at various lysine residues arrive from the upper compartment; a fragment acetylated at lysine-8 is shown within the pore. The peptide backbones are shown in gray, the unmodified side chains in green, and the acetylated lysines in purple.

A protein in the research spotlight: H4

In the context of the experiments now published, the Freiburg scientists devoted themselves to the investigation of the so-called histone protein H4. This protein is firmly associated with DNA in all cells with a nucleus and is one of the best-researched targets of epigenetic modifications. A region at the N-terminal end of the protein is particularly affected by these modifications. “The protein sequence there contains the amino acid lysine several times,” Behrends explains. Acetyl or methyl groups, for example, can be attached to these lysines, which are designated K8, K12 and K16 according to their position in the protein chain, as part of epigenetic modifications. Which chemical modification takes place at which lysine position is definitely of medical importance, as the Freiburg physiologist points out. “Acetylation at K16, for example, is important for human development, while methylation at K12 plays a role in the development of some prostate and lung tumors, according to the latest results from Medical Center – University of Freiburg.”

Detecting changes with the help of a nanopore

In their experiments, Behrends and his team were now able to clearly distinguish H4 fragments with or without acetylation, as well as fragments with one, two or three acetylations. Moreover, they succeeded in demonstrating that the nanopore they used was also sensitive to the site of acetylation: histone fragments with an acetyl group at K8 blocked current through the pore more strongly than those acetylated at K12, and these in turn more strongly than those with a K16 acetylation. “This kind of sensitivity is surprising in that these fragments are identical in terms of their mass and total volume,” Behrends says. Thus, the pore current appears to be sensitive not only to the size, but also to the shape of the molecule. It was equally easy to distinguish between the different variants of doubly acetylated histone fragments - K8 and K12, K8 and K16, and K12 and K16 – again, despite the identical mass. H4 fragments methylated to different extents and at different positions also blocked the current through the pore to different degrees, although not as clearly as the acetylated variants.

“We have been able to show for the first time through our experiments that nanopore analytics allows us to distinguish molecules not only by their size, but also by their shape,” summarizes study leader Behrends. Molecular dynamics simulations conducted by the research group led by Aleksei Aksimentiev from the University of Illinois in the US – also involved in the study– and show that a highly inhomogeneous electric field inside the pore plays a key role for this effect.

While the sequencing of DNA using nanopores is already established and commercialized, the development of nanopore-based analysis of proteins is just beginning, Behrends emphasizes. “The difficulty with sequencing proteins is that these are molecules with very non-uniform charge patterns.” While DNA, which is negatively charged, migrates directionally in the electric field and can thus be pulled through the pore base by base, proteins consist of building blocks made of the amino acids with different charges. As a result, directed movement in the electric field and “scanning” amino acid by amino acid is not possible. The Freiburg scientists therefore relied on a different approach for their experiments. Instead of a pore with a short constriction, as used in DNA sequencing, they used a tailor-made pore with a kind of molecular trap. “This allowed the entire protein fragment to be captured at once,” says Behrends.

It is not yet clear up to which fragment size this type of analysis can be used. However, additional experiments show that the method will also be suitable for the analysis of the H4 fragments previously used in epigenetic research. These contain 14 amino acids instead of the ten used here, and are currently investigated for epigenetic modifications with tandem mass spectrometry, a highly elaborate technique. The researchers hope that the nanopores will make the analysis much simpler, faster and more cost-effective, and that it can be carried out close to the patient.

The further development of nanopore analysis of proteins for medical diagnostics and its implementation in concrete products and services is also one of the central projects of the recently approved BMBF Cluster4Future nanodiagBW, which Behrends heads together with Prof. Dr. Felix von Stetten of the Hahn-Schickard-Gesellschaft, which is the lead for this project.