A research team at Korea Electrotechnology Research Institute (KERI) has developed a high-capacity Li-metal battery with improved rate performance and stability using a one-dimensional Li-confinable porous hollow carbon host. The paper is published as a cover paper in ACS Nano.

While the current Li-ion batteries generate energy by taking Li-ions in and out of the graphite anode based on an intercalation mechanism, the Li-metal battery does not rely on this bulky and heavy graphite but uses metallic Li itself as the anode. As the Li-metal shows 10 times higher theoretical capacity (3,860 mAh/g) than graphite (372 mAh/g), it has steadily gained much attention from areas that need high-capacity batteries, such as electric vehicles and energy storage systems.

However, lithium can form dendrites if it is not uniformly and effectively stored when cycling process, leading to large volume expansion of electrode, which in turn may shorten the battery’s cycle life and cause safety issues such as fire and explosion triggered by internal short-circuits.

Many researchers have explored Li-confinable core–shell hosts as a solution, because these structures can mitigate Li dendrite growth and volume change by reducing the effective current density and storing Li inside the core space during consecutive cycling.

However, these hosts suffer from unwanted Li growth on their surface (i.e., top plating) due to the carbon shell hindering Li-ion movement—especially at higher current densities and capacities, resulting in poor electrochemical performance.

To tackle this issue, the KERI team developed a 1D Li-confinable porous carbon structure with a hollow core, and added a small number of gold nanoparticles with Li affinity (lithiophilic) to the hollow core. The gold nanoparticles control the growth direction of Li by preferentially reacting with Li, thereby inducing Li deposition inside the core. In addition, many nano-sized pores are formed in the shell part to improve the Li-ion movement toward the core space. 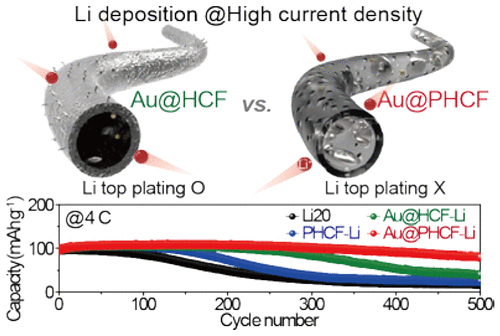 Dr. Byung Gon Kim’s team at KERI collaborated with Prof. Janghyuk Moon at Chung-Ang University for theoretical validation of the effectiveness of this material’s design. The simulation results showed that the reduced Li ion diffusion length by the shell pores and improved Li affinity by the gold nanoparticles kept Li deposition inside the structure even under high-current charging condition.

Moreover, the designed Li host showed excellent cycling performance of more than 500 cycles) under a high current density of 4C rate) (82.5% capacity retention). It is also notable that this technology meets practicality because the team used the electrospinning technique with advantages in mass production for material synthesis.

The team plans to continue with the pursuit of the commercialization of Li-metal batteries by, for example, developing functional electrolytes to ensure the stable deposition and dissolution of metallic Li.