Aresearch team led by a physicist at the University of California, Riverside, has demonstrated a new magnetized state in a monolayer of tungsten ditelluride, or WTe2, a new quantum material. Called a magnetized or ferromagnetic quantum spin Hall insulator, this material of one-atom thickness has an insulating interior but a conducting edge, which has important implications for controlling electron flow in nanodevices.

In a typical conductor, electrical current flows evenly everywhere. Insulators, on the other hand, do not readily conduct electricity. Ordinarily, monolayer WTe2 is a special insulator with a conducting edge; magnetizing it bestows upon it more unusual properties.

“We stacked monolayer WTe2 with an insulating ferromagnet of several atomic layer thickness — of Cr2Ge2Te6, or simply CGT — and found that the WTe2 had developed ferromagnetism with a conducting edge,” said Jing Shi, a distinguished professor of physics and astronomy at UCR, who led the study. “The edge flow of the electrons is unidirectional and can be made to switch directions with the use of an external magnetic field.”

Shi explained that when only the edge conducts electricity, the size of the interior of the material is inconsequential, allowing electronic devices that use such materials to be made smaller — indeed, nearly as small as the conducting edge. Because devices using this material would consume less power and dissipate less energy, they could be made more energy efficient. Batteries using this technology, for example, would last longer. 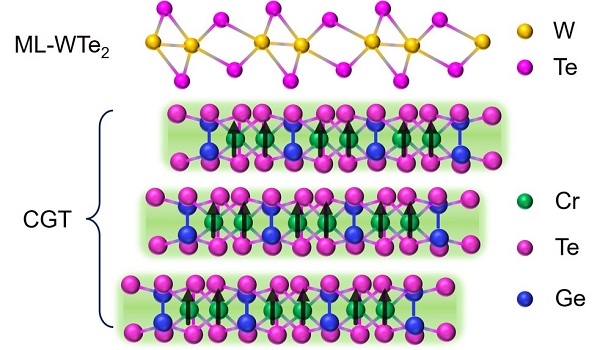 In their experiments, the researchers stacked monolayer WTe2 with Cr2Ge2Te6, or CGT.

Currently, the technology works only at very low temperatures; CGT is ferromagnetic at around 60 K (or -350 F). The goal of future research would be to make the technology work at higher temperatures, allowing for many nanoelectronic applications such as non-volatile memory chips used in computers and cell phones.

According to Shi, the conducting edge in ideal quantum spin Hall insulators comprises two narrow channels running alongside each other, akin to a two-lane highway with cars driving in opposite directions. Electrons flowing in one channel cannot cross over to the other channel, Shi said, unless impurities are introduced. The conducting edge in monolayer WTe2 was first visualized in an earlier study by coauthor Yongtao Cui, an associate professor of physics and astronomy at UCR and Shi’s colleague. 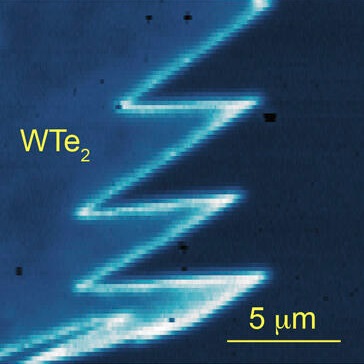 The bright zigzag lines indicate conduction features precisely at the edges of the monolayer WTe2.

“It is two channels per edge,” Shi said. “If you eliminate one channel, you end up with a current flowing only in one direction, leaving you with what is called a quantum anomalous Hall insulator, yet another special quantum material. Such an insulator has only one highway lane, to use the highway analogy. This insulator transports electrons in a fully spin-polarized manner.”

On the other hand, the magnetized WTe2 that Shi and his colleagues experimented with is called a ferromagnetic quantum spin Hall insulator, which has a conducting edge with partially spin-polarized electrons.

“In the two channels of ferromagnetic quantum spin Hall insulators, we have an unequal number of electrons flowing in opposite directions resulting in a net current, which we can control with an external magnet,” Shi said.

According to Shi, quantum materials such as WTe2 are the future of nanoelectronics.

“The CHIPS Act will encourage researchers to come up with new materials whose properties are superior to those of current silicon materials,” he said.