Magnesium diboride (MgB2) superconductors show great promise for large-scale applications. However, its critical current density (the current density above which superconductivity vanishes), Jc , at high magnetic fields in bulk form is not sufficiently high. An international research team has devised a recipe for enhancing Jc based on optimum sintering conditions and addition of nanoscale boron and dysprosium oxide impurities. This breakthrough can help realize practical applications of bulk MgB2 in medicine, transport, research, etc. 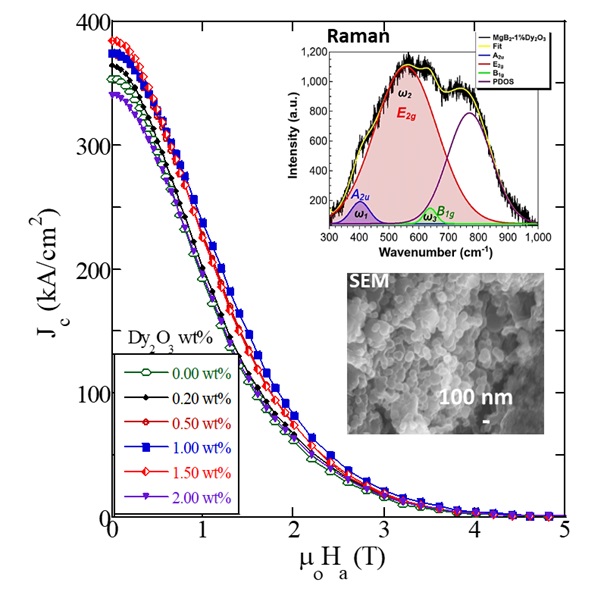 The low and high field critical current density of bulk MgB2 superconductors can be improved by a combination of optimum processing temperature and controlled addition (1Wt%) of Dy2O3 and amorphous nanometer-sized boron precursor, finds a new study by researchers from SIT.

Superconductors—wondrous materials whose resistance drop to zero below a critical temperature—show much promise to meet the growing energy demand of the global population. With potential applications in magnetic resonance imaging, nuclear magnetic resonance, magnetic drug delivery, fault current limiters, transportation (Maglev trains), and cables, there is much motivation for discovering and developing high-temperature superconductors.


In this regard, magnesium diboride (MgB2), a high-temperature superconductor, has received much attention owing to its low cost, light weight, and easy fabricability. It is posited that MgB2 has the potential to replace conventional niobium-based superconductors in practical engineering applications. However, bulk MgB2 suffers from the long-standing problem of an insufficient critical current density (the current density above which it is no longer superconducting) at high magnetic fields. This, in turn, greatly limits its large-scale applications.


To address this issue, researchers have tried adding external elements in controlled quantities, a process known as “doping,” during the synthesis of bulk MgB2, with little to no success. As Prof. Muralidhar Miryala from Shibaura Institute of Technology (SIT), Japan states, “So far, researchers have tried improving the critical current density of bulk MgB2 by doping with silicon carbide, other carbon sources, silver, transition metals etc. However, further improvement of the critical current density of MgB2 is crucial for several industrial applications.”


Not all hope is lost, however. Prof. Miryala’s team managed to show that sintering MgB2 at around 800°C for 3 hours in an argon environment can lead to a superior superconducting performance. This was linked to the formation of an optimum microstructure at such processing conditions, which was revealed to play a major role in the superconductivity of MgB2.


In a recent study published first on July 7, 2022, in Advanced Engineering Materials, Prof. Miryala’s team made another breakthrough. They found that combining optimum sintering conditions with controlled addition of nanometer-sized amorphous boron and dysprosium oxide (Dy2O3) enhanced the high-field critical current density (Jc) of MgB2 as well as its self-field. The study included Prof. M.S. Ramachandra Rao of Indian Institute of Technology Madras (IITM), India, who provided support for the global project based learning (gPBL) program at IITM , and contributions from K. Kitamoto, A. Sai Srikanth, and M. Masato from SIT, D. Dhruba from IITM.


What was remarkable about Dy2O3 as a dopant was that it had almost no effect on the superconducting transition temperature of MgB2 (which remained stable at around 38 K).


Using amorphous nanoboron as the starting ingredient, the team quantified the precise amount of Dy2O3 that needed to be added to significantly improve Jc in bulk MgB2 superconductors. By analyzing the structure and composition with techniques such as X-ray diffraction and Raman spectroscopy, and the superconducting properties of doped bulk MgB2, they found the ideal Dy2O3 doping range to be 0.5-1.5%.


With these findings, the team is excited about the future prospects of MgB2. “These results demonstrate the potential of Dy2O3 doping alongside nanoboron precursors in realizing bulk MgB2 for practical superconducting applications,” says Prof. Miryala. “Our research adds to the existing literature on ways to improve Jc and could pave the way for real-life bulk superconductors, which are a beacon for sustainable technologies.”

Read the original article on Shibaura Institute of Technology (SIT).