With new technology, LEDs can be more cost-efficient and last longer.

LED lights, which stands for light-emitting-diodes, have become ubiquitous lighting solutions for homes and businesses, but when it comes to large, high-resolution displays, traditional LEDs have documented disadvantages. LED displays use a high voltage and a factor called the internal power conversion efficiency is low, which means the energy costs to run the displays are high, the displays do not last as long, and they can run too hot.

In a paper published in Nano Research on August 26, researchers outline how a technological advance called quantum dots could be the solution to some of these challenges. Quantum dots are tiny, man-made crystals that act as semiconductors. Because of their size, they have unique properties that can make them useful in display technology. 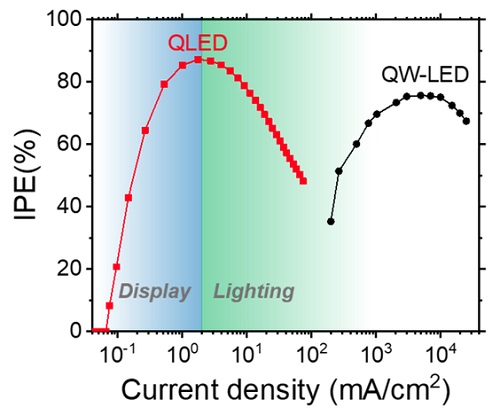 Another feature of quantum dots that make them ideal for use in LEDs is that they can be made without any defects that would affect their efficiency. Quantum dots can be engineered without impurities and surface defects. “Quantum dot LEDs (QLEDs) can achieve near unity internal power conversion efficiency at current densities suitable for display and lighting applications. Traditional LEDs, based on epitaxially-grown semiconductors, exhibit serious efficiency roll-off in the same current density range. This difference originates from the defect-free nature of high-quality quantum dots,” said Lin.

The comparably low cost of producing emissive layers with quantum dots and the ability to improve the light extraction efficiency of  QLEDs using optical engineering techniques, researchers suspect that QLEDs can be an efficient improvement over traditional LEDs for lighting, displays, and beyond. But there is still more research to be done and QLEDs, as they are now, have disadvantages that need to be overcome before they can be adopted widely.

“Our work demonstrates that thermal energy can be extracted to boost the electrical-to-optical power conversion efficiency,” said Lin. “However, the device performance at present stage is far from ideal in the sense of relatively high operating voltage and low current densities. These weaknesses can be overcome by seeking better charge transport material and engineering the interface between charge transport and quantum dot layers. The ultimate goal—achieving electroluminescence cooling devices—should be possible based on QLEDs.”