The transition metal dichalcogenide (TMD) series are a family of promising candidate materials for spintronics. A study at lightsource BESSY II has unveiled that in one of those materials even simple linear polarised light is sufficient to selectively manipulate spins of different orientations. This result provides an entirely new route for the generation of spin-polarised currents and is a milestone for the development of spintronic and opto-spintronic devices.

The second half of the 20th century was the age of electronics, electronic devices became miniaturised and even more complex, creating problems by their energy consumption and waste heat. Spintronics promises to store or transport information based on spins alone, which would work faster with much less energy. Unfortunately it is still a challenge to control spin in a material by external fields reliably and at scale. 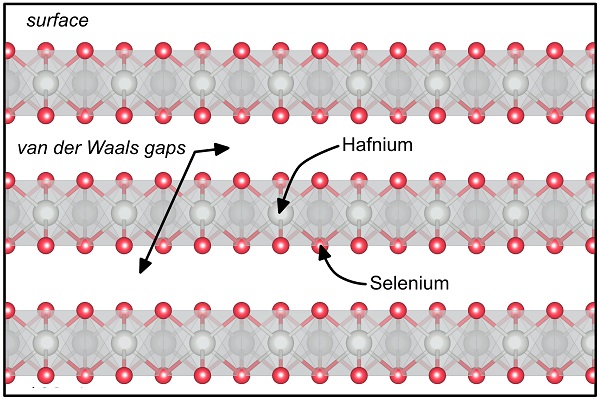 Hafniumdiselenide is a quasi twodimensional material with interesting properties for spintronics. Here, its crystal structure is shown.

Quasi 2D-materials in the focus

The transition metal dichalcogenide (TMD) series are the most intensely studied quasi two-dimensional materials beyond graphene, with charge density waves, superconductivity and non-trivial topological all commonplace across the material family. Hafnium diselenide (HfSe2) belongs to this class of materials. Now scientists at BESSY II have unveiled a new property of its electronic structure that could lead to a more convenient route to generate and control spin currents.

“In order to shift from electronics to spintronics, we have to find materials wherein spin up and spin down electrons behave differently”, first author Oliver Clark explains. There are two ways to do this, he points out: “We can either externally perturb the material so that electrons of different spins become functionally inequivalent, or we can use magnets where the electrons of opposite spins are functionally different intrinsically.” For the first method, the difficulty lies in finding suitable pairings of materials and mechanisms by which spin control can be externally imposed. For example, in the so-called 2H structured TMDs, one needs perfect single crystals and a circularly polarised light source. By contrast, the second method is much easier, but integrating magnets into devices is problematic for the operation of conventional electronic components, especially on small scales.

Linearly polarised light does do the trick

But between those two ways, a middle ground exists, at least for some select materials such as HfSe2:“If you probe this material with linearly-polarised light – which is easier to produce than circularly polarised light - the material acts as a magnet in terms of its spin-structure. So the spin-selectivity becomes very easy, but you do not have the problems associated with other magnetic properties”, Clark explains. The advantage: Crystal quality or orientation of the sample no longer matter.

This provides an entirely new route towards the generation of spin-polarised currents from transition metal dichalcogenides. The physicists are very excited about the implications of this work: “Our results are of relevance not only to physicists concerned with layered two-dimensional materials, but as well to specialists in spintronic and opto-spintronic device fabrication”, Clark hopes.