Inspired by cell membranes and Kevlar vests, Ty Christoff-Tempesta, PhD ’22, invented a nanomaterial that can be used to clean contaminated water and create recyclable plastics.

For Ty Christoff-Tempesta, PhD ’22, a summer job at a potato chip company helped him figure out what he could do to help save the planet. “Coming along in my generation, there’s this growing dread and worry about the climate crisis,” he says. Through that undergrad internship in Frito-Lay’s sustainable packaging group, he realized that a background in plastics could be used to promote sustainability.

After graduating from the University of Florida, he was drawn to Professor Julia Ortony’s nanomaterials lab in MIT’s Department of Materials Science and Engineering when she told him her group would be launching a project in water security. The first step would involve developing a nanomaterial inspired by the natural world. He was all in.

“We had the idea that cell membranes, biological membranes, are widely used in nature and have evolved over time to have a lot of really interesting properties,” he says. Of particular interest to Ortony and Christoff-Tempesta is that these natural membranes have a very high surface area relative to their mass. And subtle differences in their chemistry allow them to perform very different functions. Creating a material with a vast surface area that could be programmed to do specific things could make it possible to “do more chemistry with less material,” Christoff-Tempesta says.“Think about all that surface area being covered with some functionality that’s able to do what you want it to.”

But the fluidity that makes natural membranes so useful—for example, allowing things to move in and out of cells—also renders them unstable. Mimicking the self-assembly that occurs in nature, researchers had previously designed molecules that assemble into nanomaterials when placed in water. When these nanostructures are dried, however, they collapse. So for the first part of his PhD research, Christoff-Tempesta focused on designing a platform for creating a nanomaterial with a lot of surface area that would also be very stable. 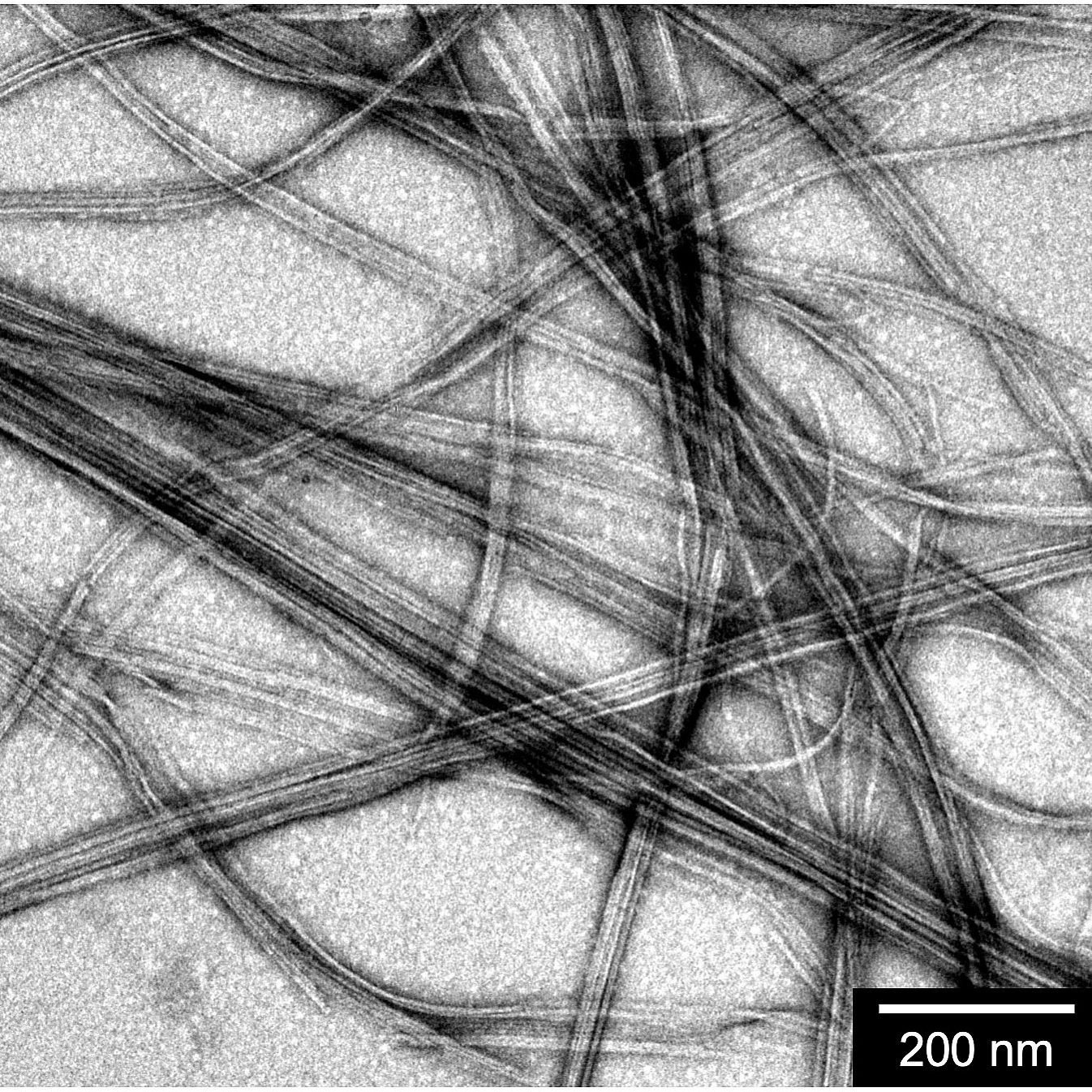 These are the first nanofibers that formed when Ty Christoff-Tempesta hit on a molecule design that self-assembles into a stable nanomaterial with high surface area.

What he came up with “combines the principles of a soap molecule and a bulletproof vest,” he says. He started with the building blocks of soap molecules, which form structures similar to cell membranes: they have hydrophilic, or water-loving, outer surfaces and hydrophobic, or water-repelling, inner surfaces. Then he replicated the intermolecular forces that make Kevlar bulletproof by adding a dense layer of strong hydrogen bonds. When the molecules he designed are put into water, they spontaneously align their hydrophobic sides away from the water, forming nanofibers that are very stable and have an exceptional amount of surface area—about 200 meters squared per gram of material, roughly the equivalent of a singles tennis court.

But creating the platform was no small feat. Adding the hydrogen bonds made it difficult to predict which molecule design would produce the nanofibers he was after. So he spent the first year of his PhD in trial-and-error mode, synthesizing compound after compound in the lab. Nothing was working. After what he calls “a year of failures,” he decided one day—partly out of frustration and partly out of curiosity—to test one of the intermediate compounds in the multistep process he’d been following to create the compounds he thought he needed. He put it in water, looked at it under a transmission electron microscope, and saw beautiful nanostructures form.

Elated, he sent a Slack message to the lab announcing the discovery. Ortony printed the accompanying image of the nanofibers, which remains posted on the wall in the lab to this day. Christoff-Tempesta considers the spur-of-the-moment decision to test that particular compound “a really fortuitous discovery that unlocked all of the work that became the rest of my PhD.”

Once he’d developed the platform to create the stable, high-surface-area nanomaterial, he set about “functionalizing” its surface by adding chemical groups that could do something useful. He decided to design a version that could remove lead from water. Some parts of the world, such as Bangladesh, have high concentrations of heavy metals in drinking water—a problem exacerbated by climate change because higher temperatures cause more heavy metals to leach out of bedrock, he says. And as people in Flint, Michigan, know too well, lead from old pipes can also jeopardize the water supply. 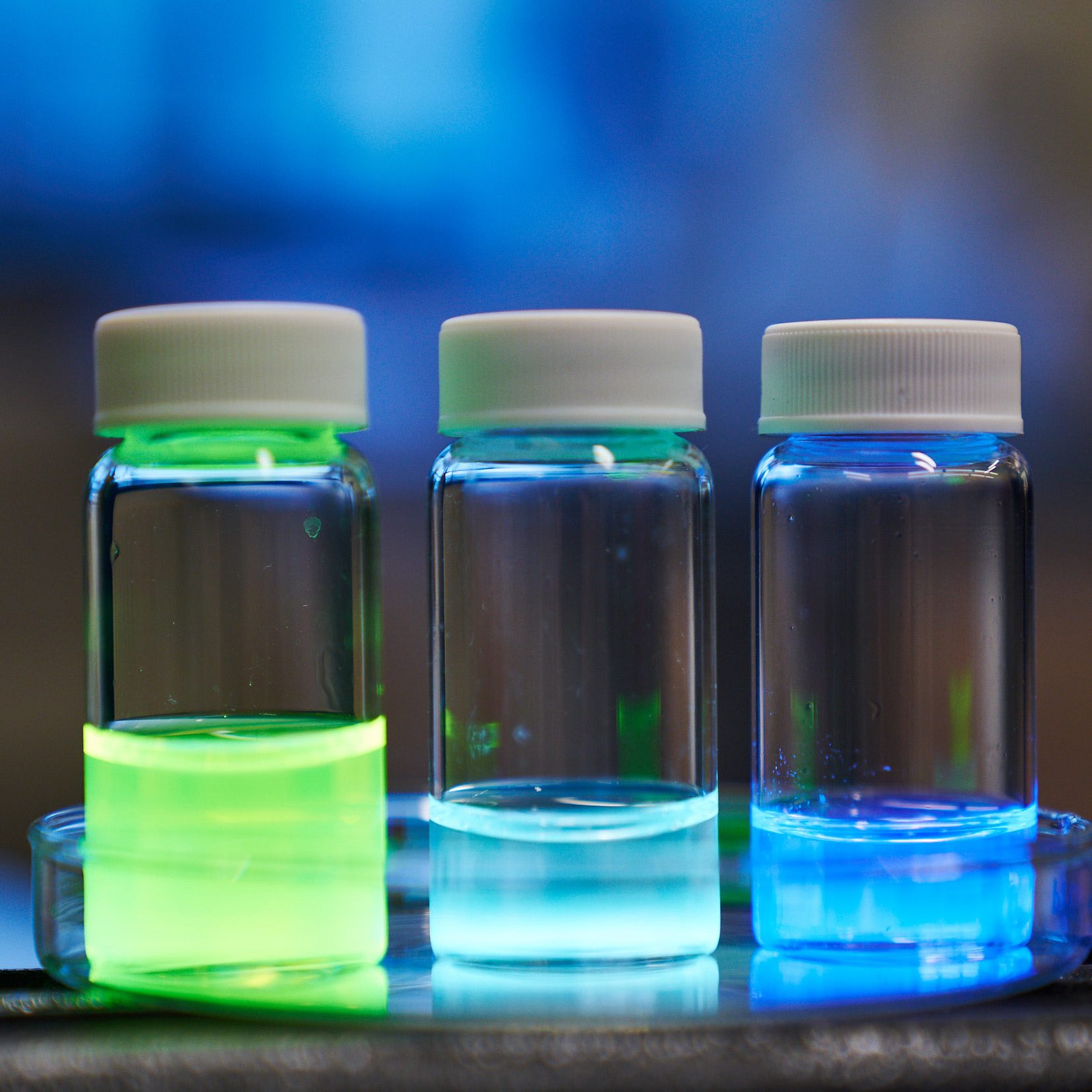 Fluorescent dyes can help demonstrate the desired properties of nanomaterials.

To program his nanomaterial to remove lead, he turned to pharmaceutical compounds used to treat heavy-metal poisoning and to prevent the metals in MRI contrast dyes from leaching into patients’ bodies. He tethered those compounds to the surface of the nanofibers and found that a gram’s worth of his nanomaterial was able to treat up to 2,500 liters of water contaminated with lead at a level of 50 parts per billion. With further tweaking, he doubled its effectiveness, so that a single gram can clean up 5,000 liters—the equivalent of 32 bathtubs—of contaminated water. He plans to develop his nanofibers into a fabric that could be made into filtering devices.

Meanwhile, other members of the Ortony lab are using his platform to develop recyclable plastics and battery materials that can be repeatedly assembled and disassembled without damage.

In his time at MIT, Christoff-Tempesta got involved in other sustainability work as well. As an intern at the Massachusetts State House, he provided scientific insight to legislators working on a bill to limit single-use plastics. He developed and taught an experiential sustainability class for MIT undergrads. And he competed in sustainability challenges, winning the grand prize in MIT’s annual MADMEC challenge in 2019 with teammates and fellow PhD students Margaret Lee and Sara Sheffels. Their team, called ecoTrio, developed a material that performs like existing single-use plastics but is biodegradable and can be made from renewable resources on existing manufacturing equipment.

Christoff-Tempesta expects to work on sustainable plastics when he begins his postdoc in chemical engineering at the University of Delaware this fall. He says his experiences at MIT solidified his interest in sustainability research—and confirmed that his work could make a difference. “When we think about climate change or the environment, it can feel very overwhelming, almost immobilizing, trying to figure out how can you as one person do something about this when there are so many things to be concerned about at once,” he says. “I realized that by focusing on what I was good at—and also having all these people around me to encourage me and bounce ideas off along the way—there was a way for me to contribute.”