Researchers at Oregon State University and Oregon Health & Science University have developed a promising, first-of-its-kind messenger RNA therapy for ovarian cancer as well as cachexia, a muscle-wasting condition associated with cancer and other chronic illnesses.

The treatment is based on the same principles used in SARS-CoV-2 vaccines, and the scientists say mRNA technology, though still in its infancy in terms of therapeutic application, holds tremendous clinical potential for the management of disease. Messenger RNA carries instructions to cells regarding the manufacture of proteins. 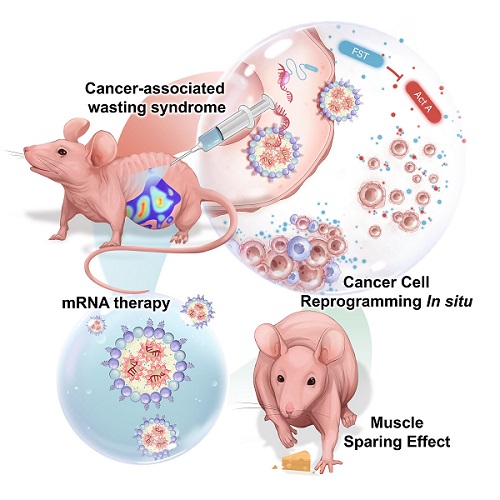 The findings, achieved through a mouse model and published in the journal Small, are important because ovarian cancer is a particularly deadly form of cancer, with a five-year survival rate of less than 30% if it has spread beyond the ovaries.

“Usually patients don’t learn they have ovarian cancer until it’s at an advanced stage and has reached the abdominal cavity,” said Oleh Taratula, an OSU College of Pharmacy professor based in Portland. “Treatment has been limited to surgical removal of as much of the cancer as possible, followed by chemotherapy. Most patients do initially respond to chemotherapy, but the responses generally aren’t long lasting.”

In addition to cancers of the ovaries, stomach, lungs and pancreas, cachexia is associated with many other chronic illnesses including multiple sclerosis, renal failure, cystic fibrosis, Crohn’s disease, rheumatoid arthritis and HIV.

People with cachexia will lose weight even if they eat, and not just fat but muscle mass as well. The debilitating syndrome kills as many as 30% of the cancer patients it afflicts.

The new therapy developed by Taratula, Daniel Marks of OHSU and collaborators at the two universities is based on lipid nanoparticles, or LNPs, capable of delivering mRNA that triggers the production of the follistatin protein within cancer clusters. The research is part of a five-year, $2.3 million National Institutes of Health grant that resulted from a collaboration between Taratula and Marks.

The LNPs are administered via injection into the peritoneal cavity, which contains the abdominal organs. The follistatin produced following injection works against another protein, activin A, whose elevated numbers are linked with aggressive ovarian cancer and its associated cachexia.

“By changing the characteristics of the cancer cells, mRNA treatment can lead to a range of positive effects,” Taratula said. “It prevents the buildup of ascites – abdominal fluid containing cancer cells. It also delays disease progression and induces the formation of small, solid tumors that don’t adhere to organs and thus can be more easily removed. And it combats cachexia by helping to preserve muscle mass.”

Cachexia and malnutrition have huge implications for cancer patients, he explains. Many of those patients are “in a state of nutritional bankruptcy and chronic wasting,” and that hurts their ability to benefit from treatment.

“Chemotherapy remains the frontline treatment for metastatic disease but it comes at a high cost – loss of muscle mass, depletion of fat stores, fatigue and systemic inflammation,” Marks said. “There is a clear need to find new therapies and drug combinations that improve the efficacy and tolerability of chemotherapy, and we think we’ve taken a big step in that direction.”

The mouse model showed that mRNA therapy worked well in combination with cisplatin, the current standard of care chemotherapy treatment for ovarian cancer. Mice receiving both therapies in concert lived longer and had less muscle atrophy than those receiving just one of the treatments.