Researchers found a new way to reduce carbon dioxide (CO2) emissions by wrapping copper nanocubes with an organic layer, solving instability and selectivity problems with copper nanocubes in catalysis, and improving how this electrocatalyst converts CO2 into organic molecules.

As the need to mitigate climate change accelerates, scientists are trying to find new ways to reduce carbon dioxide emissions. One process, called electrochemical reduction or electrolysis, uses electricity and a catalyst to convert carbon dioxide into organic products that can be used in other ways. Unlike conversion between water and hydrogen, chemical recycling of carbon dioxide can produce various useable products because carbon can develop vast varieties of organic structures.

One way to achieve electrochemical reduction of carbon dioxide uses very tiny pieces of copper. While bulk copper metal has known to convert carbon dioxide into various organic molecules, these small pieces of copper can further improve catalytic activity not only by the increase of its surface area but also by the unique electronic structure of copper emerged from nanosizing. 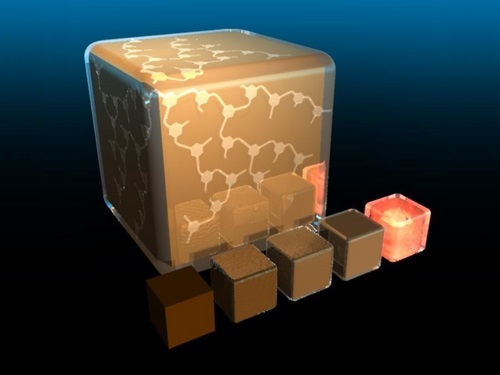 The organic layer grown on cuprous oxide nanocube improved CO2 reduction selectivity of Cu species wrapped by it, and also maintained its cubic structure during catalysis.

In a paper published in Chemical Communications on June 23, researchers explain a process for improving the way the copper nanocubes convert carbon dioxide, by improving their selectivity. Selectivity refers to the ability of a catalyst to produce a desired product over unwanted byproducts.

“Recent developments in carbon dioxide reduction using copper electrocatalysts can convert the gas into hydrocarbons and alcohol, but the selectivity of various copper-related electrocatalysts developed so far is still elusive, because they tend to lose activity through structural reorganization during the catalysis,” said Shoko Kume, associate professor at the Graduate School of Advanced Science and Engineering at Hiroshima University in Japan.

Researchers discovered that this problem can be solved by growing an organic layer on top of the nanocubes. First, a pair of monomers were added to the copper oxide nanocube. These monomers were tethered by the chemistry on copper oxide and an even organic layer grew on the surface of the cubes. This new organic layer helps improve carbon dioxide reduction selectivity, in part because carbon dioxide has poor solubility and the organic layer the researchers produced has hydrophobic properties, meaning it repels excessive water, from which unwanted hydrogen is produced. “The wrapping improved carbon dioxide reduction of the copper beneath this organic layer by suppressing hydrogen evolution, and also maintained the cubic structure throughout the catalyst operation,” said Kume.

Another important factor for improving the quality of the organic layer was the temperature at the time of the growth, with the best results found at room temperature. Under the best conditions, the layer is flat with a thickness of several molecules. Even the thin layer readily permeates carbon dioxide and allows the wrapped copper to undergo electroreduction, protecting the metals and helping the cubes retain their shape.

Currently, copper nanocubes are not widely adopted as a method for carbon dioxide reduction because they are unstable and do not have the level of selectivity needed to effectively recycle the carbon dioxide into other chemical products. The findings of this paper highlight a new method of creating an electrocatalyst using copper nanocubes that can solve some of these problems. Researchers also point out, looking ahead, that the method can be modified to control both the selectivity and improve how the catalysts work.

“Our current method can introduce a vast variety of organic structures within the layer, which can be involved in the carbon dioxide reduction process to control its selectivity and efficiency,” said Kume. “It can also be used to control the dynamic behavior of metal species during catalysis, which can develop catalysts with long life and a tolerance for impurities.”