Heat dissipation is essential for maintaining the performance of electronic devices. However, efficient heat dissipation is a major concern for thin-film electronics since conventional heat sinks are bulky. Researchers from Japan found a solution to this problem in sea squirts or ascidians. They prepared flexible nanocomposite films using an ascidian-derived cellulose nanofiber matrix and carbon fiber fillers. The prepared films demonstrate excellent anisotropic in-plane heat conduction and the carbon fiber fillers inside are reusable.

The last few decades have witnessed a tremendous advance in electronics technology, with the development of devices that are thinner, lightweight, flexible, and robust. However, as the devices get thinner so does the space for accommodating the internal working components. This has created an issue of improper heat dissipation in thin-film devices, since conventional heat sink materials are bulky and cannot be integrated into them. Thus, there is a need for thermal diffusion materials that are thin and flexible and can be implemented in thin-film devices for efficient heat dissipation.

Currently, several substrate materials can act as heat diffusers as thin films, but most diffuse heat in the in-plane direction isotropically. This, in turn, could create thermal interference with neighboring components of a device. "For a substrate on which multiple devices are mounted in high density, it is necessary to control the direction of thermal diffusion and find an effective heat removal path while thermally insulating between the devices. The development of substrate films with high anisotropy in in-plane thermal conductivity is, therefore, an important target," explains Junior Associate Professor Kojiro Uetani from Tokyo University of Science (TUS) in Japan, who researches advanced materials for thermal conductivity and formerly belonged to SANKEN (The Institute of Scientific and Industrial Research), Osaka University.

Many polymer composites with thermally conductive fillers have been proposed to enhance thermal conductivity. However, there are few reports on materials with particulate or plate-like fillers that exhibit thermal conductivity anisotropy, which is important to prevent thermal interference between adjacent devices. Fibrous fillers such as carbon fibers (CF), on the other hand, can provide in-plane anisotropy in two-dimensional materials due to their structural anisotropy.

It is also important to select matrix with high thermal conductivity. Cellulose nanofibers (CNFs) extracted from the mantle of ascidians has been reported to exhibit higher thermal conductivity (about 2.5 W/mK) than conventional polymers, making it suitable for use as a heat-dissipating material. As indicated by the ability to write with a pencil on paper, cellulose has a high affinity for carbon materials and is easy to combine with CF fillers. For example, hydrophobic CF cannot be dispersed in water by itself, but in the presence of CNF, it is easily dispersed in water. Accordingly, the team chose bio-based ascidian―sea squirt―derived CNFs as the matrix. 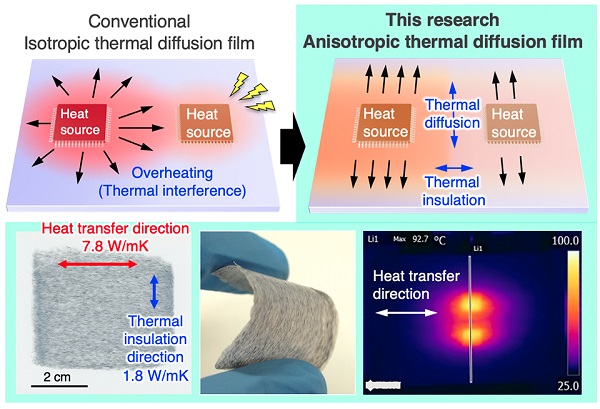 For material synthesis, the team prepared an aqueous suspension of CFs and CNFs and then used a technique called liquid 3D patterning. The process resulted in a nanocomposite consisting of a cellulose matrix with uniaxially aligned carbon fibers. To test the thermal conductivity of the films, the team used laser-spot periodic heating radiation thermometry method.

They found that the material showed a high in-plane thermal conductivity anisotropy of 433% along with conductivity of 7.8 W/mK in the aligned direction and 1.8 W/mK in the in-plane orthogonal direction. They also installed a powder electroluminescent (EL) device on a CF/CNF film to demonstrate the effective heat dissipation. In addition, the nanocomposite film could cool two closely placed pseudo heat sources without any thermal interference.

Apart from the excellent thermal properties, another major advantage of the CF/CNF films is their recyclability. The researchers were able to extract the CFs by burning the cellulose matrix, allowing to be reused. Overall, these findings can not only act as a framework for designing 2D films with novel heat dissipating patterns but also encourage sustainability in the process. "The waste that we humans generate has a huge environmental impact. Heat transfer fillers, in particular, are often specialized and expensive materials. As a result, we wanted to create a material that does not go to waste after usage but can be recovered and reused for further applications," concludes Dr. Uetani.

Indeed, with cooler smartphones and lower waste, it's a win-win for everyone!