Researchers at QuTech—a collaboration between the Delft University of Technology and TNO—have engineered a record number of six, silicon-based, spin qubits in a fully interoperable array. Importantly, the qubits can be operated with a low error-rate that is achieved with a new chip design, an automated calibration procedure, and new methods for qubit initialization and readout. These advances will contribute to a scalable quantum computer based on silicon. The results are published in Nature today.

Different materials can be used to produce qubits, the quantum analogue to the bit of the classical computer, but no one knows which material will turn out to be best to build a large-scale quantum computer. To-date there have only been smaller demonstrations of silicon quantum chips with high quality qubit operations. Now, researchers from QuTech, led by Prof. Lieven Vandersypen, have produced a six qubit chip in silicon that operates with low error-rates. This is a major step towards a fault-tolerant quantum computer using silicon.

To make the qubits, individual electrons are placed in a linear array of six ‘quantum dots’ spaced 90 nanometers apart. The array of quantum dots is made in a silicon chip with structures that closely resemble the transistor – a common component in every computer chip. A quantum mechanical property called spin is used to define a qubit with its orientation defining the 0 or 1 logical state. The team used finely-tuned microwave radiation, magnetic fields, and electric potentials to control and measure the spin of individual electrons and make them interact with each other. 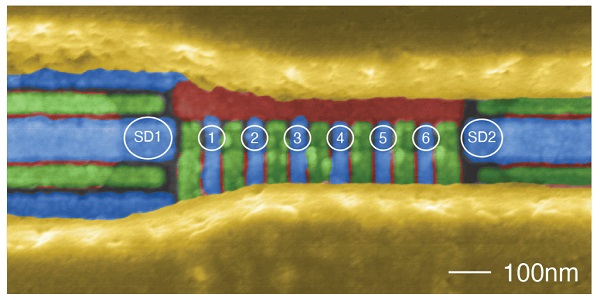 Image of the six qubit quantum processor described in this article. The qubits are created by tuning the voltage on the red, blue and green wires on the chip. The structures called SD1 and SD2 are extremely sensitive electric field sensors, which can even detect the charge of a single electron. These sensors together with advanced control schemes allowed the researchers to place individual electrons at the locations labeled (1)-(6), which were then operated as qubits.

“The quantum computing challenge today consists of two parts,” explained first author Mr. Stephan Philips. “Developing qubits that are of good enough quality, and developing an architecture that allows one to build large systems of qubits. Our work fits into both categories. And since the overall goal of building a quantum computer is an enormous effort, I think it is fair to say we have made a contribution in the right direction.”

The electron’s spin is a delicate property. Tiny changes in the electromagnetic environment cause the direction of spin to fluctuate, and this increases the error rate. The QuTech team built upon their previous experience engineering quantum dots with new methods for preparing, controlling, and reading the spin states of electrons. Using this new arrangement of qubits they could create logic gates and entangle systems of two or three electrons, on demand.

Quantum arrays with over 50 qubits have been produced using superconducting qubits. It is the global availability of silicon engineering infrastructure however, which gives silicon quantum devices the promise of easier migration from research to industry. Silicon brings certain engineering challenges, and until this work from the QuTech team only arrays of up to three qubits could be engineered in silicon without sacrificing quality.

“This paper shows that with careful engineering, it is possible to increase the silicon spin qubit count while keeping the same precision as for single qubits. The key building block developed in this research could be used to add even more qubits in the next iterations of study,” said co-author Dr. Mateusz Madzik.

Read the original article on QuTech.