Physics team from the universities of Kiel and Hamburg discovers new class of magnetic lattices.

For about ten years, magnetic skyrmions - particle-like, stable magnetic whirls that can form in certain materials and possess fascinating properties - have been a focus of research: electrically easily controlled and only a few nanometers in size, they are suitable for future applications in spin electronics, quantum computers or neuromorphic chips. These magnetic whirls were first found in regular lattices, so-called skyrmion lattices, and later individual skyrmions were also observed at the University of Hamburg. Researchers from Kiel University and the University of Hamburg have now discovered a new class of spontaneously occurring magnetic lattices. They are related to skyrmion lattices, but their "atomic bar magnets" on the nanometer scale are oriented differently. A fundamental understanding of how such complex spin structures form, how they are arranged and remain stable is also needed for future applications. The results are published in the current issue of Nature Communications.

Attaching magnets to a refrigerator or reading data from a hard drive is only possible because of a quantum mechanical exchange interaction between the atomic bar magnets on the microscopic scale. This interaction, discovered by Werner Heisenberg in 1926, explains not only the parallel alignment of atomic bar magnets in ferromagnets, but also the occurrence of other magnetic configurations, such as antiferromagnets. Today many other magnetic interactions are known, which has led to a variety of possible magnetic states and new research questions. This is also important for skyrmion lattices. Here the atomic bar magnets show in all spatial directions, which is only possible due to the competition of different interactions. 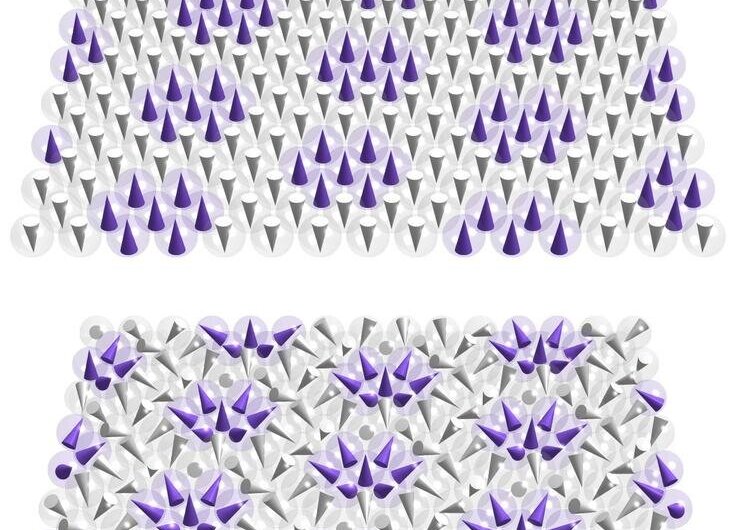 The image shows the different orientation of atomic "bar magnets" of an iron film: In a magnetic mosaic lattice (above), they are oriented in groups either upwards (purple) or downwards (white). In the skyrmion lattice (below), on the other hand, they point in all directions.

"In our measurements, we found a hexagonal arrangement of magnetic contrasts, and at first we thought that was also a skyrmion lattice. Only later did it become clear that it could be a nanoscale magnetic mosaic," says PD Dr. Kirsten von Bergmann. With her team from the University of Hamburg, she experimentally studied thin metallic films of iron and rhodium using spin-polarized scanning tunneling microscopy. This allows magnetic structures to be imaged down to the atomic scale. The observed magnetic lattices occurred spontaneously as in a ferromagnet, i.e., without an applied magnetic field. "With a magnetic field, we can invert the mosaic lattices, because the opposing spins only partially compensate for each other," explains Dr. André Kubetzka, also from the University of Hamburg.

Based on these measurements, the group of Prof. Dr. Stefan Heinze (Kiel University) performed quantum mechanical calculations on the supercomputers of the North German High Performance Computing Network (HLRN). They show that in the investigated iron films the tilting of the atomic bar magnets in a lattice of magnetic vortices, i.e. in all spatial directions, is very unfavorable. Instead, a nearly parallel or antiparallel alignment of neighboring atomic bar magnets is favored.

"This result completely surprised us. A lattice of skyrmions was thus no longer an option to explain the experimental observations," says Mara Gutzeit, doctoral researcher and first author of the study. The development of an atomistic spin model made clear that it must be a novel class of magnetic lattices, which the researchers called "mosaic lattices". "We found out that these mosaic-like magnetic structures are caused by higher-order exchange terms, predicted only a few years ago," says Dr. Soumyajyoti Haldar from the group of Kiel.

"The study impressively shows how diverse spin structures can be and that a close collaboration between experimentally and theoretically working research groups can be really helpful for their understanding. In this field a few more surprises can be expected in the future," states Professor Stefan Heinze.